Paul Westphal was part of an infamous trade that brought him to Seattle as a player. He also coached the Sonics from 1998-2000. Now he’s in the Naismith Hall of Fame. 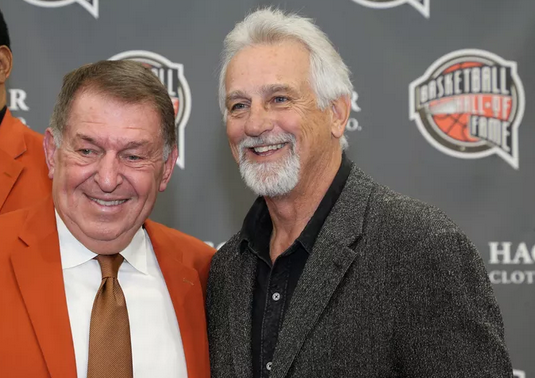 MINNEAPOLIS — Paul Westphal has a trivia question he loves to ask.

“Did you know that I was traded twice for hall of famers?’’ he said.

In 1975, Westphal was dealt from the Boston Celtics to the Phoenix Suns for Charlie Scott. In 1980, he went from the Suns to the Seattle SuperSonics for Dennis Johnson.

After Saturday’s news, the trivia question could be altered to: “Which hall of famers were traded for one another?’’

That’s because Westphal, a star NBA guard from 1972-84, was named to the Naismith Memorial Basketball Hall of Fame himself.

“It’s humbling, it really is,’’ Westphal said at U.S. Bank Stadium at the Final Four. “There are a lot of people that it doesn’t happen for, and who are deserving. It was never a goal of mine, because it’s kind of an unattainable goal. It’s a thrill.’’

Westphal played for the Sonics in 1980-81, struggling through an injury-riddled season in which he played just 36 games and averaged 16.7 points. He then signed as a free agent with the New York Knicks. Johnson went on to star with Larry Bird on the great Celtics teams of the 1980s. 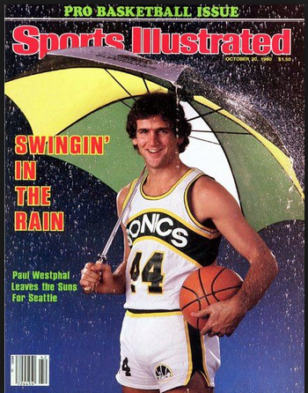 Paul Westphal made the cover of Sports Illustrated after he moved to Seattle. / SI.com

Westphal eventually returned to Seattle. He served as the Sonics’ head coach from 1998-2001, compiling a 77-71 record.

Westphal’s best days were with the Suns from 1975-80, making four All-Star games. He still lives in Scottsdale. He also coached the Suns to the NBA Finals in 1993.

But Westphal, 68, still has a soft spot for Seattle. It pains him that the city hasn’t had an NBA team since the Sonics left in 2008 for Oklahoma City.

“I can’t even comprehend that they don’t have a team,’’ he said. “It’s one of the best basketball towns there’s ever been. It’s a disgrace between the politicians and whatever forces that were at work that allowed them to leave, and that is keeping them from having a team.

“I don’t use the word disgrace a lot but it is a disgrace. They need a team in Seattle and there’s no excuse for it not being there.’’

Westphal, who averaged 15.6 points in his career, was one of two former Sonics named Saturday to the hall, joining center Jack Sikma, who played in Seattle from 1977-86.

Others in the Class of 2019 were former NBA stars Sidney Moncrief, Bobby Jones, Vlade Divac, Carl Braun and Chuck Cooper, former NBA coach Bill Fitch, former women’s star Teresa Weatherspoon and contributor Al Attles. Two teams were named in Tennessee A&I of the 1950s and Wayland Baptist, a women’s powerhouse from the 1950s to the 1970s.

Westphal came to Seattle after the Sonics lost in the NBA Finals in 1978, won the championship in 1979 and lost in the Western Conference finals in 1980. There was so much optimism when Westphal arrived that he was featured on the cover of Sports Illustrated.

But the 1980-81 season didn’t go as planned, even though Westphal did make the All-Star Game. After a three-year run at the top of the league, the Sonics went 34-48, and Westphal sat out the final 21 games due to injury.

“It was frustrating because we had such high hopes,’’ Westphal said. “I went to a beautiful team and a beautiful city, and I played in nine games and I developed a (foot) stress fracture . . . It was just a real frustrating situation for management and for the players and for me. It’s something that’s a big regret of my life that things couldn’t have been different, but what are you going to do?’’

Said Westphal: “It was one of those things that I wish it could have been different, because I love Seattle and I loved being with the Sonics.”