Matisse Thybulle was all over the court for the Huskies this season and is now all over the post-season trophies, winning a second defender of the year award. 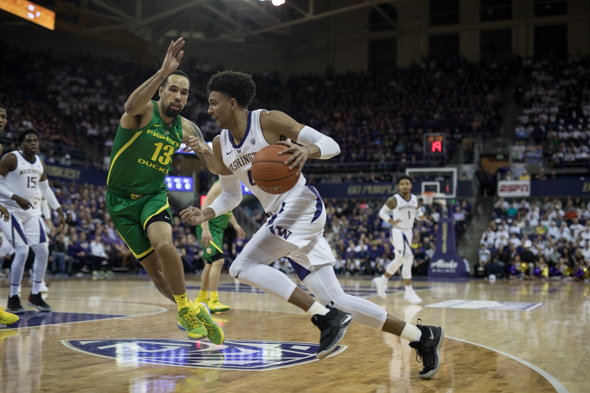 Matisse Thybulle was the only player in the country to rank in the top 20 in steals and blocks. / Alan Chitlik, Sportspress Northwest

The college basketball nation is recognizing what the Pac-12 Conference has known for the past couple of years — Matisse Thybulle is the best there is when it comes to defense.

The University of Washington senior swingman was named winner of the 2019 Naismith Defensive Player of the Year Award, beating out some higher profile competitors such as Brandon Clarke of Gonzaga, De’Andre Hunter of Virginia and Zion Williamson of Duke.

The award, presented Sunday by the Atlanta Tipoff Club in Minneapolis, site of the Final Four, is in its second year. Last week, he won the Lefty Driesell Award for the same feat, presented since 2010 by CollegeInsider.com.

“Defense is exciting, and I believe we showed people that this year,” Thybulle said in a release by UW. “I’m just happy to represent this program on this stage because there are big things coming for the Huskies.

“I’ve put in the hard work day in and day out, and I have to credit my teammates because they have always had my back, both on and off the court. I was only able to accomplish this because of them.”

The two-time Pac-12 Defensive Player of the Year had 126 steals and 83 blocks for a combined takeaway total of 209, which led all finalists for the Naismith honor. His steals set the league single-season record, previously held by Jason Kidd of Cal (1992-93), and are the 10th most in a single season in NCAA history.

“What an incredible honor for Matisse and so well deserved,” coach Mike Hopkins said. “I’m so glad the Naismith Defensive Player of the Year award exists now because it really recognizes the effort that goes into the sport.

“Defense is 50 percent of the game, and what Matisse has done over his career is unlike anything I’ve ever seen in my 24 years of coaching.”

Thybulle, from Issaquah and Eastside Catholic High School, was the only player in the past 20 seasons to record 100 steals and 70 blocks in the same year, and is also one of three in that span to average two blocks and two steals in a season, joining Shane Battier of Duke (1999-2000, 2000-01) and Nerlens Noel of Kentucky (2012-13).