It would have been intriguing to see what the Seahawks might have done with 3 first-round picks from Oakland. But making Russell Wilson the NFL’s highest-paid player was better. 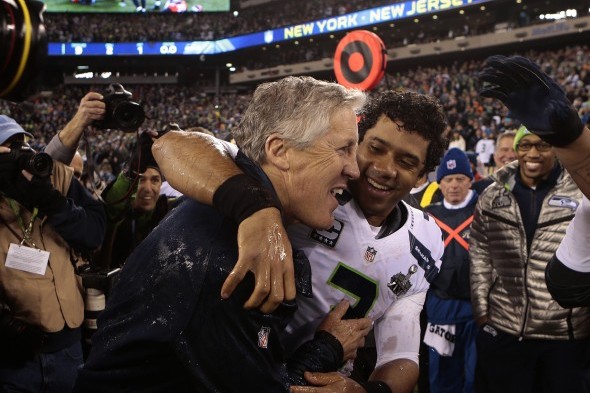 Pete Carroll and Russell Wilson: Back to the future. / Corky Trewin, Seattle Seahawks

From the perspective of successful football business, here’s the best thing about the Russell Wilson contract extension:  He’s the main reason the Seahawks have a +269 point differential in the fourth quarter since 2012, best in the NFL.

Best thing about the deal from fans’ perspective: They are spared from the specter of Wilson playing on what amounts to a series of three consecutive one-year contracts (this season plus two via franchise tags) that would have kept 12s in tinfoil hats, speculating conspiratorially whether Wilson’s play choices or decisions to avoid contact were “business decisions” to save himself or to improve his personal stats at the expense of the team’s best interests.

Best thing about the deal from general manager John Schneider’s perspective: He won’t be tempted to take a trade offer in the next 10 days for Wilson from Jon Gruden of the top three Raiders’ choices (Nos. 4, 23 and 27) to do what Schneider does worst: Draft in the first round.

Best thing about the deal from the perspective of owner Jody Allen and the Vulcan empire: Asset appreciation, and continuing control of the best anti-Klingon weapon.

Best thing about the deal from coach Pete Carroll’s perspective: Keeps alive the best shot to return his team to the Super Bowl and, with the game on the line, completing a 1-yard touchdown pass for the win.

Best thing about the deal from Ciara’s perspective: She cannot justifiably be called Yoko Ono.

Best thing about the deal from Wilson’s perspective: He’ll have enough money to jump-start his post-career plans to be a bigger-than-sports mogul. Whether that means buying out shareholders when Boeing fails, or buying out Mark Zuckerberg when Facebook fails, is hard to say. But both could use someone experienced in comebacks.

Best thing about the deal from local media’s perspective: The story is over. Can you imagine three years of clumsy questions and vapid answers?

A fair amount of credit for most of these developments goes to Wilson’s agent, Mark Rodgers, mostly because — according to him — he listened to the Prime Directive from his client.

“Russell wanted more than anything to stay in Seattle,” Rodgers told NFL.com’s Ian Rapoport. “My job was to make sure of it, while doing the best deal possible. The no-trade clause clinched it. We didn’t want to get to draft night three years from now and have his name in trade rumors. Once they offered that, we knew we would have a deal.”

If the sentiment was indeed the genuine desire if Wilson and his wife, it took pressure off the negotiations to create a new NFL paradigm.

The rumor over the past few days said the talks included a proposal for an escalator clause that would have tied Wilson’s salary increases to the presumed annual increase of the players’ share of the salary cap. The proposal would have been unprecedented for the Seahawks and the rest of the league, complicating the already brutal chore of hiring enough premium players around the star QB who are good enough to contend for a championship.

But there is no escalator clause, although Wilson’s salary will nevertheless remain the proverbial pig in the payroll python.

The no-trade clause was part of a $140 million, four-year extension that gives Wilson the most guaranteed money ($107 million) and highest average annual value ($31.5 million) in NFL history. It includes a $65 million signing bonus, payable this year, and keeps Wilson a Seahawk through the 2023 season, when he’s 35. And there are no guarantees beyond the first year except for injury, in keeping with team policy.

The length of the extension goes beyond the expiration of Carroll’s current contract, and will come after a new collective bargaining agreement with the players union. That means the infusion of anticipated gambling revenues eagerly anticipated by NFL clubs will have no impact on Wilson’s fixed costs.

He’ll make $157 million in the next five years, including the $17 million he was set to earn in 2019. The deal reportedly was completed just before midnight Monday, after which a sleepy-eyed Wilson tweeted a video about it as he lay in bed with Ciara (suitable for work).

The worst thing about the deal, of course, is the consequence to the rest of the roster under the NFL’s hard cap.

The Seahawks also want to extend the contracts of LB Bobby Wagner and DT Jarran Reed, and they have already committed the franchise tag to pay DE Frank Clark $17 million for next season. The market for Clark’s position was recently set high by the Cowboys’ re-signing of DeMarcus Lawrence to a $105 million, five-year deal, with $65 million in guarantees.

Had the Seahawks elected to trade Wilson, who is at his career pinnacle from the standpoints of age, health and skill, they would have had the money to re-sign easily the three top defenders, then add a bounty of picks in a draft where right now they have a league low of four choices.

Despite that ransom of potential talent, Schneider and Carroll knew they had the rarest commodity in team sports, a premium franchise QB, and would go to their football graves answering the question, “What were you thinking?!” if Wilson were dealt.

So it may mean the Seahawks must now trade sackmaster Clark, perhaps for picks in the second and third rounds in a draft heavy with quality pass rushers. It’s part of the way for the Seahawks to get whole after blasting a magnum hole in the budget.

There are no workarounds for the facts that Wilson has the most wins by a quarterback in his first seven seasons in NFL history, and that his career QB rating of 100.3 is second in league annals only to Green Bay’s Aaron Rodgers, who is 35.

The hardest part is not funding a franchise QB. It’s finding him.