Seahawks have four prime-time games in a row

The NFL has booked the Seahawks for four prime-time games in a row (five total) around a Nov. 18 bye. They also have four road games starting at 10 a.m. PT. 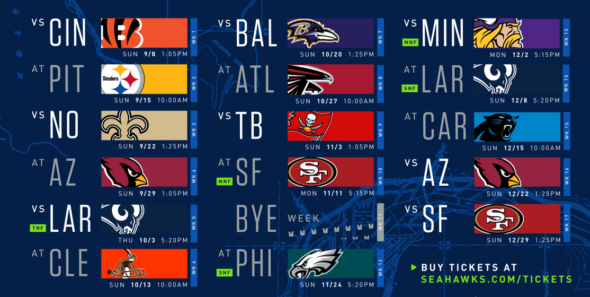 The Seahawks open at home for just the seventh time in the past 20 seasons. / Seahawks.com

The Seahawks had better be good, because late next season, they’re in for a long-term national closeup. Four games in a row, wrapped around a Week 11 bye, will be in prime-time. Since the Seahawks have a league-best 26-5-1 in the big shows, the pressure figures to be manageable.

At least now they have the game’s leading man, the handsomely compensated Russell Wilson.

The 2019 NFL schedule released Wednesday night shows a Week 10 Monday night game at San Francisco Nov. 11, followed by the Nov. 18 bye. The Seahawks play the Sunday night game at Philadelphia Nov. 24. Another Monday night game, this one at the Clink, is Dec. 2 versus Minnesota. The run of spotlights concludes Dec. 8 in the Los Angeles Coliseum against the Rams.

The Rams and Seahawks also meet Sunday night, Oct. 3, at the Clink.

The five prime-time games are the maximum the NFL allows, and is the seventh year in a row the Seahawks will play four or more. The three on the road are the most for the Seahawks since 2014. Ten other teams also have five.

For fans who believe in the bad juju of disrupted body clocks, the Seahawks have four road games that start at 10 a.m. PT: Week 2 at Pittsburgh, Week 6 at Cleveland, Week 8 at Atlanta and Week 15 at Carolina. That game at Carolina — the Seahawks’ 10th against the Panthers since 2010, including postseason — is the second part of the only back-to-back road trips on the slate, following the second Rams game.

The return of FS Earl Thomas is Oct. 20, when the Baltimore Ravens show up, and CB Richard Sherman will be at the season finale with the 49ers Dec. 29.

The Seahawks and the University of Washington do not have road trips that line up this season. But Washington State football fans could have a long weekend in the Bay Area. The Cougars play at Cal Nov. 9, ahead of the Seahawks-49ers Nov. 11.