Keeping the roof on the old arena is adding time and money to the Seattle Center venue that seeks to host the NHL in 2021. Or so. 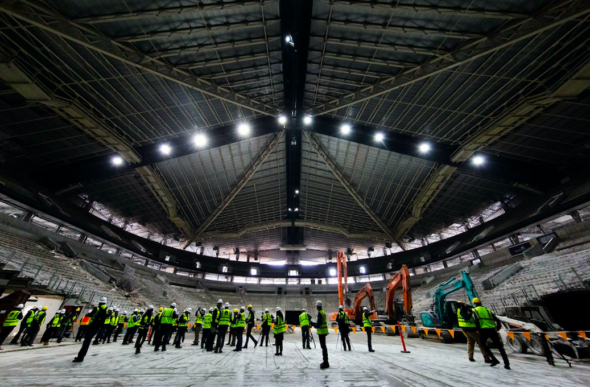 Amid the welter of metrics, backhoes and rubble that were part of a media tour of the rapidly shrinking KeyArena Thursday, one factoid stood out — 44 million pounds.

That’s the weight of KeyArena arena’s roof. Preserved as a historic civic landmark, it must remain while the new home of Seattle’s 2021 NHL expansion franchise is installed underneath.

That’s a heavy lift. More than the Seahawks lifted to pay Russell Wilson. More than Tiger Woods lifted to get his career back on a champion’s track. More than even the Mariners lifted to win 13 of their first 15 games in a scheduled zombie season.

Less metaphorically, one of the most memorable giant totems of my youth were the Saturn V rockets that the Apollo program used to send astronauts to the moon. Fully loaded with fuel, they weighed 6.5 million pounds.

So imagine seven of those bad boys on the Seattle Center grounds. Then plan to dig underneath them to create a grotto to hold 550 cars and an eight-bay loading dock. And make sure nothing falls over.

If you can get your imagination around that, it will help you deal with the second large number from the tour — $930 million. The latest revised cost estimate for the new arena, disclosed Thursday, is a tad up from the $650 million originally budgeted.

Add in the separate $80 million for the training facility at Northgate, and the arrival of the NHL in Seattle has crossed the $1 billion threshold.  But fear not — all of the money comes from private investors, unlike the ballpark and the football stadium, which combined for about an $800 million hit on the public exchequer.

Remember in 1999, when the Mariners ballpark came in at $517 million? Shock ran thick, deep and wide, but at least it had a cool new retractable roof. The arena will be recycling a 57-year-old topper that will be fixed in place.

At least that’s the plan. If this one retracts, that would be unfortunate.

“It’s been our biggest challenge,” said Oak View Group’s chief construction executive, Ken Johnsen, a veteran of many Seattle contruction projects, including the Mariners’ ballpark. “But we’ll get it done, and we’re confident this will be the best arena in the country.”

It definitely will be unique. Nearly all modern arenas are built from scratch, and none of them are required to preserve 44 million pounds of old stuff. The project even requires keeping the glass windows on the sides, even though they are 25-year-old single panes. Somehow, they were identified as part of the roof.

The roof itself won’t be raised. Temporary vertical steel supports will bear the weight as old walls are removed. But since more than 600,000 cubic yards of dirt must be excavated to make room for the garage and the loading bays, plus all of the back-of-the-house utilities and storage that are typical of concert venues, crews and equipment must work around the temporary posts.

“A lot of people said we couldn’t do that,” said Johnsen, who has helped oversee the upgrades for King Street Station, Pike Place Market, City Hall, Justice Center and the Central Waterfront project with its replacement seawall.

Apparently, if you throw enough money at a project, anything is possible. The degree of difficulty in keeping the roof in place while changing everything below it is probably the single most expensive engineering feat in the project.

It also helps mess with the timeline. Originally, the building was going to open for the NHL season that began in October 2020. But the NHL intervened and said spring of 2021 was more realistic. Now it looks as if June 2021 is more likely, which would displace the start of the WNBA Storm’s season.

“It’s definitely costing more than we thought, and taking a little bit longer,” said Tod Leiweke, CEO of NHL Hockey Partners. “But we’re here to say we’re ready to go. Is it worth it? It is. We’ve solved the Rubik’s cube. There were healthy contingencies built into the budget, should we discover something unforeseen. Some of the increase is because  costs here are well above other markets in terms of construction.

“But it’s evidence of ownership that’s totally committed. We didn’t dial back. We didn’t cut things out. Didn’t cut corners. It’s more money than we all thought. But we’ve all realized how epic this project is.”

A turning point was reached recently when OVG and chief contractor Mortensen agreed on a guaranteed maximum price. The GMP, an industry custom that typically sets the mark beyond which cost overruns become the responsibility of the contractor, was important enough that the city put a hold on demolition of the Key’s concrete bowl until the parties reached an agreement.

Now Leiweke can turn his attention toward schooling the public on how to describe the project.

“Many people think it’s a renovation; it’s not a renovation,” he said. “We are maintaining  the historic roof and creating a brand new building.”

For a billion bucks in private money, it’s the least we could do to call it the Saturn X.