From Wilson’s contract to videos and gifts, then to scoring well in the Frank Clark trade, Seahawks are on a roll. Now they need to draft a massive WR who runs a 4.33. 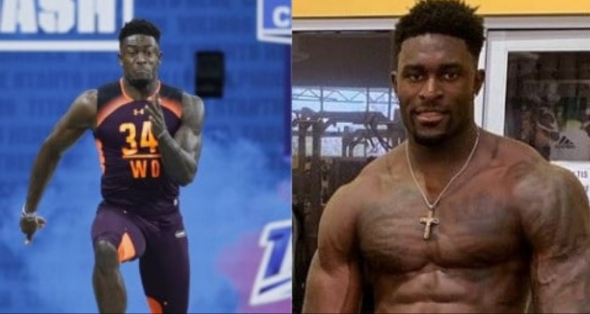 This, friends, is a wide receiver. D.K. Metcalf could be a Seahawk.

From the standpoint of grabbing the NFL’s attention, the Seahawks have been on a roll lately.

First there was the drama attendant to making Russell Wilson the highest paid player in NFL history. Then there was his tweeted announcement of the deal’s success from the pillow on his bed, wife all snuggly next to him, and three gold chains around his neck.

The world still hasn’t decided which element was ickier: The invasion of privacy or the threat of chain burns on Ciara. Conversely, the world was thrilled with the parody tweeted by teammates Tyler Lockett and D.J. Fluker.

There was the gifting by Wilson of Amazon stock worth $12,000 to each of 13 Seahawks linemen as a reward for protecting him last season (generously overlooking the fact that he was sacked a career-high 51 times). Not only was it a shrewd suck-up to Amazon, the chosen amount was a suck-up to fans (12s, get it? Wink/nudge).

Tuesday came the trade of DE Frank Clark to Kansas City for the Chiefs’ first-round pick (No. 29) and a second-round choice in 2020, which has generally been regarded as a pantsing of coach Andy Reid (OK, bad visual).

Suddenly, the Seahawks are thrust from the margins of the draft that starts Thursday into the spotlight, which is where they like to be. They have two picks in the first round (including their own at 21), and are objects of intense speculation as to whether they move down, move up, stay put, deal players again or just spontaneously combust.

These guys are one confetti-filled bucket of sideline “water” short of the Harlem Globetrotters.

So let’s not slow their roll.

Let’s speculate on a first-round position choice that isn’t the screamingly obvious pick of one of several defensive linemen who are prophesied to be the next Reggie White, or some such. Of course, Seattle needs to get an edge rusher to replace Clark; hell, they needed to get an edge rusher when he was still a Seahawk.

But with two picks, the have a chance, as per their custom, to go big and bold:

He’s the guy who stunned the NFL combine, but has a tantalizingly brief playing history. He fits the profile of risky oddness that Schneider and Carroll find irresistible.

The photo of him shirtless at a February workout in Phoenix — looking more like a topographic map of canyons, rivers and mountains — went viral and caused a sensation. But because of a broken foot and a neck injury in his three seasons at Mississippi, he played only 21 games and had 67 receptions. But when did get the ball, he averaged 18.2 yards, and turned 14 into touchdowns, then turned pro after his redshirt sophomore season.

Metcalf may not be widely known to fans but is no mystery to the NFL. Sports Illustrated did a big feature on Metcalf, the son of offensive lineman Terrence Metcalf, who played seven seasons with the Chicago Bears. Pro Football Focus recently declared him the No. 1 receiver in the class of 2019. Here’s what PFF wrote:

With Metcalf, there were legitimate excuses for why his numbers were so low. The biggest was a neck injury that limited him to only 201 pass routes in 2018. On a per route basis, he was actually more productive (Metcalf averaged 2.83 yards per route) than guys like N’Keal Harry (2.71), Preston Williams (2.64), Antoine Wesley (2.59) and Stanley Morgan Jr. (2.23) – all 1,000+ yard receivers this past season.

The other legitimate excuse was his usage. The way Ole Miss’s offense deployed a dynamic skill set like Metcalf was comically simplistic. He was left wide receiver – no slot, no motion. Defenses knew exactly where Metcalf would be every snap . . .  he ran go routes/fades/clear-outs snap after snap.”

Given that Carroll has had a mostly unrequited craving for a big receiver for all of his Seattle years, and that four off-season surgeries have left the football future of Doug Baldwin somewhat uncertain, the need for a guy like Metcalf is urgent.

But with some questions about his agility, as well as his brief resume, is the risk too high for Carroll? Oh hell no. At least, not when it comes to taking changes regarding physical stereotypes.

Carroll was asked Monday about one misfit last season on his roster, rookie DT Poona Ford, an undrafted free agent from Texas whose 5-11, 310-pound stubbiness was more than negated by arm length, strength and drive. He came out of nowhere to be an important part of the line rotation. He had his first NFL start Dec. 16 against the 49ers, and responded with six tackles, three for loss.

“How many 5-11 nose tackles are there in the NFL?” Carroll said. “Not very many guys in that profile. I don’t think you overthink it. He’s a rare combination. You had to get by the fact he would have been the smallest nose tackle in the league. It happens to quarterbacks too.

“His qualities were so unique. He was so good at getting off the football, he overcomes the stereotype of being a smaller guy.”

The analogy to Metcalf is imperfect. Although Ford was the Big 12 Conference’s defensive player of the year, he didn’t wow the combine, nor play a skill position.  And in football, small is bad, tall is good.

But he shares with Metcalf an unconventional profile for his position. Carroll loves such players because the Seahawks have a knack for playing to strengths and hiding weaknesses.

Hard to say whether Metcalf is worth either No. 1 pick, or be gone by then, or be available when the Seahawks pick in the third round. But when you’re on a roll, push in your chips.