As if the Cardinals weren’t annoying enough to the Seahawks, Arizona drafted Byron Murphy, the third former Huskies player into their defensive backfield. 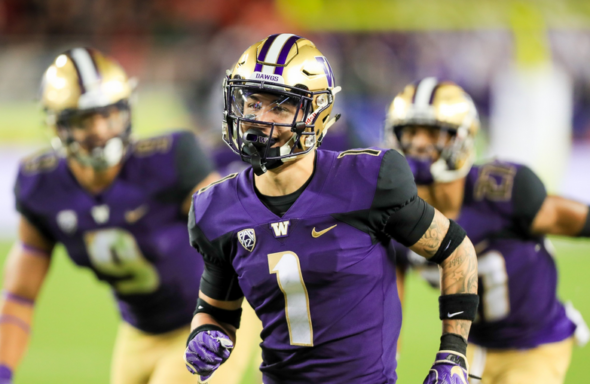 Byron Murphy is one of three former Huskies in the Arizona Cardinals secondary. / gohuskies.com

The Seahawks weren’t the only local football team that was made better over the weekend. The NFL draft also helped the Washington Huskies. Their loss of eight players to the pros — only Alabama (10) and Ohio State (nine) contributed more — was a net gain for the program. There’s nothing more impressive to top-tier recruits than for a school to be known as a pipeline to Pete Carroll, Bill Belichick,  and . . . well, the Arizona Cardinals.

That’s a remarkable purple splotch in the middle of all that red. But the suspicion is it won’t move the needle of sentiment among Seahawks fans. Among all Seahawks opponents, the Cards have become the most annoying.

In eight games between the division rivals over the past four seasons, the otherwise woebegone Zonas have won three (all at the Clink) and tied one. They nearly won both games in 2018, the Seahawks prevailing each time on last-second field goals by the now-retired Sebastian Janikowski.

For a team that hasn’t done squat regarding beating the rest of the league, these guys are somehow arrogant about their semi-hegemony in Seattle. In December 2017, ahead of the trip north, then-coach Bruce Arians famously popped his suspenders.

“We’ve got a big one next week, we know that’s our home field,” Arians said. “We’re going up there and kicking their asses.”

The newsboy-cap-wearing prophet foretold the future. The Cards somehow won 26-24 despite being directed by dubious Drew Stanton, perhaps the worst backup QB to win a game at the sometimes-formidable Clink.

Think about that for a minute. If the Cards can beat the Seahawks in Seattle with Stanton, what might they do with Heisman Trophy-winning QB Kyler Murray, the draft’s No. 1 pick? Which is another thing. They stole the Seahawks’ secret sauce — they hired a paradigm-busting short quarterback who’s a football sniper via ground or air.

And now they use the first pick in the second round — the second cornerback overall — to add another quality DB from the Seahawks’ home world.

Well, that’s not quite true.

The redshirt sophomore was a three-year hire by Huskies coach Chris Petersen. Murphy’s home world is the desert. He’s from Scottsdale. In 2015, he was the Arizonas high school player of the year.  The honor included getting his name stitched on the back of a Cardinals jersey.

NFL Draft Picks Over the Past 3 Seasons:

“Ever since then, I was like, man, I want to play for the Cardinals,” Murphy told Phoenix-area reporters Friday after his selection.  “That call . . . I kind of had it in the back of my mind I could be a Cardinal. This whole day I’ve been emotional, thinking about the whole being a part of the Birdgang.

During his time in Montlake, he had plenty of exposure to the Legion of Boom. But his dream was elsewhere. Cool.

From a UW perspective, Murphy’s success is another benchmark for Petersen’s increasing influence. He plucked Murphy from the back yards of Pac-12 competitors Arizona State and Arizona.

The eight players drafted are the most for Washington since 10 were taken in 1998, led by Olin Kreutz and Benji Olson. The 18 draftees over the past three seasons leads the Pac-12.

The Huskies’ national profile seems to grow by the year under Petersen, which is critical if Washington, conference champion in two of the past three seasons, is to make the talent breakthrough to be more than kings of a weak region.

In the big-boy bowl losses to Alabama, Penn State and Ohio State, the gap was plain. But the NFL scouts seem to suggest the gap is closing. Installing three players from one school into a single pro secondary is largely coincidence, but nevertheless impressive.

If Murphy or Baker in the fall pull off a pick-six on Russell Wilson to decide a game at the Clink, the 12s will suggest that Seahawks GM John Schneider make plans — Seattle traffic being what it is — for a satellite campus in Montlake, from where eight defensive backs have found their way to the NFL since Petersen’s first year in 2013.