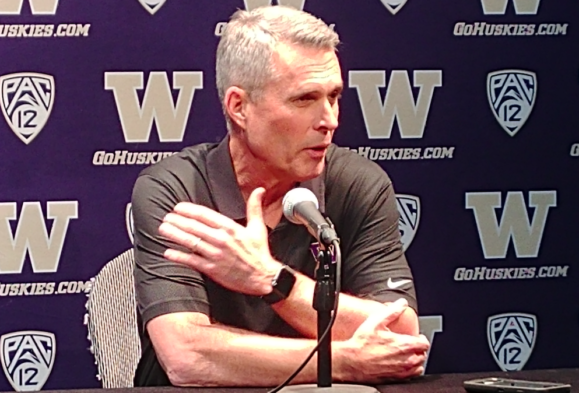 Huskies coach Chris Petersen signed up too many good QBs. But why should that hurt the players by mandating a sit-out? / Art Thiel, Sportspress Northwest

One of the more callous aspects of college football is playing out at Washington, where two highly regarded quarterbacks, redshirt freshmen Jacob Sirmon and Colson Yankoff, plan to leave the Huskies program to seek more playing time at other schools.

The Huskies are in good shape at the position for the fall. Junior Jacob Eason, who transferred from Georgia after starring at Lake Stevens High School, and sophomore Jake Haener of Danville, Calif., emerged from spring drills as the likely starter and backup, respectively. Another well-regarded prospect, incoming frosh Dylan Morris of Graham-Kapowsin High School, enrolled early and practiced in spring.

Not in such good shape are Sirmon, of Bothell High School, and Yankoff, of Hayden, Idaho, who have applied to enter the NCAA’s transfer portal that allows other schools to recruit them, according to the Seattle Times and 247 Sports.

Update: Jacob Sirmon Wednesday afternoon rescinded his decision to enter the transfer portal, according to the Seattle Times. Citing an anonymous source, the story said coach Chris Petersen offensive coordinator Bush Hamdan pleaded with the quarterback to stay. Monday, Sirmon’s father, David, confirmed to the Times his son was leaving, but Wednesday the younger Sirmon obliquely confirmed he would remain by tweeting a Bible verse that said in part: “‘For I know the plans I have for you,” declares the Lord, ‘that plans to prosper you and not to harm you.'”

No word from Yankoff yet. But the points in the column about transfers and the one-year sit-out rule remain valid regardless of Sirmon’s reversal.

Since each saw little future playing time at Montlake, given Eason’s skills, each seeks more action at another program, but are obliged by NCAA rules to sit out a season, as Eason did when he lost the starting job at Georgia despite playing well as a freshman starter. Sirmon and Yankoff did not play in 2018, so will have four years of eligibility wherever they end up.

With five non-senior QBs on the UW roster, the decisions by Sirmon and Yankoff to leave were not unexpected. What could have been expected was that Petersen and his staff manage the recruiting class more adroitly to avoid the awkwardness.

For whatever it’s worth, both were ranked among the top 100 QBs in their recruiting class. ESPN reported that the last team to take two from the same top-100 list in a single year was Florida in 2007. So this episode is rare.

When programs offer more scholarships than slots available, risk is automatic for both parties. Commitments can be rescinded by schools, and players can de-commit. However awkward, it is accepted practice.

The Huskies are more careful than most. For example, they offered 92 players for the latest class of 22 scholarships, when a program such as Tennessee scatter-shoots more than 400 across the country. Programs see scholarship offers and players as commodities, using volume as insurance against coming up empty at one or more positions. It works until too many players say yes.

The Huskies were caught over-offering the QB position, always the hardest to fill properly, and now must endure deserved criticism for having not just one quality player but two opt to leave. Simultaneously.

Fans concerned only with the won-loss record won’t care. People who care about athletes’ welfare — say, parents — will see this episode as a reason to be skeptical about UW recruiting practices. The standard coaching retort of, “We’re playing the recruiting game by the same rules as everyone else,” doesn’t inspire confidence when it’s your kid kicked to the curb for a year.

As a partial remedy for the unfairness to players, the reform-resistant NCAA last year gave in to pressure and implemented a transfer-portal mechanism for athletes in all sports that eliminates need for permission from a coach for a transfer, and keeps coaches from blocking transfers to certain schools, such as a rival. The player need only apply to transfer.

But the one-year sit-out still remains. Or at least it does until a parent hires a lawyer to apply for a waiver for the sit-out rule because of what the NCAA calls a “specific, extraordinary circumstance.”

Since the vague phrase is not further defined, a pop-up, niche-law industry is developing to define it in order to obtain immediate eligibility for players such as Sirmon and Yankoff, who are bumped largely by reasons beyond their control.

The waiver-appeal process is working — to an extent likely unanticipated. The Associated Press reported in January that since the new transfer rules were enacted, 79 percent of waiver appeals were granted. The number was 77 percent in women’s basketball and 60 percent in men’s basketball.

Dennis Dodd of CBSSports.com in February wrote about a new culture that is developing about team building, pointing out that Nevada’s men’s basketball team had an all-transfer starting five — and that was pre-portal. Among all Division I basketball players who enter directly out of high school, 40 percent transfer by the end of their sophomore years.

The advent of the portal represents a step toward an idea long overdue in college sports: A kind of (unpaid) free agency. Based on the results so far, the sit-out rule has been torn apart by so many grants of waivers that it is becoming largely irrelevant.

“We’re all a farm league,” Pittsburgh football coach Pat Narduzzi told Dodd. “Everybody is kind of picking and choosing (players) from the portal.

“Now everything gets approved. The player says, ‘They changed the uniform. I don’t like the color.’ The NCAA says, ‘You’re right. That’s a nasty-looking color. You can transfer.'”

Narduzzi’s sarcastic mockery conveys his disdain. So what? No other college students encounter a penalty for transferring. No college coach has to sit out after taking a new job. And graduation rates for transfers is 71 percent, so please don’t make a case that the sit-out helps avoid disruption of a player’s academic progress.

The transfer portal undoubtedly makes tougher the jobs of Marduzzi and colleagues. Again, so what? They are handsomely compensated to adjust to a changing landscape. The players are not handsomely compensated. The least colleges can do is treat offered players more fairly in the multi-billion-dollar market for their (unpaid) services.

Sirmon and Yankoff should have the right to move on and play immediately. They shouldn’t have to go through lawyers who must explain to an NCAA appeals committee that purple clashes with their clients’ eye colors and wardrobes.

Huskies fans won’t care about the welfare of Sirmon and Yankoff because they’re no longer suiting up. But the athletics department should care.

Since Washington’s recruiting helped deliver this awkwardness, the least the program can do is pick up the legal fees and help their former star recruits avoid further damage to their football careers.

In light of the double-QB transfer, the school might use the embarrassing spotlight to do a service by calling publicly for the NCAA to repeal the one-year sit-out. It would be an advocacy of student rights that might make Washington look progressive, instead how it looks at the moment.