The Mariners brought back Ichiro to the clubhouse, giving him an instructor’s job. The club also sent down slumping CF Mallex Smith and called up Braden Bishop from Tacoma. 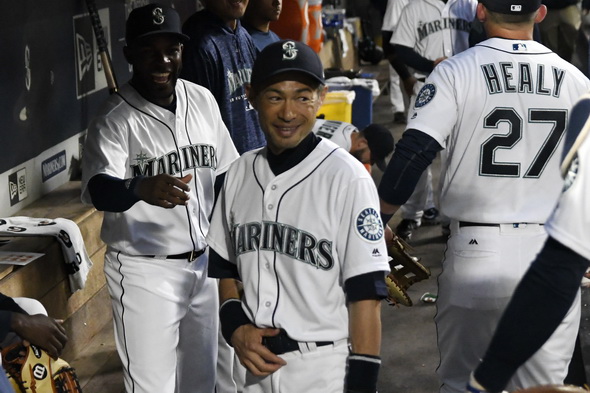 He’s returning to the club as an instructor for the MLB and AAA Tacoma teams, focusing on what he did best in a likely Hall of Fame career — fielding, baserunning and, in conjunction with the hitting coaches, batting.

He keeps his title the Mariners created for him a year ago, special assistant to the chairman, but will report to general manager Jerry Dipoto.

A press release said he will be at the majority of Mariners home contests, working with players pre-game. Over the years, Ichiro rarely expressed a desire to coach and/or manage. Then again, he was never 45 before.

“He’s first coach I’ve ever had come into a coaches meeting with batters gloves on,” Mariners manager Scott Servais told reporters ahead of the Mariners 7:10 p.m. game with the Chicago Cubs. “It didn’t really surprise me that much. I knew he was coming in today and invited him to come into the meetings.

“I want to give him as much exposure as I possibly can to what goes on kind of behind the scenes in terms preparation for a series, dealing with players, the conversations that go on.”

“I think his role and how much impact is kind of evolving,” Servais said. “We’ll wait and see where his niche is and where he gravitates toward. I think you’ll see him in the batting cage a lot because it’s his comfort zone. I look forward to having him around. He’s an insightful person. He certainly knows a lot about our team.

“But it’s different when you are sitting in here and we are talking about players and how to get them better.”

Ichiro retired March 21 after two games in Tokyo against the Oakland A’s that opened the MLB regular season. He was given an uproarious farewell by two sellout crowds at the Tokyo Dome, finally using the “R” word in a 90-minute post-game session with Japanese media.

Ichiro had hoped to continue playing, but was hitless in Tokyo and nearly so in spring training. A year ago, he was brought back to the Mariners to start the season because of a temporary shortage of MLB outfielders.

But after nine singles in 44 at-bats (.205 average), and struggling to track some fly balls, the Mariners created a position that left him off the roster but left him in uniform pre-game. He could not join the team in the dugout during games, often spending hours in the indoor batting cage, hoping to recover the reflexes that made him one of the game’s great hitters.

In a serious downward spiral, CF Mallex Smith Tuesday was sent down to AAA Tacoma and replaced by Braden Bishop, who in 21 games with the Rainiers hit .267 with three home runs, 13 RBIs, 12 walks and a .356 on-base percentage.

Bishop, 25, was on the opening day roster before being sent down March 23. The native of Woodland, CA., was a third-round pick in the 2015 draft out of the University of Washington.

Smith, 26 next month, is hitting .165 with 11 walks and eight stolen bases in 27 games. He dropped a pair of catchable balls in back-to-back losses to the Rangers over the weekend. The Mariners have the most errors in MLB, 37, leading to 31 unearned runs.