The times when Mariners could catch and throw

It’s good to know the Mariners have led MLB in fielding four times, because this season’s defenders may wipe out a baseball fan’s memory of anything good and dignified. 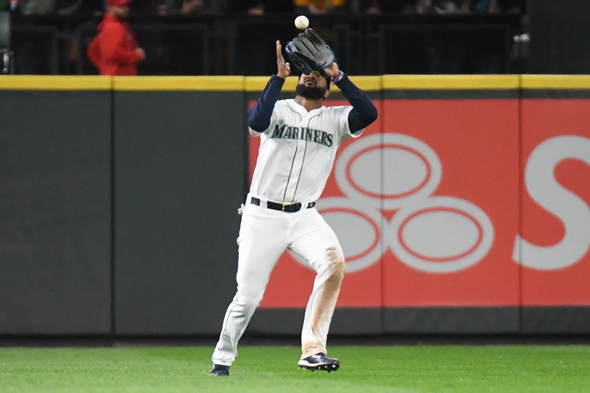 The Seattle Mariners made the fewest errors in the major leagues in four seasons: 2005, 2003, 2001 and 1993. They made just 65 errors in that 2003 season, back when they had great outfielders Ichiro and Mike Cameron, plus C Dan Wilson, 1B John Olerud and 2B Brett Boone, the five of whom made just 17 errors combined.

Not that the Mariners have much chance to make the fewest errors in the majors this season. And by no means just 65 errors. After all, they currently lead MLB with 38 errors after 33 games, which is 10 more than the second-place White Sox and 29 more than the Brewers, the league’s cleanest fielders.

Not only that, two players have each made three errors in one inning this season! Rookie Dylan Moore did so at third base in the ninth inning of a game against the Red Sox while SS Tim Beckham made three in the first inning against the White Sox. They are two of just seven players to have done so in the past decade.

Beckham also has made a team-high 11 errors in 30 games (he made 19 in 89 last year with the Orioles). He clearly has not been fielding as well as former Mariners shortstop Omar Vizquel, who made only seven errors in 1992 and also made his famed bare-handed play that saved Chris Bosio’s no-hitter in 1993.

CF Mallex Smith also dropped two routine fly balls in back-to-back games against the Rangers the past weekend. Not that Smith was the only one to make errors in those games. The Mariners made three in the 15-1 loss Saturday, then four in Sunday’s 14-1 debacle.

Wednesday, LF Domingo Santana dropped a fairly easy fly against the Cubs that led to three unearned runs in a six-run second inning and 11-0 loss. It was his sixth of the season, having shifted from right field to left field for the first time in his career.

“When we’ve made errors, we haven’t just limited the damage to one run,’’ Servais said Wednesday. “It’s turned into a big crooked number, and it’s been tough for us to overcome.”

The Mariners have fielded so badly that an American League team scout told the Seattle Times’ Ryan Divish that it was what he expected from the Mariners: “I thought it might be one of the worst defensive teams I’ve ever seen in the big leagues.”

After a great 13-2 start, the Mariners have gone 5-13 as they begin Friday a tough, 10-game road trip with three in Cleveland, four against the Yankees and and three in Boston.

“We’ve had stretches where we’ve played very poor defense, and we’ve had stretches where we’ll play six, seven games and we’re making all the plays and we roll,’’ Servais said last weekend. ” . . . When you make a pitch and you think you’ve got an out and it doesn’t happen, it’s just very deflating. We’ve seen that. When we’ve made an error, they’ve tacked on runs right behind it.”

Errors have declined considerably over the course of MLB history due to gloves getting better, as well as players simply getting better. In the early 1900s, teams averaged close to two errors a game. In 1908, New York’s Neal Ball made 81 errors just by himself – roughly one every two games — while his team made 339 that same season. 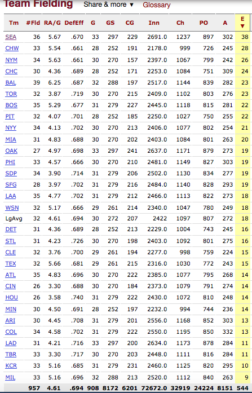 Improved equipment by 1939 helped drop the league average to less than one error a game. The decline continued slightly over the following decades. With defensive shifts and many more strikeouts these days, team errors dropped to an average of just 0.59 per game last year. In 2013, the Orioles made only 53 errors – less than one every three games — while the team high in 2014 was just 109.

So with the way errors have gone down, why is it that the Mariners have been making so many this season?

“I don’t have the reason for it,’’ Servais said. “I’m just focused on our team and what we need to do to get better — and where our errors are coming from. About 70 percent of the errors made in the major leagues are made from throwing, not from catching. Why is that? Because they’re in a hurry, the internal clock isn’t that good, understanding the speed of the runners, the game situation. A lot of (the increase) is related to throwing.

“You can go out and take a million ground balls in practice but it’s nothing like being in the game where the runner is busting it down the line. You have to have that internal clock in understanding what it takes to get the guy out.’’

Servais says that the players work hard on fielding during pre-game practice but some of the current players simply are not as good defensively as Ken Griffey Jr., Vizquel, Ichiro or Cameron. With veteran 3B Kyle Seager missing the first two months due to injury, his replacements clearly are not as good. In addition to those three errors by Moore, Ryon Healy, normally a first baseman, has made five errors in 31 games at third base.

“It’s been tough for us to overcome,’’ Servais said.

Seager is expected to be back in action this month, which should help since he is a former Gold Glove winner who made eight errors in 157 games in 2014, as many as Healy and Moore already made in 37 games.

There also is Gold Glove-winning 2B Dee Gordon, who doesn’t have to play in the outfield this season. The Mariners also called up rookie CF Braden Bishop, a very good fielding outfielder (and former Washington Huskies player) to replace Smith.

Adding better fielders will be an upgrade. But they have no shot to match the great glove teams in the early 2000s.