Knowing the post-Maria problems of his native Puerto Rico, manager Alex Cora will skip the White House party for the Red Sox, who now have planes going in different directions. 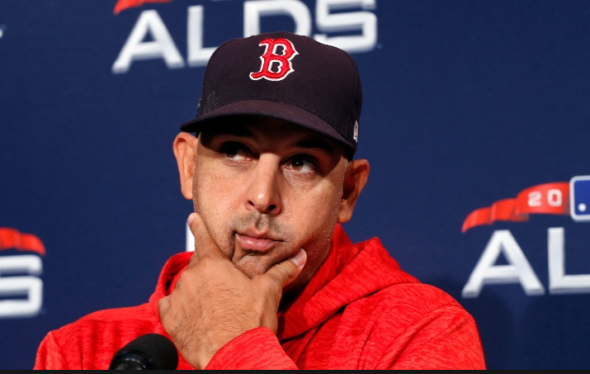 Compared to Hurricane Maria that slammed his native Puerto Rico in 2017, any metaphorical whirlwind caused by Alex Cora’s decision to shun the celebratory trip to White House Thursday for his defending World Series champion Red Sox is a trifle.

But the Boston manager undoubtedly stirred the sports/politics pot with his decision after a game in Chicago Sunday. He said he will join perhaps as many as 11 of his players in skipping the traditional celebration offered sports champions by the White House — and President Trump’s new tradition of offering fast food for the meal.

Red Sox management made clear the trip was optional for all parties, including executives and staff. Given his previous criticism of the federal government’s poor response to the category 4 storm, a point buttressed by a study released in March using public data, Cora’s decision wasn’t a surprise.

He released a statement to Puerto Rican outlet El Neuvo Dia that said in part:

Even though the United States Government has helped, there’s still a long road ahead and that is OUR reality. I’ve used my voice on many occasions so that Puerto Ricans are not forgotten and my absence (from the White House) is no different. As such, at this moment, I don’t feel comfortable celebrating in the White House.

The 17-18 Red Sox — who’ve won 11 of their past 16 as they recover from a terrible start begun by losing three of four in Seattle in March — have an off-day Thursday before hosting the Mariners for three games starting Friday. The team is chartering two planes after a series in Baltimore, one going to Boston and one going to Washington, D.C.

So far, American League MVP Mookie Betts and teammates Xander Bogearts, Jackie Bradley Jr., Rafael Devers, David Price, Christian Vazquez and Hector Velasquez, among others, have said they will join Cora on the Boston flight. A number of others have said they will go to D.C.

If there is a more accurate image manifesting in sports of the national divide, I haven’t seen it. One team, two planes. Is Cora concerned about a backlash?

“No, because there was going to be a reaction anyway,” he said, responding to a reporter’s question in Chicago. That is true.

If Cora participates in the ceremony, he would seem to turn his back on his previous criticisms of the poor federal response to a disaster that claimed more than 3,000 lives and still hampers many today. If he declines, he alienates the Trump fans in Red Sox Nation and invites presidential criticism.

It didn’t take long. Trump fired back in a series of tweets Monday morning, including this:

“Puerto Rico has been given more money by Congress for Hurricane Disaster Relief, 91 Billion Dollars, than any State in the history of the U.S. As an example, Florida got $12 Billion & Texas $39 Billion for their monster hurricanes. Now the Democrats are saying NO Relief to Alabama, Iowa, Nebraska, Georgia, South Carolina, North Carolina and others unless much more money is given to Puerto Rico.”

The claim is misleading at best, as this Washington Post story explains here.

Aside from the merits of the claims, the exchange is an example of the way Trump exploits sports to instill national discord, confusion and alienation. Many sports figures have to decide whether the White House champions custom is merely a ceremony or a tacit endorsement of his administration, and many fans are caught in the vortex.

Since the goal is controversy and conflict, the fact that a tweet can provoke such toxicity is all that matters to the perpetrator, not which side is right.

Trump believes the world responds only to what is seen on TV and his words. Agitating in sports, one of the few kinds of programming that is still appointment TV for most of the U.S., means he can reach a part of a larger audience that seeks to tune out politics.

His tweet Monday about the controversial outcome of the Kentucky Derby was a classic example. Regardless of whether you think Maximum Security fouled, per the rules of racing, Trump scornfully spun the revised victory of Country House via disqualification as a win for “political correctness,” one of his favorite cultural targets.

Beyond the fact that he spelled it “Kentuky,” political correctness had nothing to do with following the sport’s rules. Being fair, accurate or even rational was never the point. Confusion about rules and customs helps manipulate his base.

Cora, younger brother of Joey Cora, the Mariners’ popular second baseman from 1995-98, is willing to endure the blowback because his conviction prevails over the tempest. He knows his sports credibility counts for something.

A career .243-hitting infielder over 14 MLB seasons for six teams, he won World Series rings as a Red Sox player (2007) as well as last season as manager, and has a third as a coach from the 2017 title won by the Astros. He’s one of five in MLB history to win a World Series in his rookie year as a manager, and the only one to win 119 games,  including postseason. The Red Sox in October beat the Yankees in four games, the Astros in five and the Dodgers in five to win their fourth title in 15 years.

As a condition of his 2017 hire from Houston by the Red Sox, he asked for and received a plane-load of supplies in the aftermath of Maria for Puerto Rico, where he lives with his family in the off-season and continues his humanitarian work. He played for Puerto Rico in the 2006 and 2009 World Baseball Classic.

“Puerto Rico is very important to me,” Cora said. ” . . .Unfortunately, we are still struggling, still fighting. Some people still lack basic necessities, others remain without electricity and many homes and schools are in pretty bad shape almost a year and a half after Hurricane María struck.”

Besides the U.S. territory of Puerto Rico, the Red Sox’s 40-man roster has players from five nations. The Mariners have four nations on their 40-man. By attacking individuals, teams, owners and rules in nearly all major sports, Trump is attempting to divide the most culturally and ethnically diverse industry in the nation, including the top, highest-paid individuals. Yet it’s a world in which he wanted desperately to be a part. He was rejected by the NFL in a 1988 bid for the New England Patriots, and outbid in 2014 for the Buffalo Bills.

In the bigger picture of scandal and chaos in his administration, Trump’s tweeted hypocrises and mewlings about sports are a small sidebar. But his policies have real-world negative impacts on sports teams and people. Cora doesn’t see a party there.

The bet here is that Cora not only will find a way to keep two planes of Red Sox on course this season, his courage and activism will be a beacon in the storm.