Doug Baldwin failed his physical exam, as did Kam Chancellor. So the Seahawks released Thursday two of the greatest figures in their run to consecutive Super Bowls. 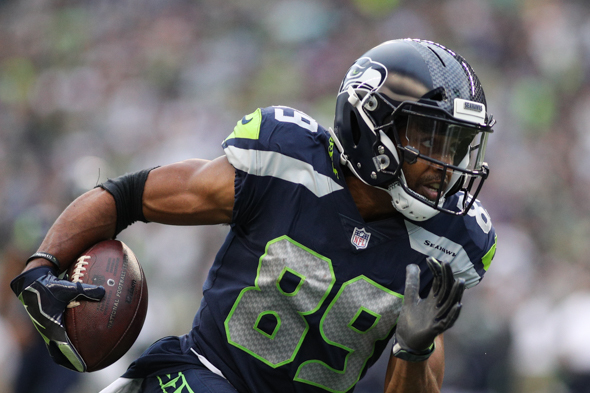 WR Doug Baldwin this off-season had hernia surgery, as well as operations on a knee and a shoulder . / Drew McKenzie, Sportspress Northwest

Two stalwarts of the Seahawks era at the NFL pinnacle officially became ex-Seahawks Thursday. WR Doug Baldwin, 30, and SS Kam Chancellor, 31, failed physical exams and were released. Chancellor’s cut was a formality after not playing last season following a neck injury; Baldwin’s multiple surgeries after his most injury-riddled season made him unable to return.

“The Seahawks have made the difficult decision to terminate/failed physical Doug Baldwin and Kam Chancellor,” general manager John Schneider said in a release. “These are two of the most iconic players in franchise history and both were instrumental in establishing our championship culture, great examples of competitiveness and leadership on the field and in the community.

“These legendary players will always be a part of our Seahawks family.”

The two were among the best examples of players who overcame a low regard in the draft and flourished in coach Pete Carroll’s plan that awarded playing time on the basis of competition instead of draft round, school pedigree or the club’s financial investment.

Chancellor was a fifth-rounder from Virginia Tech in the 2010 draft. A year later, Baldwin from Stanford, went unselected, and signed as a free agent with Seattle. Baldwin parlayed the disrespect into a remarkable rookie year in which he led the Seahawks in receptions, receiving yards and receiving touchdowns.

In 2015, Baldwin set the franchise record for touchdown catches in a season with 14. A year later, he matched the team record for receptions in a season with 94. A two-time Pro-Bowler in eight seasons, Baldwin’s 49 career receiving TDs are second in club history  to Hall of Famer Steve Largent, and his 493 catches and receiving 6,563 yards rank third behind Largent and Brian Blades.

After a rookie season as a backup, Chancellor became a starter in 2011 and, with FS Earl Thomas, formed one of the greatest safety tandems in NFL history. By 2017, Chancellor was voted No. 75 in NFL.com’s list of top 100 active players. But in November, not long after he received a third contract from the Seahawks, a three-year extension worth up to $36 million with $25 million guaranteed, Chancellor injured his neck against Arizona and never played again.

Via social media,  he announced his retirement July 1, later disclosing he had spinal stenosis and bone spurs in his neck.

Chancellor’s guarantee means the Seahawks will pay him $5.2 million in 2019 after paying $6.8 million in 2018. Had he chosen to retire instead of remaining on injured reserve, he potentially would have lost that money.

Baldwin had played two of the four years in his contract extension signed in 2016, but had no more money guaranteed. He was scheduled to make $9.25 million this year and $10.25 million in 2020. But by being cut instead of retiring, he didn’t have to return about $7 million in bonus money, according to the Seattle Times.

According to overthecap.com, Seattle will save over the next two years against the cap $6.8 million and $11 million on Baldwin, and for Chancellor, $2.3 million and $12 million.

After his best game of the season, seven catches for 126 yards in a 38-31 win over Kansas City, Baldwin, who had not missed a game since 2012, admitted his body was beaten down.

“This year has been absolutely hell,” he said. “I’ve been  . . . oh,my goodness. We don’t have enough time for that. It’s been hell. But I’m so grateful to be healthy enough to be on the field with my teammates to celebrate victories and just enjoying playing football again, just like a kid.”

Only three players remain in Seattle from the Seahawks’ most recent Super Bowl teams — QB Russell Wilson and LBs Bobby Wagner and K.J. Wright. That’s why players say the NFL acronym stands for Not For Long.