Hernandez out 4 to 6 weeks with strained lat

Felix Hernandez has a strained lat, which will keep the one-time ace out for four to six weeks. He’s one of four pitchers on the injured list with muscle strains. 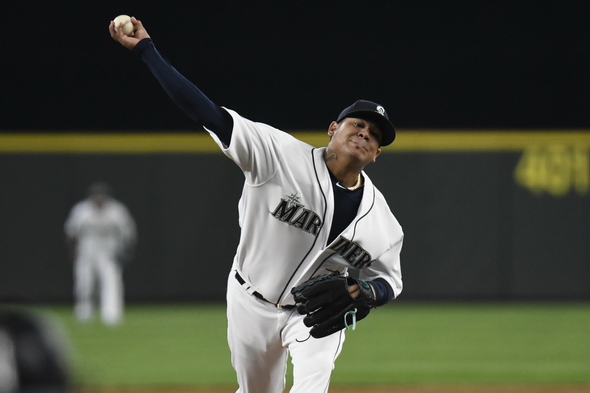 After some solid starts in his final year as a Mariner, Felix Hernandez is nearly at a full stop. The former ace, 1-4 with a 6.52 ERA and now the club’s fifth starter, has a grade-one (lowest-level) lat strain and will miss four to six weeks, manager Scott Servais said Tuesday.

It’s the same injury that in March shut down Hunter Strickland, the successor to Edwin Diaz as closer. Hunter has barely begun throwing.

“It’s not quite as severe as what Hunter Strickland had, but it’s disappointing for (Hernandez),” Servais said.

Saturday in Boston, Hernandez, 33, gave up seven earned runs in 2.1 innings, his worst outing of eighth the season. He said after the game there were no physical problems, but Sunday admitted to discomfort. The Mariners put him on the 10-day injured list ahead of the diagnosis.

Besides Hernandez and Strickland, the Mariners also have two other pitchers on the IL, No. 4 starter Wade LeBlanc (oblique) and reliever Gerson Bautista (pectoral). LeBlanc made a 59-pitch rehab start with AAA Tacoma in Las Vegas and may return this weekend for a series against Minnesota.

In the first game of his rehab assignment with the Rainiers Tuesday, 3B Kyle Seager (hand surgery) went 1 for 4 with a double and a walk. Seager is expected to return May 25, when he is eligible to come off the 60-day IL.