Despite the almost total loss of sight in one eye, Bob Schloredt led the Washington Huskies to Rose Bowl wins after the 1959 and 1960 seasons, and was a two-time MVP. 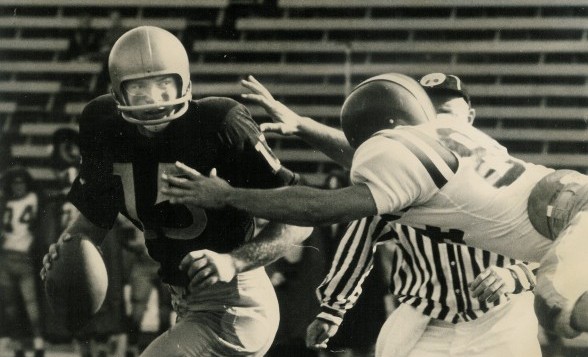 Bob Schloredt, the quarterback who led the University of Washington to Rose Bowl victories following the 1959 and 1960 seasons, helping transform West Coast football, has died at 79, according to his family via UW athletics.

He was the first player in history to win Most Valuable Player honors in two Rose Bowl games, sharing as a junior the honor with teammate George Fleming.

In addition to going 15-2 as a starter (he missed games as a senior due to a broken collar bone, from which he recovered prior to the Rose Bowl), he gained national fame due to being almost entirely blind in one eye due to a childhood accident. 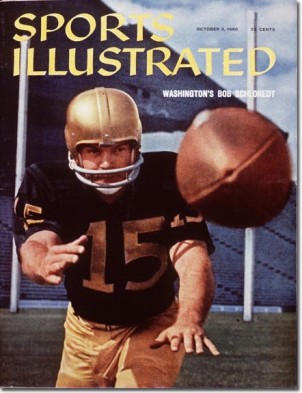 In October 1960, Bob Schloredt became the first Huskies football player to appear on the cover of Sports Illustrated.

As a junior in 1959, he earned first-team All-America honors from the Associated Press as a two-way player, leading the Huskies on defense with six interceptions.

In the win over No. 1 Minnesota on Jan. 2, 1961, which earned UW a share of the national championship, Schloredt threw for one touchdown and ran for the other.

Owens’ Rose Bowl teams received much of the credit for the rejuvenation of West Coast football. After Washington’s 1961 victory, West Coast schools won 13 of the next 20 Rose Bowls.

Following his UW career, Schloredt played for the BC Lions in the Canadian Football League before returning to Seattle, where he served as an assistant coach under Owens from 1963 to 1973.

Born in Deadwood, SD, in 1939, Schloredt graduated from Gresham High in Portland before coming to UW.