Jaden McDaniels, a 6-9 star forward from Federal Way, spurned Kentucky for Washington, where he will team with another top-shelf recruit, 6-9 Isaiah Stewart, in the fall. 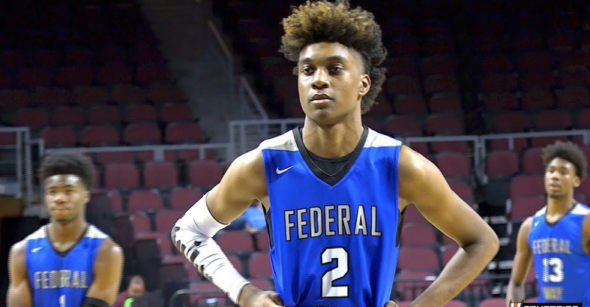 Huskies coach Mike Hopkins has taken his recruitment skills to the top tier of men’s college basketball. The announcement Wednesday of the signing of Jaden McDaniels, a 6-9, 185-pound forward from Federal Way High School and one of the nation’s premier prep players, to pair with another five-star recruit, 6-9, 245-pound forward Isaiah Stewart, signals a new frontier for UW hoops.

“Jaden is an elite player, tremendously athletic for his size and is going to be a great addition to our class,” Hopkins,  two-time Pac-12 Conference coach of the year, said in a statement. “He has an unbelievable work ethic and a great skill set for his position, as he can do it all.

“Getting an incredible player from our state is not only special, but he is a proven winner and has developed into not only the top player in the state, but one of the best in the nation. He is the perfect fit for the culture we are creating here as we continue to build the UW program.”

Washington and Kentucky were the finalists in the race for McDaniels, who delayed his decision well past the normal letter of intent deadlines. He had earlier considered San Diego State, where his brother, Jaylen, plays, and Texas. He is ranked as the N0. 8 player overall, and top power forward, by 247Sports.com.

Stewart was ranked No. 3 overall, and along with McDaniels, are projected as lottery picks in the 2020 NBA draft. Stewart is considered the highest-rated recruit to commit to Washington.

Last winter, McDaniels averaged 23 points and 10 rebounds to lead Federal Way to a 26-3 record and a third-place finish in the state 4A tournament. He was selected for USA Basketball’s U-18 team.

McDaniels is a uniquely talented forward who possesses a good deal of upside: At 6’10”, he moves and handles the ball like a wing, has natural scoring touch and is an underrated passer. He plays with a good level of toughness, and when his jump shot is falling, he can create matchup issues for defenses. On the flip side, McDaniels is extremely thin, which creates some limitations and occasionally causes him problems trying to impose his will. While the body type is more of a long-term concern—he will still be a big boost for Washington as a one-and-done player—he will need to find a greater level of consistency with his jump shot to maximize his impact. He’ll be one of the more intriguing players to follow going into the fall.

The Huskies already had a top-10 recruiting class, as judged by the national scouting services.

Five-star recruit and Kentucky transfer Quade Green, a 6-0 point guard from Philadelphia, who has been with the team since January 2018 sitting out due to transfer rules, begins play in January. The class includes RaeQuan Battle, a 6-5 shooting guard from Marysville Pilchuck, and 6-3 shooting guard Marcus Tsohonis of Portland’s Jefferson High, who is ranked No. 3 overall.

The Huskies have one returning starter, forward Hameir Wright, from last year’s 27-9 team that won the Pac-12 regular-season title and an opening-round game in the NCAA tourney. Matisse Thybulle, Noah Dickerson and David Crisp graduated, and sophomore Jaylen Nowell declared for the NBA draft, although it remains possible for him to return. Nahziah Carter, a 6-6 reserve guard last year, is a likely starter.

The Huskies head to Italy Aug.12 for 10 days in Rome and Florence that include four exhibition games against Italian Series A teams.