Who to root for in the championships of the NBA and NHL? The underdog story of the St. Louis Blues beats the same for the Toronto Raptors. Besides, Blue Jays fans suck. 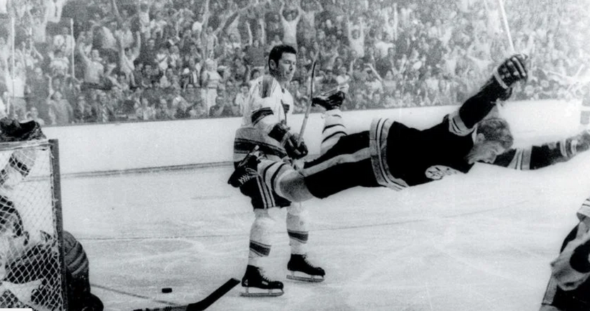 In one of the most famous photos in sports history, the Boston Bruins’ Bobby Orr goes airborne after scoring the Stanley Cup-winning goal in overtime against the St. Louis Blues in 1970. / Ray Lussier, Boston Record American

Knowing how the dwindling knot of Mariners fans are repulsed annually by the bellicose Canadians who commandeer T-ball Park for the annual series with the Blue Jays, this notion may be hard to take. But since the NBA Finals features the Toronto Raptors for the first time in their existence, they are automatic darlings of the North American pro sports spring.

Since their foes, the Golden State Warriors, are in the Finals for the fifth time in a row, their dominance has put them in the villain’s role, in the fashion of the NFL’s New England Patriots and MLB’s Yankees of yore. Difficult as it is to dislike the Warriors for both their personalities and remarkably savory ballplaying, cartoon roles must be assigned for nonaligned fans.  Otherwise, what is the point?

Then again, if the thought of offering support to a Canadian team makes your blood thicken to poutine-like viscosity, there is another choice this spring, especially in view of Seattle’s pending ascent into the National Hockey League.

The Stanley Cup Finals feature the St. Louis Blues, whose dreary past is sadder than the Raptors, and even more weird than the Mariners, who opened in 1977.  And like Seattle, St. Louis still bleeds from the open wound of a civic hijacking of a sports team. Its wound is fresher, the NFL Rams having absconded to Los Angeles after the 2016 season.

The Blues’ first year was 1967-68, same as the Sonics. But the Blues immediately made three consecutive Stanley Cups, because they were the best part of the freakiest spasm of expansion in pro sports history.

Under the guidance of a crafty young coach named Scotty Bowman — who would go on to win nine Stanley Cups and more than 2,100 games in a Hall of Fame career — the Blues won the first three West finals. Then they lost three Cup finals to the much superior Easterners by a combined 0-12 mark.

That dirty dozen still stands as the NHL’s winless record — at least until now. In the series opener at 5 p.m. Monday (NBC, CBUT), the Blues return to the finals against the Boston Bruins, who beat them 49 years earlier.

In that title-free half century, the Blues nevertheless had 338 playoff games, or about four regular seasons worth of postseasons. In avoiding abject futility, they also lost out on chances for premium draft picks who could have made a difference in gaining franchise renown.

However, that high draft pick seemed in hand as recently as Jan. 2, when the Blues had the Western Conference’s worst record. Not long after, Dan Wetzel of Yahoo! Sports pondered in a tweet whether the Blues were the most obscure franchise in pro sports:

Watching St Louis Blues tonight. Wondering if there is a more anonymous pro sports franchise. Just a few conference finals appearances since 1970, yet rarely so terrible they generate notice. Other contenders?

But for reasons not clearly understood by high priests, low bookies and hockey pundits, the Blues finished on a 30-10-2 run to tie for fourth in the West with 99 points. In the playoffs, they beat Winnipeg 4-2, Dallas 4-3 and San Jose 4-2. Now, they are upon the threshold of a frozen Valhalla.

It may well be that the seasonal turnaround was inspired by a mid-season change in the team’s post-game win song. Several players claim that the change to Gloria, the 1982 hit by Laura Branigan,  has been fundamental.

A surprising playoff team is always a better follow if it has a superstition, custom, music or saying that lacks in logic what it makes up for in absurdity.

So in a market that lacks for winter sports teams, as well as the absence of a team to hate (buh-bye, Oklahoma City), the Blues seem to check more boxes in Seattle than the Raptors.

Besides, the Raptors also have the distinction of having fired two significant figures from the Sonics tradition. Lenny Wilkens, coach of the Sonics title team, ran the Raptors from 2000-03 (113-133 record) before being ousted.

Dwayne Casey, a Sonics assistant from 1994 to 2005 and the man who kept George Karl from spontaneously combusting, was ousted even more senselessly a year ago.

Casey coached the Raptors from 2011 to 2018 (320-238), which included four Atlantic Division titles in five seasons, and three consecutive 50-win seasons. Because of the need for a “culture re-set,” whatever that means, Casey was fired by team president Masai Ujiri two days after winning the Michael H. Goldberg coach of the year award, handed out by the National Basketball Coaches Association.

Obviously, the controversial firing of Casey, as well as the hiring of star forward Kawhi Leonard for potentially just one year, seems have to worked out. But that doesn’t mean anyone in Seattle has to like it. It’s perfectly fine to carry the bitterness from the incursions of Blue Jays fans to stupid ends.

In fact, if you find yourself at T-ball for the Toronto series Aug. 23-25 and close enough to smell the Kokanee on his breath, ask the belligerent Blue Jays fan this question:

“Hey, my friendly mackinaw-wearing Canuck, what’s more impressive: The first NBA Finals in the Raptors’ 24 years, or the fact that a Canadian team hasn’t won the Stanley Cup in 25 years?”