The Raptors lost a howler of a game Monday to the Warriors, but still have two chances to win Canada’s first NBA title. If so, expect Oak View Group’s Tim Leiweke to take a bow. 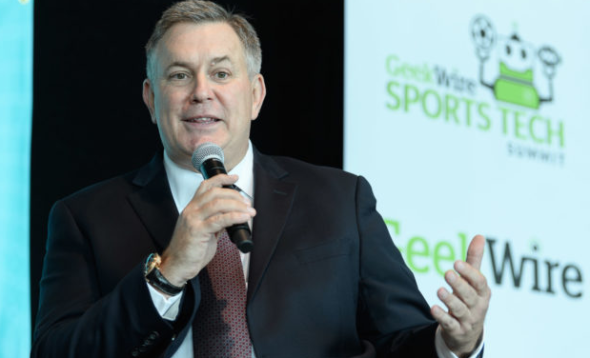 Oak View Group’s Tim Leiweke was the guy who hired Masai Ujiri, the Raptors’ president, who has made all the right moves. / Kevin Lisota, Geekwire

The NBA had itself some drama Monday night. The two-time defending champs, down 3-1, celebrate the return after 32 days of their star big man, who plays 14 brilliant minutes, only to go down with a more serious injury. Yet Golden State wins. By one. On the road.

The Toronto Raptors, feeling the weight of everyone from Hudson’s Bay to Whitehorse on their backs, slavering for a first championship, can’t shoot a lick, yet come from 14 down to six up inside the final four minutes. Then they ease ever so slightly, and lose. By one. At home.

I have no idea who will win the series, now that Kevin Durant’s Achilles tendon injury has changed the entire NBA just a little. But for the first time since the Sonics left Seattle in 2008, after Durant’s rookie year here, I’m interested.

Suddenly, and for a perverse reason, I would like to see an NBA champion from Canada, which hasn’t had a Stanley Cup winner in 25 years. I want a sports result as upside down as the U.S. federal government. I also want the NBA champs to skip the White House invite, and this time accept one from Parliament.

As long as you’re not a Mariners fan.

If you are a Mariners fan 1) blessings be upon your miserable self, and 2) the embrace is harder, because you retch involuntarily when the Toronto Blue Jays and their fans across Western Canada show up as a great blotch of poutine stains for the annual Seattle series to hector, mock and otherwise denigrate the pitiable, outnumbered locals.

It is a side of Canada that does not fit the mythology of our national neighbors. You remember the joke: Canada is the second-floor law office above a great party bar.

Well, Canada can do rowdy as well as any place, particularly now that global warming will give Saskatoon and Yellowknife some Palm Springs weather. But the party is not waiting for the thaw. It’s on now. Here’s hoping for Game 7 in Toronto Sunday.

Not since the Blue Jays in 1993 won a second consecutive World Series,  the same year the Montreal Canadiens beat the Los Angeles Kings 4-1 for the country’s most recent NHL title, has the Great White North been granted official sporting license to shimmy-dance in the faces of humbled Yanks.

Should it come to pass, a guy with new Seattle connections will rate a tip of the RCMP Mountie hat.

For two years and seven months, Tim Leiweke, the boss of the Oak View Group that’s making over KeyArena to host an NHL expansion franchise, was in charge of the NHL Maple Leafs, the Raptors and MLS’s Toronto FC.

In April 2013, he took over Maple Leaf Sports and Entertainment, an 88-year-old corporate colossus that owns all three teams —  none of which were doing squat — as well as the Argonauts of the Canadian Football League, and all of their venues.

Since then, Toronto FC twice reached the MLS Cup, splitting titles with the Seattle Sounders. The Leafs have made the playoffs in each of the past three seasons (40, 49 and 46 wins) after having been absent for 10 of the previous 11. And the Raptors, who won three playoff games in the previous 11 years, have been to six consecutive postseasons and are a win away from selling “We The North” T-shirts and hats in Chile, South Africa and New Zealand.

Leiweke also was the guy who made Drake the Raptors’ “global ambassador.” Can’t win ’em all.

Leiweke wasn’t in Toronto that long and can’t claim all the credit. But in his first year on the job, he hired Masai Ujiri to run the Raptors, Brendan Shanahan to do same for the Leafs and Tim Bezbatchenko as soccer boss. The latter left after winning the 2017 title, but Ujiri, Shanahan and several key players remain from his tenure.

A year ago, Ujiri made the hugely controversial trade of popular DeMar DeRozan to the San Antonio Spurs for Kawhi Leonard, who had one year left on his contract. Ujiri bet the house that Leonard, MVP of the 2014 NBA Finals, was the missing piece. Ujiri also fired head coach Dwayne Casey, the former Sonics assistant who had great success but fell short in the playoffs against LeBron James and the Cleveland Cavaliers.

Ujiri is a win away from massive vindication via instant results.

Canada’s Sportsnet interviewed Leiweke Friday, and he predictably gushed over the Raptors’ success.

“That’s probably what gives me the most pride, is that I helped steal and recruit Masai (from the Denver Nuggets, where he was 2013 executive of the year), and he’s turned out to be everything we imagined and more. And I think the impact he’s had not just on the franchise, but on the city and on the game of basketball, has been immense.”

Leiweke’s time in Toronto was hot and bright, and burned enough bridges that he announced in August 2014 he would be leaving. But he stayed until his successor was named in October 2015. A month later, he joined with music mogul and business partner Irving Azoff to form Oak View Group.

In Seattle, Leiweke for now is concentrating on arena-building, not team-building. He hired his brother, Tod, to head up franchise operations.  In a 2017 column in the Toronto Sun, Steve Simmons described Tim Leiweke’s Toronto tenure in terms a little familiar to people who’ve encountered him in Seattle.

This bull in a china shop — knocking things down, tripping all over his words, battling with his bosses, making wild and entertaining proclamations — let anyone who would listen know that the culture of losing within Maple Leaf Sports and Entertainment was about to end.

Leiweke played the part of runaway train, bowling over those in his way, not caring much for whatever residual damage was left at the side of the road.

Leiweke also helped make Raptors so popular that there are 37 Jurassic Parks in Canadian cities, public squares where Raptors telecasts are put up on giant projection screens, emulating the thousands outside Scotiabank Arena for playoff games. Impressive what happens when an entire nation gets behind a single team. Ask Mariners fans.

“It’s great that the U.S. media and the U.S. basketball fans are beginning to figure out what is going on in Toronto,” Leiweke said.  “I think it’s one of the great sports stories ever written. And good for that city. They deserve it.”

Speaking of “great sports story ever written,” Leiweke may be in no position to enjoy a potential Toronto win in Game 6 of the NBA Finals Thursday night in Oakland. Twenty-four hours earlier in Boston, Game 7 of the Stanley Cup finals will decide matters between the Bruins and the St. Louis Blues.

It happens that the Leiwekes were born and raised in St. Louis. The Blues, the boys’ first sports love, are going for their first championship. If they win, Tim Leiweke may spontaneously combust.