Title tTriumphs this week by bedraggled franchises in St. Louis and Toronto reinforce the notion that decades of despair do not last unto infinity. There’s hope for the Mariners. 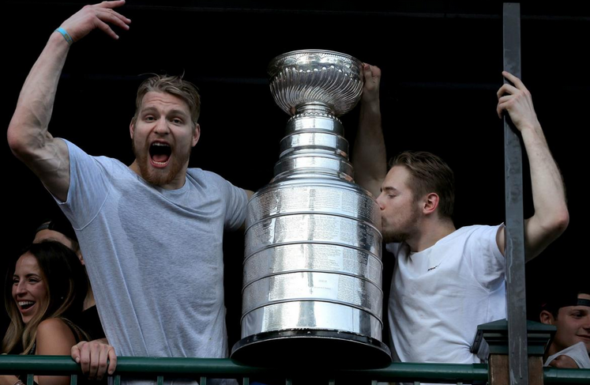 Mariners fans alert: Sports-franchise enfeeblement is not a permanent condition.

Probably you knew that. But when the local nine leads the solar system in errors, strikeouts and double-digit losses, sometimes it’s important to hear the reminder over the Benny Hill-theme music playing on an endless loop in your minds.

The celebrations this week of champions in the NHL and the NBA had a commonality — both are first-time champions in cities that had longtime waits. The successes offer a glimmer that relieves a bit of the baseball bleakness. And the development also speaks a bit to the NHL future here.

The feats are noteworthy locally because the Mariners are on their 43rd year without a World Series appearance, much less a win. But in the grand sweep of pro sports franchises, renegade malaise is not uncommon.

It does, however, inspire gallows humor, the latest being a question:

Who wins their first championship first — the Mariners or the NHL franchise that is two years from birth?

The question gains a little legitimacy given the NHL’s recent ability to surface orphans, destitutes and ne’er-do-wells. The abrupt, unforeseen Stanley Cup win by the Blues — in early January, they were the worst team by record in the West — follows the one by the success of another longtime street urchin. The Washington Capitals in 2018 won their first title in 45 years.

And a year ago, the NHL’s Las Vegas Golden Knights were the darlings of the sports universe. Their remarkable success — the initial first-year expansion team to reach the top nearly since Lewis and Clark won the walk to the mouth of the Columbia River — suggests that its sister expansionists in Seattle need not flail for decades.

But both winter sports leagues have dubious dollops of teams without championships.

Cup triumphs by Washington and St. Louis cut to 11 the number of active NHL franchises that have not won titles, at least since the 1927 start of the Cup’s designation as an NHL-only award.

Seven have played in the finals without winning: Vancouver Canucks (three times), Buffalo Sabres (twice), and one appearance each for Florida Panthers, Nashville Predators, Ottawa Senators (since 1992 expansion), San Jose Sharks and the Knights. The Canucks and Sabres, expansion sisters in 1970-71, have been at it the longest.

Four have yet to make the finals: Columbus, Atlanta/Winnipeg, Minnesota and Arizona.

Five have been in the finals: Twice for Phoenix, New Orleans/Utah, New Jersey/Brooklyn and Orlando, and once each for Indiana. Six have yet to play in the finals: Buffalo/San Diego/Los Angeles Clippers, Charlotte, Denver, New Orleans Hornets/Pelicans, Vancouver/Memphis Grizzlies and Minnesota.

In the NFL, 13 active franchises have not won a title since the 1967 start of the Super Bowl era.

Nine have been to the title game and lost: Four each for Minnesota and Buffalo; twice for Cincinnati, Carolina and Atlanta; and once for the SD/LA Chargers, Houston/Tennessee Titans, Cleveland (pre-1999) and St. Louis/Arizona Cardinals. Four have never been: Cleveland (post-1999), Detroit, Jacksonville and Houston Texans.

MLB, with many more seasons, has a mere two without a World Series appearance, the Montreal/Washington Nationals, begun in 1969, joining the Mariners (1977 start) in a duopoly of futility.

So a glance beyond baseball reveals lots of places with similar non-competitive droughts. Our friends in Phoenix show up empty on both winter sports lists. The sun-kissed sports mediocrity was disrupted with a lone World Series title by the 2001 Diamondbacks behind ex-Mariner Randy Johnson. The football Cardinals made the Super Bowl in 2008, losing to the Steelers.

In the NHL, the two most storied franchises, Montreal and Toronto, did a lot of winning when the league was six teams (pre-1968), the Canadiens taking 24 titles and the Maple Leafs 13 since 1915. But the Leafs last won in 1967 and the Canadiens not since 1993. The New York Islanders won five consecutive titles through 1984, and haven’t been to the Cup finals since.

The foregoing represents a lot of data points featuring emptiness, but the compilation seemed worthwhile as thousands poured into the streets in St. Louis and Toronto to celebrate a novel thing that that only the most resolute local imaginations could conjure: A championship after decades of denial.

Some will try to discount the Raptors’ victory because of injuries to Warriors stars Kevin Durant and Klay Thompson. Wrong. Attrition is always a part of every sports season. It’s a shame for all when it happens, but should never diminish the accomplishments of the winners.

Sonics fans will forever lament the back injury to Nate McMillan that compromised him in the 1996 Finals against the Bulls. The same can be said about Seahawks fans for the injuries to Richard Sherman, Kam Chancellor and Cliff Avril in the Phoenix Super Bowl against New England. The what-if game is always irresistible after a loss, but also irrelevant in judging the worthiness of the winner.

Cementing the cred of both teams as legitimate champs, the Raptors and Blues each won three road games. That feat by itself deserves its own civic parade.

Regarding the Seattle question of who wins first, I’m going to say it’s the Mariners, based exclusively on this spring’s exorcisms in St. Louis and Toronto. The Mariners have been at the sports-misery thing way longer.

Vindication of the forsaken. It’s a trend.