Thiel: ‘Get out’ is what Trump told NFL players

Before his racist tweets, Trump suggested protesting NFL players should leave. He doesn’t care about the difference between dissent and disloyalty. Some of us do. 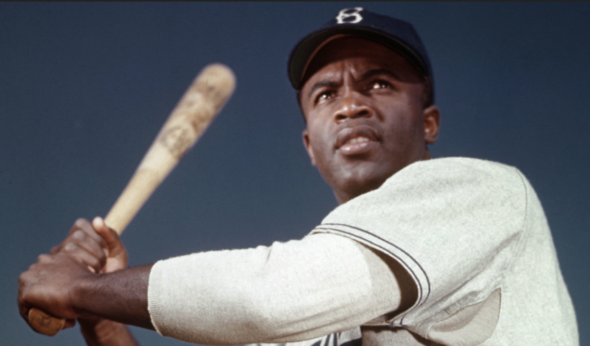 In 1949, Jackie Robinson was called to testify before Congress in order to ostracize another high-achieving African-American, Paul Robeson. / History.org

The furor over President Trump’s racist tweets that four liberal congresswomen should pack up and leave has inflamed U.S. culture perhaps as no other reckless rhetoric in his tumultuous tenure. But on the eve of training camps for NFL teams, it needs to be pointed out that the vile attempt to dis-Americanize his critics didn’t reveal itself just last week.

The first trial balloon in his tenure to re-start the dormant nativist trope of “love it or leave it” went up in sports, the platform upon which numerous American cultural conflicts historically have played out.

The passage of time coupled with the contemporary overload of news makes it easy to forget that in May 2018, Trump responded to the word that NFL owners and players agreed on a policy that could result in discipline if players knelt or otherwise protested during the national anthem.

The new protocol came after the 2017 season of widespread, non-disruptive protests by numerous African-American players over police shootings of unarmed black men and social injustice, which followed QB Colin Kaepernick’s lead in 2016.

After Trump earlier called protesters “sons of bitches” who should be fired, he gave an interview to Fox & Friends on Fox News.

Between the new NFL policy and the players’ own divisions on how to proceed in 2018, the protests dissipated, although some players took up the league’s option of staying in the locker room during the anthem.

So in the mind of Trump, he won, Few others then thought much about his suggestion of relocation.

The change in anthem protocol meant basically he got away with demonizing a nearly all-black protest by skipping over the cherished American value of dissent and conflating the protests with disloyalty. With Trump, it was easy, because loyalty is everything to him. As you may have heard, there’s no room in the Trump White House, Cabinet or Republican Congress for dissent.

So why not try to dis-Americanize again?

Since no damage resulted from cursing, insulting and marginalizing successful people in one of the nation’s highest-profile endeavors, Trump leaped at another chance to divide and demoralize when “The Squad” of four left-wing House members had a split with the Democratic Party’s mainstream.

Personally, I find some of the words and deeds of the congresswomen aggravating, sometimes as pointlessly provocative as Trump’s, especially in characterizing House Speaker Nancy Pelosi’s disagreement with them as race-based. But differences of opinion do not invalidate the holders of the opinions — in either direction.

The Squad’s misfires opened the door for Trump to toss a distraction bomb. Despite the subsequent days of outrage, Trump shows no sign of backing off. Particularly now, when one of his preferred targets, NFL players, returns to the media mainstream, where Trump excels in creating distractions.

If players respond honestly to media questions about Trump’s racism, prepare for more invitations from him to go back where they came from, even if their ancestors go back farther in America than the First Family’s.

The attempt to divide Americans by manipulating sports figures has several remarkable antecedents. One stands out.

Seventy years ago — two years after he became MLB’s first African-American player —  Brooklyn Dodgers star Jackie Robinson appeared before the House Un-American Activities committee at the behest of John Wood, a Democrat from Georgia and former Ku Klux Klan member. Wood hoped to use testimony from Robinson to help smear the other great black athlete of the day, Paul Robeson, as a Communist. A fuller story is told here in The Nation magazine.

Robeson was a towering cultural figure. A two-time All-America football player at Rutgers, an honored orator, singer and actor with a law degree from Columbia who was made wealthy by his popular talents, Robeson also was a social/political activist. He was open about not wanting blacks to serve in any conflict against the Soviet Union after World War II. He had been quoted as saying communism was a better way than the imperialist capitalism of the U.S. and Great Britain.

Robinson’s testimony did criticize Robeson, but he did it in a way that made clear that disagreement over issues did not invalidate the worthiness of the person.

Robinson said that Robeson “has a right to his personal views, and if he wants to sound silly when he expresses them in public, that is his business and not mine. He’s still a famous ex-athlete and a great singer and actor.”

Robinson, who did not seek the audience in front of Congress, didn’t give Wood what he wanted, yet artfully made the point that disagreement on issues did not warrant exile.

“I didn’t want to fall prey to the white man’s game and allow myself to be pitted against another black man,” he later wrote. “I knew that Robeson was striking out against racial inequality in the way that seemed best to him.

“The fact that it is a Communist who denounces injustice in the courts, police brutality, and lynching when it happens doesn’t change the truth of his charges. Just because Communists kick up a big fuss over racial discrimination when it suits their purposes, a lot of people try to pretend that the whole issue is a creation of Communist imagination.”

The belated explanation largely went unheard. In the 1950s, the Red Scare overwhelmed much rational thinking. Robeson was scorned by many, his music banned, his passport revoked. He died broke and alone in 1976 at 77.  He didn’t “go back,” but he was cast out, which is the same thing.

For five years of fear and dread, McCarthy’s unfounded, relentless and scurrilous attacks in bogus pursuit of Communist infiltrators caused more than 2,000 federal employees to lose their jobs. They, too, were cast out for no reason.

McCarthy’s brutal tactics, corruption and lies eventually brought about Senate censure and an end to one of the darkest periods in American history. He was taken down in part by the courageous work of CBS journalist Edward R. Murrow. His most trenchant quote of the McCarthy saga in 1954 is having a national revival, not a minute too soon:

We must not confuse dissent with disloyalty. We must remember always that accusation is not proof and that conviction depends upon evidence and due process of law. We will not walk in fear, one of another. We will not be driven by fear into an age of unreason if we dig deep in our history and our doctrine, and remember that we are not descended from fearful men. Not from men who feared to write, to speak, to associate, and to defend causes that were, for the moment, unpopular.

The Democrats’ “Squad” is unpopular to many right now, just as were NFL protesters who dared to make some people uncomfortable during their Sunday recreation. Soccer star Megan Rapinoe did the same during and after the Women’s World Cup.

If athletes and politicians return fire, they will remain contemptible to some, because they are deliberately miscast as disloyal. In fact they are dissenters, a concept, as Murrow said, that is part of American history and doctrine, not some self-serving mythology such as the nationalists’ claim that America was founded as a white Christian nation.

As Robert Kagan of the Brookings Institute put it in a Washington Post column, “In the Declaration of Independence, which Abraham Lincoln recognized as the quintessential statement of American nationalism, there is not a word about culture, color or Christianity.”

A nation borne of dissenters, enriched for parts of four centuries by “squads” of immigrants who were not descended from fearful men or women, now is led by a fearful man.

As Robinson did not want to be pitted against another black man, so Americans do not want to, as Murrow said, walk in fear, one of another. To demand respect for the difference between dissent and disloyalty is to enable power and disable fear.

To know the difference is so American. To stay ignorant of it is to return to the wretchedness of Wood and McCarthy.