Another hit for Edgar: He’s a Cooperstown hero

A boisterous crowd of Mariners fans celebrated Sunday with Edgar Martinez. He gave them credit for helping him reach the Hall of Fame. But know this about Martinez: He got the best of Rivera. He batted .579 in his career against the game’s most formidable reliever, with two home runs, a .652 on-base percentage and a 1.053 slugging percentage.

“He was a real particular hitter. There wasn’t too many holes on him, you know, then he was able to hit the ball better than the rest.’’

That’s another example why he deserved his Hall of Fame induction. He wasn’t great just against Rivera or closers. His batting average was .321 against the 14 other Hall of Famers he faced in his career. As former teammate Jay Buhner said in an MLB-produced video that introduced Martinez: “He was the most feared right-handed hitter. Period.’’

His Hall of Fame plaque includes the lines: “One of the game’s best pure batsmen. Defined designated hitter position with a precise batting eye and ability to consistently drive the ball to all fields.’’

He also played the most important role in the 1995 postseason victory over those damn Yankees. In Game 4, he hit two home runs (including a grand slam) and drove in seven runs to lead Seattle back from a 5-0 deficit to even the series at two apiece.

Then, in the most memorable moment in Mariners history, he drove in the tying and winning runs with a double off Jack McDowell in the 11th inning of Game 5, scoring Joey Cora and Griffey, to give Seattle the series. That series, Edgar hit a team-high .571 with 10 RBIs.

Just prior to that series, I asked then-Minnesota Twins manager and two-time World Series winner Tom Kelly which batter he would most like to have at the plate with the game on the line. He said it was Edgar, of course, adding, “That’s pretty simple, isn’t it?’’

“I thought Edgar was a tremendous hitter,”  fellow 2019 Hall of Fame inductee Mike Mussina said. “He was the guy that you didn’t want up there in a really big spot. There were some circumstances and situations where I would have taken Griffey over Edgar because I had better numbers against Griffey. I felt better against Griffey. Edgar just always seemed to get a good swing on it, put the barrel on it, hit it hard.

“Those guys were really, really frustrating for us pitchers. Edgar was willing to use the whole yard. He would hit it from the right field line to the left field line. He hit with power. He drove it into the gaps. When you have all those weapons, it’s tough to get you out. So I would not ever want to see Edgar in a big situation with two outs and runners in scoring position. Never.’’

He achieved all this even though he had a vision condition called strabismus, in which the eyes fail to align properly when looking at an object.  The condition is why he wore glasses to read his speech Sunday.

Strabismus is a condition that no other major leaguer has reported to have had. To deal with it, he spent time each pre-game doing eye exercises to counteract the condition.

“I had just this routine during the day that prepared me,’’ he said. “The other part was that I could start the season with a bat that was 31 ounces. But by the end of the season, I was hitting with almost 30 ounces. It helped me be consistent.”

Not only did Martinez play his entire career with the Mariners, he worked for them after retirement. He was batting coach for several years and helped hitters a tremendous amount. Former Mariners second baseman and possible future Hall of Famer Robinson Cano said he helped “big time.

“You haven’t seen a better hitter than Edgar.’’

Former Mariners manager Lou Piniella, who also should be in the hall, said, “I’m so happy for Edgar. A very deserving guy. Great hitter. Played all those years in one organization. Has been an icon in Seattle. Great family man. It’s so cool.” 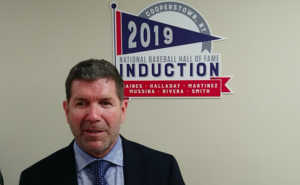 Griffey also wrote the foreword in Martinez’s recently released autobiography, Edgar, which included this: “Playing with Edgar, being his teammate and friend, was another one of the joys of my career. I think it took a little longer for people to realize how good he was. But when you put up his numbers against everyone else’s, you see how consistent he was . . .

“I’m thrilled we’re going to be teammates again in the hall.’’

Martinez believes Seattle fans played a part in him going from as low as 25 percent of the vote total in 2014 to the final 85 percent.

Edgar fans here at the ceremonies, which drew a crowd estimated 55,000 on a hot, humid day, were the second-most behind Rivera (naturally, more New Yorkers were there), with many wearing his jersey, holding up signs with his name, and chanting, “Ed-gar, Ed-gar!’’ The large crew from across the country drew compliments from the assembled.

“I appreciate it. I feel great,” he said afterward at a press conference. “It was pretty awesome to see the fans and hear them chant.”

His drawn-out selection over a decade left Martinez annually wondering if he would see this day.

“I’m very humbled to see the support that the fans have given me through the years,’’ he said. “It’s been incredible . . . I think they played a big role, because they were very active for the last few years on social media. I got a lot of support. It’s an honor for me to go for the Seattle fans.

“They have been amazing to me through my whole career.’’

He added this during his induction speech: