DE L.J. Collier was the first casualty of Seahawks’ camp with a sprained ankle. But since he was a first-round pick, the ghosts of past drafts lurked in the minds of longtimers. 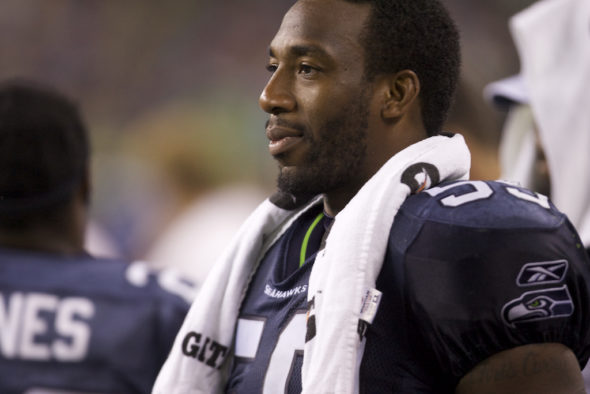 Tuesday was going to be DE L.J. Collier’s turn at the Seahawks’ training camp podium. With many clubs in the NFL, the first-round draft pick often is the first man up for interview requests. But in Seattle, lower expectations are built in.

Sure enough, Collier lived down to those expectations. It wasn’t his fault, and the Seahawks hope it isn’t his fate to extend the club’s dubious first-round outcomes.

During the first full-pads scrimmage of camp, Collier tangled in pass protection against RT Germain Ifedi, fell, and spent a couple of minutes on the ground. When he rose, his right leg barely bore weight. Finally limping awkwardly to the sideline, Collier sat on the ground for several minutes of attention by the training staff. A cart arrived to take him to the locker room, into which he hopped one-legged.

The club was mum about the first noteworthy injury of camp, but apparently the worst did not happen. ESPN and NFL Network reported that Collier has a high ankle sprain, and included speculation that he would miss the entire preseason, or about five weeks.

Even if no bone was broken, two aspects are odious:

Taken with the 29th overall pick in the first round from Texas Christian, the 6-2, 291-pound Collier was considered a reach by some scouts partly because he was a late bloomer who started only in his senior season. So far in camp, he has seen little time with the No. 1 unit.

LT Duane Brown, who saw Collier go down, described him Tuesday as “someone who I think has a lot of potential, still kind of raw in his technique.”

The cure for rawness mostly is experience, which he now won’t get for awhile. Speaking Monday before the injury, defensive coordinator Ken Norton Jr. was, as always, upbeat about Collier’s future.

“The kid is big, strong, fast, just like we expected,” he said. “He loves ball. I think that he’s really getting comfortable with his environment now, and he’s certainly going to help us.”

Getting the most time at the D-end spots were Quinton Jefferson (fifth round, 2016), Cassius Marsh (fourth round, 2014) and Jacob Martin (sixth round, 2018). No one has established himself anywhere close to Clark and Reed as pass rushers.

So depending on the severity of the injury to Collier, the Seahawks may be in the market for another rusher, which was the role that was supposed to have been filled by Malik McDowell. He was Seahawks’ top pick in 2017 (35th overall), but preferred a reckless ride on an ATV instead of pro ball.

His injuries and subsequent arrests without playing a down of pro ball rocket him to the top of the dubious list of Seahawks high draft picks come to naught, or nearly so.

The story is a familiar one to Seahawks fans. While there is no attempt here to say a simple sprained ankle by Collier consigns him to the same dustbin, it is understandable if followers thinking about the history develop an eye twitch not unlike Inspector Clouseau’s Pink Panther boss Dreyfus:

A quick scan of the past 20 years, which includes the Mike Holmgren era, reveals a handful of good-to-greats but many more epic whiffs: 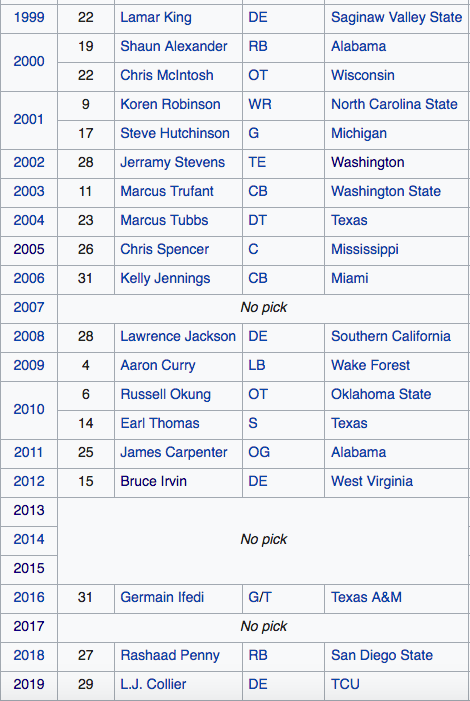 Yes, we all know the caveats. Every team’s list has a somewhat similar look, and the work since 2010 of general manager John Schneider in the lower rounds and among undrafted free agents has made the Seahawks one of the three most successful NFL teams of the decade.

Still, imagine what might have happened if the Seahawks had hit on just one or two more top picks.

One of the most vivid debacles occurred the year before the arrival of Carroll and Schneider (which is, for many newbie 12s, the time before time began).

Taken in the first round, fourth overall, by GM Tim Ruskell was Aaron Curry, a 6-4, 250-pound linebacker from Wake Forest. Many scouts besides Ruskell had Curry as a top-15 pick, and he certainly looked the part. Without belaboring, Curry had neither the head nor the heart for the game.

He lasted 48 games, the last 13 with Oakland, which in midseason 2011 gave the Seahawks a seventh-rounder for Curry. The Seahawks turned the pick into OL J.R. Sweezy, who started two Super Bowls and was far more productive than Curry.

Behind Curry in 2009’s first round were, as always, several notables, including LB Bryan Cushing and DE Clay Matthews from Carroll’s final team at USC. My favorite woulda-coulda-shoulda of the round was CB Malcolm Jenkins out of Ohio State, taken 14th by the Saints.

Can you imagine Jenkins, a two-time All-Pro selection and still a star with the Eagles, as the cornerback opposite Richard Sherman in the great Super Bowl defenses? The Legion of Boom might have pitched a seasonal shutout.

Again, there is no suggestion that Collier is Curry, or McDowell. But somebody had to acknowledge the 10th anniversary of Curry’s rookie season, and it also gives me a way to explain to fellow media jackals standing near me at practice why, as Collier was carted off, my eye was twitching.