The Mariners traded Mike Leake, Roenis Elias and Hunter Strickland for not a lot in return. Too many tanking teams are drying up the market. 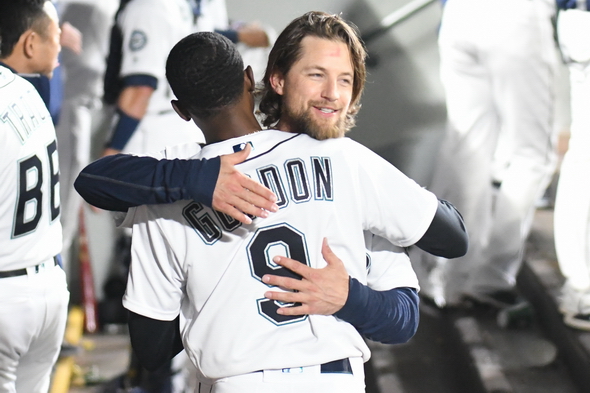 Starting pitcher Mike Leake got what he wished for — a trade home to Arizona. / Alan Chitlik, Sportspress Northwest

Mike Leake, 31, nearly pitched a perfect game two starts ago for the Mariners against the Angels and their Terminator, Mike Trout. Such is the wackiness of MLB that his value at the trade deadline Wednesday was a mere high-A infielder.

Jose Caballero, 22, was hitting .268 in the Diamondbacks system. He has 28 stolen bases, so if he does make the majors, it appears he’s fast enough to keep the Mariners out of a few double plays. Incremental value, yes; but something.

For the longest time, it didn’t seem as if the Mariners would get anything for Leake, whose professed goal, after the club announced in October their T-ball plan for T-ball Park, was to be gone from a place that was self-immolating.

“I feel like I’ve been auditioning all year just because they were trying to trade me in the off-season for a little bit,” Leake told the Seattle Times a week ago. “I definitely think I’m on the radar.”

Despite the delays in determining his future, he sucked it up in his innings-eating, no-walks, fast-tempo manner. Playing for a deliberately crappy outfit with MLB’s worst defense, Leake was 9-8 with a 4.34 ERA in 22 starts, including Tuesday night, when he threw 89 pitches in 100-degree heat in Texas before succumbing to a four-run sixth inning. He thought he might be held out of the game because of a trade, but when no news came, he stepped into the blast furnace and did his professional best.

Because of the remaining portion of his five-year, $80 million contract he signed with St. Louis in 2016, Leake was financially toxic. But things changed Wednesday for the D-backs when they stunned baseball by trading their ace, Zach Greinke, to Houston for a haul of four prospects.

Because the D-backs were 54-54 entering Wednesday games, one of 10 National League teams within seven games of the final playoff spot, they still wanted to look like contenders. They knew that Mariners general manager Jerry Dipoto had knocked on the door for months peddling Leake. Finally, they were needy, offering up a modest prospect if the Mariners were willing to eat some of the contract, reported to be $10 million.

Because Leake lives in suburban Phoenix and pitched for Arizona State, he gets to go home. He is the numerical replacement in the rotation for Greinke, which is asking a lot, but he’s also playing for a team that wants to win.

He gets what he wanted, and Dipoto gets wanted he wanted: A fig leaf. Caballero isn’t much, but to come away from the season’s lone trade deadline with nothing for a guy who nearly pitched a perfect game, would have been embarrassing for the madcap dealmaker. He can thank Arizona GM Mike Hazen, who offered a bit of a snarky rejoinder for the day:

Mike Hazen on what happened today: “I didn’t start out today hoping to channel Jerry Dipoto as my spirit animal, but somehow we sort of ended up there.”

In pursuit of his twin goals of younger and cheaper, Dipoto in another deal Wednesday also unloaded another couple of 30-somethings, relievers Hunter Strickland (30) and Roenis Elias (31 Thursday), his two closers.

Believe it or not, the Washington Nationals had a more horrid bullpen than the Mariners, entering Wednesday with an MLB-worst ERA of 5.97 and 20 blown saves, tied for third most.

All you need to know is the Nats’ set-up reliever lately has been Fernando Rodney, 42, the stroke-inducing former Mariners closer who was cut earlier this season by Oakland. The A’s aspire to be a respectable team, which is not possible if Rodney and his imaginary quiver of arrows are on the roster. Presumably, Washington will think that way too.

Since the Nats entered Wednesday 56-51 and in a virtual three-way tie with the Phillies and Cubs for the NL’s two wild-card spots, they needed veteran help. The Nats gave up three pitching prospects: Lefty Taylor Guilbeau, 26; lefty Aaron Fletcher, 23, and righty Elvis Alvarado, 20.

At the beginning of the season, MLB Pipeline ranked Guilbeau the 15th-best prospect in the Nationals system and Fletcher 21st. Alvarado is unranked mostly because he’s converting from the outfield.

Dipoto said Guilbeau will report to AAA Tacoma and may be called up this season. Fletcher is likely destined for AA and Alvarado to the Arizona rookie league.

Obviously, none of the four youngsters acquired by Seattle were highly rated by scouts, but their profiles generally fit Dipoto’s plan for system depth.

Nationally, aside from two large deals including the Greinke trade, the midseason market didn’t create much change compared previous years, mostly because of the unintended consequence of so many teams joining the Mariners in deliberately tanking. The pool of younger, cheaper talent has been picked over.

In a recent piece, longtime Washington Post columnist Tom Boswell excoriated MLB for the trend, calling the practice “fan abuse.” Just because the Houston Astros and Chicago Cubs followed the formula to World Series titles doesn’t mean it’s sustainable for many teams at all times.

Boswell has watched the nearby Baltimore Orioles for decades, and saw that the declaration of a period for rebuilding doesn’t mean winning will happen:

In 1987-88, the Birds lost 202 games. Full rebuild mode. In the 31 seasons since, the Orioles have won 90 games just three times. At one point, they had 14 straight losing seasons. Why did D.C. get a team? Because the Orioles devalued their brand so much that there was nothing for MLB’s other 29 owners to protect by keeping a team off Baltimore’s doorstep.

Of the current 30 teams, 20 have never in the past 50 years lost more than 200 games in consecutive seasons, at least not after you exclude their early expansion-team days. Yet those 20 teams have won 33 of the past 50 World Series, exactly the ratio you’d expect if there was no difference between having a Horror Era and never being truly awful at all.

The Mariners ”horror era” has yet to finish year one. None of the off-loading of talent Wednesday suggested that the payback on a return is a moment closer.

Then again, I have yet to channel my Dipoto spirit animal.