Paxton Lynch, the underdog in the backup QB race, not only helped lead the Seahawks to a 22-14 win, he was able to stick it to his previous team, the Broncos. 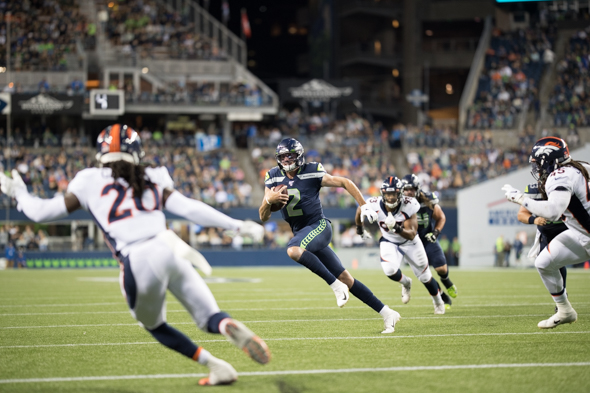 Mock, if you must, the NFL exhibition season. Go ahead and call fake football the worst full-price thing on the national sports calendar. Besides the fake football of the Pro Bowl, I mean.

The cruel rhetoric cannot shield the bright light of truth that was seen Thursday night at the Clink. I’m pleased to say I was there when Paxton Lynch rose from mud and leaves to overtake Russell Wilson as Seahawks quarterback, and stepped over the carcass of his former team to do it.

Or, if you insist:

Maybe Lynch didn’t quite surpass Wilson. But at the moment he has one more passing touchdown and one more rushing touchdown than the NFL’s most expensive player.

Lynch has to be scored the winning pitcher in the Seahawks’ 22-14 triumph (box) over the Denver Broncos. So he’s 1-0 in exhibition season, whereas Wilson, who didn’t play a lick for the first time in his career, remains stuck on a four-game losing streak from August a year ago.

Seems to me we at least have a quarterback controversy.

Playing the entire second half, Lynch produced better results than his sometimes dubious work in training camp, completing 11 of 15 passes for 109 yards and a rating of 115.7, plus 38 yards in four scrambles. Besides Wilson’s 0h-fer, the other camp QB, Geno Smith, was 3-of-9 for 58 yards, and 21 yards on three scrambles.

Quibblers will make the point that Lynch’s work largely came against the portion of the Broncos roster made up of people who will be Amazon van drivers after Labor Day. At least Smith had to square up against salty veterans like All-Pro DE Von Miller.

That did not diminish a bit the grin on Lynch’s face.

“It felt great,” he said. “It felt good to have all that hard work pay off.”

Post-game, coach Pete Carroll added to the drama by dropping his veil of secrecy and disclosing that Smith will have a cyst removed from a knee, a minor procedure that nevertheless will keep him out five to 10 days.

“We’re hoping for that,” said Carroll, who allowed as to how they are looking to bring in another quarterback.

In the intense NFL calendar, 10 days is at least an eon or two where Smith can’t compete against Lynch, the definite underdog entering the game in the backup QB race.

The Lynch saga was enhanced Thursday because he beat the team that used a No. 1 draft choice, 26th overall, on him in 2016. He was the third quarterback taken, behind Jared Goff and Carson Wentz.

But after starting just four games in two seasons (four TDs, four INTs), Broncos boss John Elway unceremoniously cut him on the eve of the 2018 season. No NFL team gave him a sniff, so he had to sit out the season.

“While everyone else was playing, I was sitting at home, watching TV,” he said. “I was working hard, building myself up, trying to get back where I was.

“I was excited when Seattle gave me the opportunity to come here.”

He was so excited that he appeared to throw some shade on his days as a Bronco.

Naturally, that made news in Denver. Before the game at the Clink, Elway returned service.

“I don’t know how Seattle runs things,” Elway told The Athletic. “I’ve never been in their camp, just played against them. But I feel comfortable with where we are as far as being friendly.

“I will say this: If you don’t have success, nothing is very friendly, and when he was in Denver he didn’t have a lot of success there. So therefore, I can understand in his mind why it was not a very pleasant stay in Denver. And it’s too bad it happened. I’m glad he’s getting another shot up here, and it’d be nice to see him have some success.”

Lynch after the game dismissed any revenge factor.

“No,” he said. “I know that there was some talks that it was about this or that. I love those guys. They mean a lot to me.”

Probably true. But Elway likely wasn’t among “those guys.”

Depending on how things go in Seattle, the flop in Denver, however embarrassing for Elway, may have been worthwhile for Lynch.

“There was was a lot that went into this,” Lynch said. “Having that year off played a big part. I just wanted to go out there with my guys and win a football game and show those coaches they can trust me if my number is ever called upon. I felt like I did a good job in that.”

“He did a really good job,” he said. “Handled himself well. Good tempo with the game, and ran the ball really well. He’s a big unit (6-foot-7) running — you saw that down by the goal line.”

That was a reference to Lynch’s sweeping nine-yard scramble for a score that put away the game 22-6 with 12:55 remaining. His goal-line spin after a collision was a tiny echo of Elway’s famous “helicopter spin” in Super Bowl XXXII. Which is probably another thing Elway didn’t want to hear.

Other virtues accrued for the Seahawks: Quality special teams play, notable rookie debuts for the University of Utah rookie tandem of SS Marquise Blair and LB Cody Barton, a startling variety of blitzes that produced a safety from safety DeShawn Shead, and four catches, one for a TD, by undrafted rookie WR Jazz Ferguson.

Balancing that out were 15 penalties for 131 yards, a sprained ankle for RT/TE George Fant, and a temporary shortage of running backs so severe that Xavier Turner, a free agent signed off the street Wednesday, saw his first Seahawks action of any kind when he stepped into the opening huddle Thursday. He led Seattle with 42 yards rushing.

But anytime a team can manufacture a quarterback controversy out of a preseason game, even a positive one, it’s a worthy August evening.