Thiel: Shead is an echo of the Seahawks’ Boom

A blitz for a safety Thursday woke the big-play echoes of the Legion of Boom. Fitting that it was by DeShawn Shead, who seeks to be the last Boomer standing. 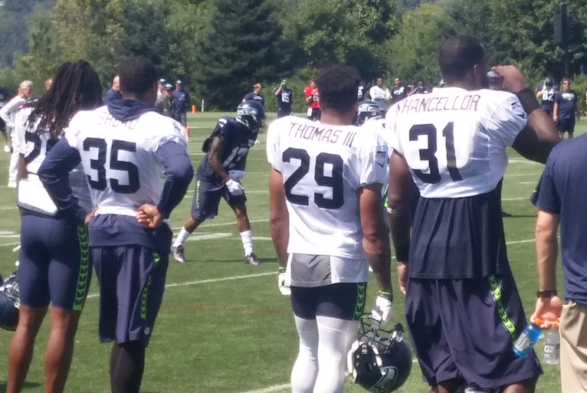 When the Seahawks defense dials up a blitz for a cornerback or a safety, to say the DBs get fired up . . . it’s a little like finding out Beyonce is suddenly single.

“I was definitely excited when I heard that call,” said DeShawn Shead.  “Anytime we get a chance to get after the quarterback, we take it like getting a pick. We enjoy the opportunity.”

Late in the third quarter of Thursday’s fake-season opener at the Clink, Shead broke untouched from his safety spot to splatter Broncos QB Drew Lock in the end zone for a safety and a 15-6 lead.

Yes, Lock was a third-stringer. Yes, the rest of the Broncos were sixth-stringers. Yes, it was a glorified practice. Still . . .

It was an echo of the Boom.

“Probably my favorite play of the night,” coach Pete Carroll said afterward.  “It was a great blitz, a great call at the right time, and we hit it right.

“It was great to see DeShawn do that.”

Big defensive plays were the mark of Zorro for the Legion of Boom, of which Shead was a part. From 2012-17, he was swimming in the NFL’s deep end, playing 54 games, including 22 starts, a vital part of special teams. Undrafted out of Portland State, Shead was among the most popular players in the locker room because of his personality and earnestness.

He tore an ACL in the playoff game in Atlanta after the 2016 season, returning in 2017 for just two games. Then Shead shared the fate of Richard Sherman, Earl Thomas and Kam Chancellor.

In 2018 free agency, the Seahawks made Shead an offer. But he took a better one from Detroit — one year for $3.5 million. The Lions let him go on cutdown day, then rehired him four games into the season. He played 12 games, started once, made 18 tackles, and finished on injured reserve because of the knee.

Then began the wait in free agency. Crickets. For more than four months.

He stayed after it, mostly at the Ford Sports Performance Center in Bellevue. Finally the Saints asked him to come down to New Orleans for a workout. No offer followed.

Then the Seahawks, nervous about depth in the secondary, called his agent July 27. On Aug. 8, Shead had a sellout crowd on its feet.

“It was the best feeling and to just come out here and play at CenturyLink one more time,” he said. “Just show Seattle, once again, that I can be the player that I know how to be.

“It’s not what I did for them in the past. It’s what I can show them now. My knee is healed, I feel great. I just want to show them.”

It’s a chance, but a small one.

On a non-guaranteed deal for the veteran minimum of $930,000, Shead (6-2, 212) is getting more action at safety rather than corner, and will need to play both, as well as special teams. The Seahawks invested draft capital in the secondary with Marquise Blair (second round) and Ugo Amadi (fourth), and have returning starters at safety in Tedric Thompson and Bradley McDougald, and at corner in Shaquill Griffin and Tre Flowers.

Here’s the kicker: He’s thirty. In the hyper-acceleration of the NFL world, it’s the new 40. The baby-faced Shead is the oldest guy in the position group, two months younger than Thomas, now in Baltimore.

Asked about the biggest difference between the Seahawks he left and the team to which he returns, he was honest.

“Age — everybody’s younger,” he said. “Those guys were all older than me. I was able to lean on them, and learn from some of the best in the game.”

The young guys know it too.

“You know, Shead is probably like 35 or 36,” Thompson said, laughing, after practice Monday. “Shead’s old, and we’re still young, you feel me? So, to have an old guy like that helps us a lot.”

Setting aside his youthful arrogance, Thompson remembered his rookie year when he was foundering.

“A lot of stuff wasn’t clicking,” he said. “D-Shead took time out of his day to bring me to the DB meeting room, and go over the whole group of special teams. After special teams, we went over a whole lot of defense. I was learning a lot. I still actually got a lot of questions now . . . Just having an older brother like that (who is) able to help.

“It’s crazy because he can play nickel, left corner, right corner, Mike, Will, Sam (the three linebacker spots), free safety, strong safety. He can play whatever he wants. That just shows a lot how smart he is.”

There remains the trademark from his Boom years.

“He came up to me today and said there was one thing he was going to work on today: To make sure he was thud up on the running backs, thud up on the receivers,” Thompson said. “He was doing that all day. It’s inspiring to look at a guy like that.”

As Shead Thursday night thudded up Drew Lock, the Boom had itself an encore.