Thiel: A chance to write some stories from inside

After the sagas of the Coliseum, Kingdome and baseball/football stadiums, Tod Leiweke asked me if I wanted to write about the next big thing. I said sure. 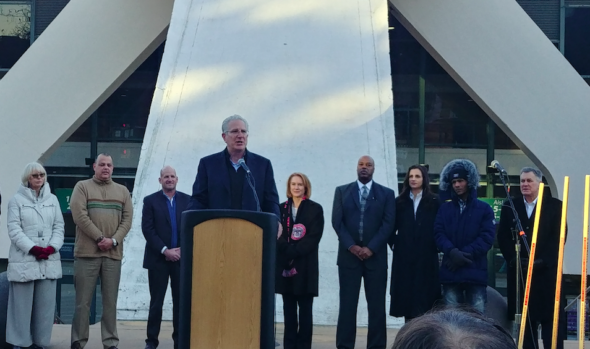 Hockey Partners CEO Tod Leiweke, here at a ceremonial groundbreaking event at the arena in December, has some stories to tell. / Art Thiel, Sportspress Northwest

When the Kingdome was conceived in the early 1970s, the notion of a nine-acre roof made of concrete, unique in the world, seemed preposterous. It wasn’t. At least, for 24 years and host to four major sports teams, it wasn’t.

When in the middle 1990s the plans for a replacement baseball park were disclosed, they included a first-of-its-kind, giant steel retractable roof that ran on railroad tracks. How 1880s. How implausible. The project just passed its 20th anniversary.

Not long after baseball’s park plan emerged came football’s plan for a replacement stadium. The absurdity was not in the roof — it didn’t have one — but in the financing. Team owner Paul Allen, one of the world’s richest men after Microsoft went public 10 years earlier, sought a $380 million tax subsidy from the state, and was willing to fund a statewide, one-issue election to get it.

Right. You betcha, Paul. You hit the pinata on your first swing, with software. That’s it for you, pal.

Except he won the election, built the noisiest stadium in the NFL, and won a Super Bowl.

Now before the Seattle House of Sport is the most audacious plan of all — creation for an NHL expansion franchise of a new arena/concert hall at Seattle Center, entirely with private funds, that will also include preserving the 57-year-old, 44-million-pound roof.

As one of the architects put it, “It’s like building a ship in a bottle.” For $900 million. While the North American sports and entertainment world watches, collective eyebrow cocked, until the planned opening in the middle of 2021.

The drama is richest when the acrobat has no net.

So when NHL Seattle CEO Tod Leiweke asked me if I’d be interested in a part-time gig writing stories from the inside of the project, he had me at hello.

Actually, it was hello again.

Leiweke was in charge of the Seahawks under Allen from 2003 to 2010, also helped direct the MLS launch of the Sounders, and helped with Allen’s first sports love, the NBA Portland Trail Blazers.

He returned to Seattle following gigs as CEO and part-owner of the NHL Tampa Bay Lightning, preceding a turn as COO of the NFL. From near and far, I watched as Leiweke seemed to demonstrate some chops for the sports business. So if he was persuaded that brother Tim’s little barn-raising on lower Queen Anne Hill was a plausible endeavor, there must be something to it.

“The journey building a new arena and launching a team offers many great stories,” he said over coffee. “We need great storytellers.”

I checked over both my shoulders to make sure he wasn’t making eye contact with someone else, and decided this could be fun to spend a little time working with www.nhl.com/seattle.

My Northwest hockey knowledge goes from Guyle Fielder to the Sedin brothers, but as with any club, depth needs improvement. Then again, larger stories in the run-up to the arena opening also are about history, civic politics, finance, construction — including the pending Northgate practice facility —  and the embrace of a region absent top-tier professional hockey for nearly a century.

For Sportspress Northwest, I will forego hockey/arena columns, but keep up with the usual mayhem dispensed by the Seahawks, Huskies, Mariners, Sounders and other Seattle and national sports developments.

Including one that will be a personal first.

During the first weekend in September, I will attend and write about the enshrinement ceremonies for the 2019 class of the Naismith National Basketball Hall of Fame that includes former Sonics star Jack Sikma.

The Mariners’ Edgar Martinez had to wait 15 years after retirement for enshrinement into the Baseball Hall of Fame. Sikma waited 28 years. I’ve never been to the hall in Springfield, MA., but if they have a Pro Sports Delayed Gratification Award, I have a nomination to submit.

I like to think I was barely more than a tall zygote when I worked the 1979 NBA Finals that brought Seattle its first sports championship with Sikma in the pivot. So the chance to travel to sacred hoops ground to put a bow on the Sonics experience in Seattle is irresistible.

The plan is to be back Sept. 8 for another Seattle religious experience — a Seahawks season opener.

You know the sacred text, from First Carrollians:

“Six days you shall labor, and do all your work, but the seventh day you shall not do any work, you, or your son, or your daughter, or your servant, or your livestock, or the sojourner who is within your gates, and instead raise among you voices to hail that which is holy — the naked boot from Wilson to Lockett for 23 yards.”