The Seahawks’ defense was picked apart, and the offense couldn’t manage a TD in the 25-19 loss at Minnesota. Then came bad news about WR DK Metcalf. 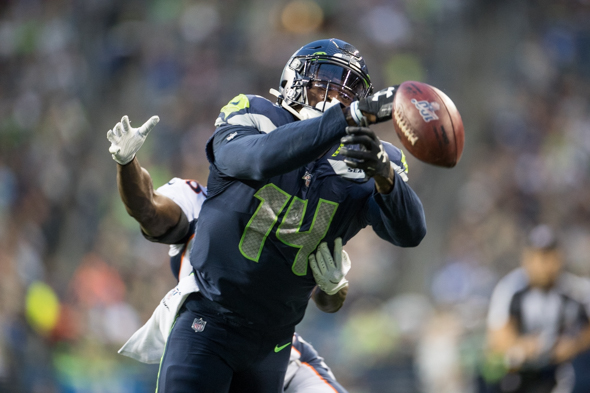 Disjointed as was the game Saturday night, the post-game delivered its own clank when Seahawks coach Pete Carroll disclosed that prized rookie WR DK Metcalf will need surgery to fix a knee problem that kept him out of the Seahawks’ 25-19 exhibition loss (box) in Minneapolis. Carroll, however, said the surgery isn’t major, and held out hope that Metcalf could return as soon as the Sept. 8 opener.

“Disappointed for him, because he is off to a fantastic start,” Carroll told reporters. “But I don’t think this is going to derail him for long.

“But he does have to get some work done.”

Another casualty was backup QB Paxton Lynch, whom Carroll reported was in the concussion protocol after a blow to the head in the fourth quarter. As he slid to conclude a three-yard rush, Lynch was struck by Vikings CB Holton Hill, who lowered his helmet and smashed into Lynch’s face mask. Hill was ejected as Lynch lay prone on the turf, finally rising slowly and walking off on his own.

Additionally, two other rookies were carted off the field in the fourth quarter. Second-round pick SS Marquise Blair had back spasms, and undrafted free agent OL Demetrius Knox had what Carroll termed a “nasty” quadriceps injury above his right knee.

That means as of Monday morning, the Seahawks’ top three draft choices are currently unavailable, including No. 1 pick L.J. Collier, who’s been out nearly all of training camp with a sprained ankle.

Carroll said Lynch was talking with teammates after the game. But that doesn’t necessarily mean a lot when it comes to concussions. The length of his stay in the protocol is unknowable.

The Seahawks could be QB-shorthanded for the third preseason game Saturday in Los Angeles against the Chargers, because the other veteran backup candidate, Geno Smith, sat out the Vikings game after having minor knee surgery to remove a cyst 10 days earlier. He has been practicing, however.

The Seahawks’ emergency QB signee, rookie J.T. Barrett of Ohio State, had to finish out the game and went 0-for-3 passing, including an interception on the game’s final play.

Besides injuries, the football news wasn’t swell for the Seahawks, either. Despite the return to play of the No. 1 unit that sat out the opening win against the Broncos, the Seahawks’ offense was held to four Jason Myers field goals and 221 yards of offense, including 76 on the ground. Backup RB Rashaad Penny had six carries for minus-2 yards.

The Seahawks were operating without linemen Mike Iupati, George Fant and Jordan Simmons, all down with minor injuries.

QB Russell Wilson looked reasonably sharp, connecting on six of nine passes for 92 yards before leaving after the second series, along with some other starters, who had 116 yards in the first 17 plays.

“I thought the first unit did a nice job,” Carroll said. “Russ was moving the club pretty well. We missed a couple of third-down throws that would have made a difference in their outing, but they did move the ball well.”

But given a chance to play with some of the first unit, Lynch didn’t do as well as he did against Denver, hitting six of 15 passes for 67 yards and making a couple of questionable reads on keepers. One of his passes was a seemingly certain red zone interception that was dropped by a Minnesota linebacker.

The only Seattle touchdown was defensive. In the second quarter, CB DeShawn Shead, a late free-agent signee, picked off a pass from backup QB Sean Mannion, who was under pressure from LB Barkevious Mingo. Shead went 88 yards untouched for the score. Against Denver, he picked up two points with an end-zone sack.

But the Seattle defense, playing without resting LBs Bobby Wagner and K.J. Wright, was mostly picked apart by Mannion and starter Kirk Cousins. Along with third-stringer Kyle Sloter, the three combined to hit on 28 of 35 passes for 272 yards. The biggest play was a 45-yard catch-and-run by RB Mike Boone, who juked Shead, a member of the Seahawks’ Super Bowl-winning team, out of a tackle and midfield ran away to set up a Vikings TD.

The defense had no sacks, three QB hits and two passes defensed. CB Tre Flowers had a 45-yard pass interference call, one of nine Seattle penalties for 105 yards, which was better than the 12 for 110 against Denver. The Seahawks blitzes were burned at least twice, one on the long gain by Boone and another that permitted a three-yard touchdown pass to Irv Smith, who was wide open in the middle of the end zone.

Besides the pick six, DT Poona Ford had the other defensive highlight. In the first quarter, the stubby second-year lineman burst through for a tackle that dropped a Vikings running back for a loss. Ford appeared to have forced a fumble, only to have a premature whistle blow the play dead nearly at impact. LB Austin Calitro, subbing again for Wright, had nine tackles.