It was time for the Seahawks to assert their NFL-best rushing game.The LA Chargers fell victim. Even C.J. Prosise came in for yards and praise in the 23-15 win. 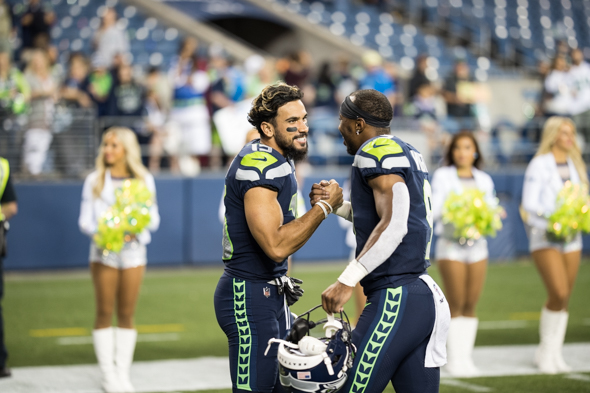 Keeping in mind that the Los Angeles Chargers’ star QB Philip Rivers had no part in the festivities, the Seahawks had themselves a revelatory romp Saturday night in Carson, CA. They appear to have confirmed a backup QB, embraced a boatload of talent at running back and are developing a defense capable of covering some of its talent deficiencies with a flashy package of blitzes.

The most noteworthy development in the 23-15 exhibition triumph (box) at Dignity Health Sports Park (the former Stubhub yard that is primarily for soccer) was the impressive play of C.J. Prosise and J.D. McKissic, two veteran runners who have shown little to nothing in August.

As part of Seattle’s 185 yards on the ground in 42 attempts, Prosise, who had been a no-show for most of his career because of injuries, had 32 yards and a one-yard touchdown in five carries. McKissic had 20 in six, and also caught three passes for 11 yards. Prosise had one reception for 15.

For a team that led the NFL in rushing last season and aspires to do so again, owning the line of scrimmage in the third week of the preseason was a mandatory minimum.

“We wanted to run and we were able to get it done,” coach Pete Carroll said. “We wanted to be real efficient and clean up things. The running backs did a really nice job. Everyone ran the ball well. That’s a real tribute to the system. I was really excited.”

The breakthrough for Prosise, a third-round pick from Notre Dame in 2016, was emotionally charged, his offensive teammates mobbing him after his TD run in the second quarter that put Seattle up 13-3. He played only one game last season and had one carry. This is his fourth year, and he has played only 16 games, after an array of pulls, tears and breaks.

“It was really good for C.J.,” Carroll said. “It’s been such a struggle for him. He looked good in practice this week. He played like he practiced. We’re really happy for him. He has another week to show what he can do. Just makes that position that much more solid.”

It’s now the deepest on the team. Chris Carson and Rashaad Penny are the 1-2 combo, and Prosise and McKissic are getting pressure from draftee Travis Homer and second-year powerhouse Bo Scarbrough. Carroll has been criticized for sticking with Prosise beyond reason. But his two big games against New England and Philadelphia in the 2016 season are burned into Carroll’s memory.

“I don’t give up on guys very quickly,” he said. “Knowing his situation, he has stayed with it every step of the way. If there comes a point where he won’t stay healthy, he won’t be able to play.

“He’s bouncing back. I’m keeping my fingers crossed. He’s a versatile player that adds so much.”

Geno Smith took a step toward claiming the job as Russell Wilson’s backup, completing 11 of 18 passes for 117 yards. He ran six times for 24 yards and an eight-yard TD, helping Seattle to 16 points in three consecutive possessions in the second quarter.

“I thought Geno was pretty efficient,” Carroll said. “He did a nice job on the move. I wish we could have converted (a drive that stalled when a fourth down red zone pass fell incomplete). But he moved the club. I thought he was solid. No turnovers.”

Carroll wasn’t ready to concede the job. Smith’s rival, Paxton Lynch, sat out recovering from a blow to the head in last week’s loss at Minnesota. Carroll said he expected Lynch to share time with Smith in the fake-game finale at 7 p.m. Thursday at the Clink against Oakland.

During the week, the Seattle receivers group was dealt a blow when a shoulder injury to David Moore was forecast by Carroll to keep the third-year receiver out “for a while.”  Moore caught 26 balls last year, including five TDs. His 17.1-yards-per-catch average led the team.

Fourth-round pick Gary Jennings finally had his first pro catch of 12 yards, but also committed a 15-yard illegal block penalty when he blind-sided a would-be tackler of Wilson on a scramble.

“That was a bad decision (by Jennings),” Carroll said. “It’s a new emphasis, and we won’t forget now.”

On defense, Seattle’s No. 1 unit held serve against a lot of Chargers’ second-teamers, including QB Tyrod Taylor. The game marked the healthy debut of linebackers Bobby Wagner, K.J. Wright and Mychal Kendricks, and a number of blitzes deploying them was disruptive. On the first three series, the Chargers went punt/field goal/ stopped on fourth down. The trio was out of the game in the fourth quarter when the Chargers’ third-stringers scored two touchdowns.

“It was really exciting for me to see them on the field at the same time,” Carroll said. “That’s the strength of our club, and they’ll be ready for the opener.”

After practice Friday, Carroll was optimistic about the return of two prominent players for the regular-season opener Sept. 8 against Cincinnati. He said DE Ziggy Ansah’s surgically repaired shoulder is at full strength, and is waiting on a minor groin strain to heal. WR DK Metcalf, who had a minor knee procedure last week, is recovering well and would return to practice.