Thiel: A new kind of QB controversy for Petersen

Chris Petersen has lost two QBs in four months to the transfer portal. The backup to new starter Jacob Eason has never played in college. Not a good Huskies look. 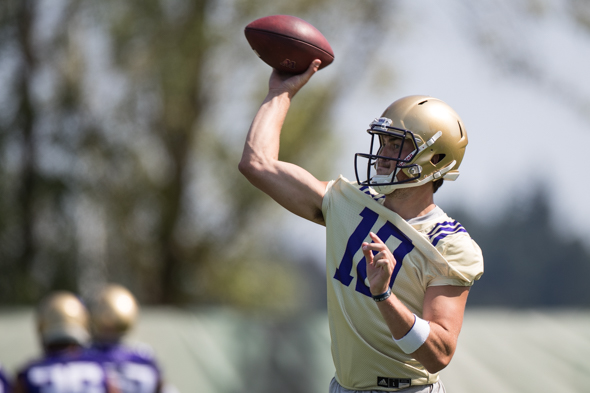 It wasn’t possible to determine whether Chris Petersen was wearing burlap underwear. Just seemed like it.

“Timing is a little bit awkward,” he said quietly. “I think that was a bit surprising.”

Actually, it was the Huskies football coach who seemed awkward Monday, answering questions for the second time in four months about a quarterback wanting to leave his high-profile program to get more playing time elsewhere.

Friday, Jake Haener, told he had been beaten out by Jacob Eason to be the starter next Saturday when the Huskies host Eastern Washington in the season opener, told Petersen he wanted out.

“We just had some discussions about what would be the right thing to do, and that was kinda that,” said Petersen, who had promised playing time for Haener against Eastern.

The unfolding saga of Washington QBs has to be a black eye for the program.

If you follow the evolving circus of NCAA rules regarding transfers, you know that changes in the last few years have liberalized rules so that transfers, especially among QBs, have become a trendy thing, because most players are longer punished with a one-year sit-out before returning to play.

As a stand-alone episode, Haener’s decision is not unusual. But in context, it could hurt the program, making Petersen’s messy handling of the QB roster a perceived liability to be pounced upon by rival recruiters.

Rival coach: They do a fine job there. The question is whether they like you, and what that means. Ask around. Just sayin’ . . .

Not only did Haener’s decision follow the April departure of redshirt freshman Colson Yankoff for the same reason, it happened just before the start of the season, meaning the falloff in experience and practice reps for the new No. 2, redshirt freshman Jacob Sirmon of Bothell High School, is steep.

Some observers around the UW program have suggested that Yankoff, a four-star recruit from Coeur d’Alene, ID, was better than classmate Sirmon.

After spring practice made clear that neither would advance past the heralded Eason, both stunned the program by entering their names simultaneously in the NCAA transfer portal.

Abruptly, Sirmon pulled his name back while Yankoff made his way to UCLA. It could be that Sirmon is no more ready to be an emergency replacement this season than was Haener last season for senior Jake Browning.

Struggling a bit against a good Cal defense, Browning was pulled for a series, TV cameras capturing his sideline shout to Petersen: “Why?” Haener threw an interception that went for a touchdown, the decisive play in the Bears’ 12-10 upset of Washington.

Turned out to be the last play of his Huskies career, which is really too bad since he chose to stay to compete against Eason, who at 6-foot-6 and 227 pounds is a near-certain high NFL draft pick good enough to have started and starred as a freshman with the SEC powerhouse Bulldogs.

Asked whether Sirmon was as ready as Haener would have been to step in if needed, Petersen said, “Sirmon made nice strides. It’s a little bit different.”

Interpreters of Pete-speak would suggest that means no.

So far, Haener, whose mother is a graduate of Bellarmine of Tacoma and UW, has said nothing publicly. His father, Ryan, told The Athletic that his son is taking the high road.

“He was extremely emotional about it, because he felt like he had won the job,” Ryan said. “It was a decision that was carefully thought of and talked about. I just want to say that the Haener family and Jake are thankful to the University of Washington for the opportunity, and have nothing but the utmost respect for Chris Petersen and Bush Hamdan and the entire staff and team at UW, and we wish them nothing but the best . . .”

Someone who isn’t wishing Petersen the best is UCLA coach Chip Kelly, who told reporters in Los Angeles earlier this month that the Huskies coach blocked Yankoff’s intraconference petition for immediate eligibility with the Bruins, meaning he has to sit for a second consecutive year.

“It’s unfortunate for Colson,” Kelly said. “ . . .Our hands are tied as far as that situation.

“I think everybody should be available. We don’t block anybody, that’s just our school and our (team) policy. So that’s a question for Washington, not us.”

Fortunately for the Huskies, they don’t play the Bruins until 2021, which by then Kelly perhaps will have blocked one or two of his players from transferring to Montlake.

In light of the unseemliness of the situation, in which the Huskies over-recruited the position by failing to stagger eligibility, I asked Petersen if he thought he should approach QB recruitment a different way.

“That’s something that’s always paid close attention to,” he said. “You see it across the country, right? This guy’s in, this guy’s out. It’s part of what’s going on right now. It would be naive of us to not pay attention to it. For all (player) groups.

“You can’t have one guy. There’s always going to be a handful of guys competing at that position. What the best order is, how that works —  that’s never going to be scripted out like that. That’s not how it works. Do we need to pay attention to it, and have a strategy? Absolutely. What that looks like is to be determined.”

Sounds like randomness will no longer a part of things. And while we await Petersen’s strategy to avert further embarrassment, there’s a couple of interim things that could prove helpful for his program.

Drop the resentment toward what amounts to college free agency and roll with the new NCAA reality, and make sure all option keepers, dives, roll-outs and bootlegs are stripped from Eason’s playbook. And nothing beyond a three-step dropback.