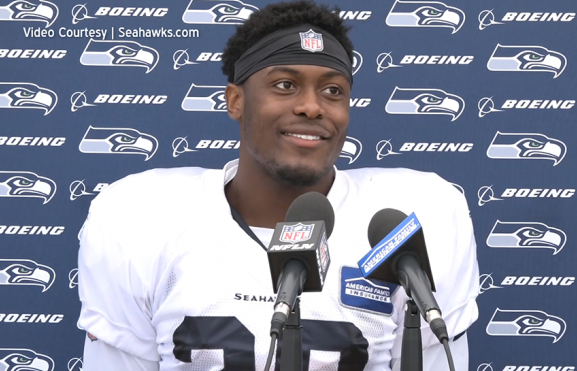 The good news for fans Tuesday from Seahawks camp was that DE Ziggy Ansah, the heralded free agent signee destined to fix a flaccid pass rush, made it to his first Seattle practice.

The bad news was that two more members of the 2017 draft class, WR Amara Darboh and DT Nazair Jones, won’t be part of the team, meaning only three from that group are apparently certain to start in the Sept. 8 opener: CB Shaquill Griffin, FS Tedric Thompson and RB Chris Carson.

The aspirational news was that not only is CB Ugo Amadi from Oregon one of the few uninjured players from the 2019 draft class, the rookie has been anointed with a semi-sacred expression from coach Pete Carroll.

“He’s shown special stuff,” Carroll said after practice Tuesday. “He’s really jumped out. In every game, he’s done something good. That stands out in your mind. It might not be play after play that he’s doing stuff. He’s learning and growing like the other players, but he seems to have a knack for doing something.

“We are looking always for the unique qualities. That’s a unique quality, the guy that jumps off the film because he makes a play, one way or the other.”

In the first three preseason games, Amadi has defended the pass and the run, twice hit the quarterback, returned punts and splattered punt returners. Given the injuries among his classmates, the most distinctive feat is that he has missed no practice time.

Carroll said that Blair may return to play some in the fake finale at 7 p.m. Thursday against Oakland at the Clink, but the rest are speculative. More will be known around 1 p.m. Saturday, when all NFL teams will pare down rosters from 90 to 53, which includes injury-list decisions.

In the absence of stars such as Doug Baldwin, Earl Thomas, Richard Sherman, Kam Chancellor, Michael Bennett and Cliff Avril, the Seahawks this fall are counting heavily on big production leaps from the past three draft classes.

But with the decisions Tuesday to waive Darboh and put Jones on the injured reserve list with a chronically sore knee, contributions from 2017 are withering. Both were third-rounders — Jones, from North Carolina, was the 102nd player taken; Darboh, from Michigan, was No. 106 — from whom much was expected.

Remaining contributors from the class include OL Ethan Pocic (second), DB Lano Hill (third) and WR David Moore (seventh), the latter out at least for the opener with a cracked shoulder bone.

By NFL actuarial tables, the results so far aren’t terrible, but neither are they the stuff of Super Bowl contenders, particularly with the payroll distended by having to cover the salaries of the game’s most expensive player, Russell Wilson, and most expensive linebacker, Bobby Wagner.

At least the Seahawks are thrilled they took Amadi, even if his “special stuff” may be inflated by the flatness of the surrounding territory.

“It’s busy, but it’s a blessing to be able to do several things at once,” Amadi said of his practice schedule including special teams. “I have to stay on top of my stuff,  just like school. I do homework here, then do more homework when I get home. I don’t have much free time. When my family comes to town, I still have to work. No time to be social.”

He doesn’t get everything right yet. Consider the fumbled punt return Saturday in Los Angeles in the win over the Chargers. He was lucky because the Seahawks recovered.

“The ball went above the lights, and I lost it,” he said. “It was like a high school environment when the lights are so low. When I saw it, it was too late — hit me in the right shoulder. I still have a picture of it in my head, and see it right before I go to sleep. I thought I was lined up perfectly.

Another mistake was his accounting of the Huskies-Ducks football rivalry.

Asked whether he thought the Ducks would lose by more than seven this year, he offered up some side-eye.

“Y’all are living in a fantasy world up here,” he said, grinning. “You gotta understand Washington lost to Oregon 17 years in a row.”

“Y’all did do that, my sophomore year,” he allowed. “You had two first-round receivers. Y’all don’t got that now.”

He admitted to another surprise.

“Y’all talk about he Huskies, but I don’t see too many people around the city wearing their gear,” he said. “I’ve seen more people wearing Wazzu stuff than U-Dub.”

I said I thought Seahawks players were told to avoid drive-through restaurants.

Another rookie mistake — putting himself in harm’s way off the field.