Former Huskies star LB Ben Burr-Kirven broke out in the Seahawks’ final fake game, a 17-15 win over Oakland. But backup QB Geno Smith may have a knee problem. 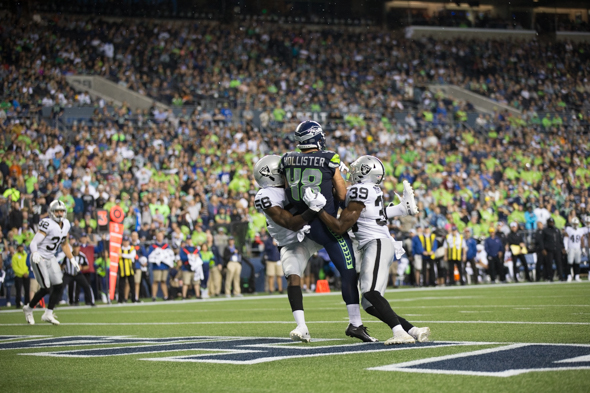 If there is such a thing as a last chance to make a good first impression, LB Ben Burr-Kervin patented the trick Thursday night at the Clink.

After an injury-hampered start to his Seahawks career, the former University of Washington All-America linebacker embraced a final chance, watering up the eyes of the Oakland Raiders as if he were tear gas.

In the fourth and final preseason game, the leading tackler in college football last year had 12 tackles, two for loss, a pass defensed and a sack. If he somehow doesn’t make the Seahawks roster, it seems highly likely that the Raiders would put in a claim on him.

“He had a huge game,” said coach Pete Carroll after the otherwise dreary 17-15 exhibition win (box). “He was making plays everywhere. It’s really important for him. He’s trying to make the club. He had a great opportunity to play all night long. He was up for it. It’s not like he’s unfamiliar with making a lot of tackles. It was his best outing for sure, and it was great to see it.

“He was really kind of bogged down a little bit early in his return. He could get back, but he wasn’t feeling really good. But tonight, he looked like he was back to full speed and flying.”

Before getting carried away with any results from the rain-soaked evening, keep in mind that the Raiders bothered to fly up for the game only 45 of their 90 players. The Seahawks rested 31 of their 90. Almost none who played were first-teamers.

Both teams wanted an extended look at the least among them, the youngest and newest, because the deadline cut down to the 53-man roster is 1 p.m. Saturday. Burr-Kirven, because of lost practice time and his size (6-0, 230 pounds), was on the roster bubble. He was a fifth-round draft choice, but needed a splash to secure his place.

“I thought I’d take my shot,” he said. “Every week, I get a little bit better. Practice helps, but you really need the live action because it’s hard to replicate.

Countering the BBK optimism were injuries to two players, backup QB Geno Smith and rookie SS Marquise Blair, who early on re-injured his back that kept him out of the previous game.

Smith was booked to start and play the first half, which he did well, completing four of seven passes for 107 yards, including touchdown passes of 39 yards to WR Terry Wright and 11 to TE Jacob Hollister, balls that could not have been thrown better by starter Russell Wilson.

But just before halftime, a Raiders rush dropped him in the backfield and a tackler rolled up on his right knee. Smith stayed down for a minute before walking to the sidelines and giving way to his rival for the backup job, Paxton Lynch.

Smith was on the sidelines for the second half, and in the locker room claimed he was OK.  But he did say an MRI was scheduled for Friday. He had a minor procedure on the knee two weeks earlier.

“It’s feeling good,” he said. “There was a little scare there. I’m still not back to full strength (from the surgery). So there are some things I have to strengthen there. But just to go out there and play, I felt OK.”

Nevertheless, the Seahawks may have a noteworthy decision to make, given how Lynch looked in the second half (one of seven passing for four yards and a near-interception in the red zone). Carroll said part of Lynch’s problem was a lack of protection from a third-string offensive line, but Lynch’s unhurried throws were dismal.

“We don’t know what (Smith’s condition) is going to be,” Carroll said. “We’re going to check it out. I’ll know more in the next couple days.”

If Smith’s MRI reveals a more serious problem, the Seahawks may be up for adding a quarterback cut from another team Saturday afternoon.

Another who didn’t advance his cause was LB Shaquem Griffin, who played on special teams but had no scrimmage snaps because of a sore knee that has bothered him for much of the preseason.

“It has persisted some, so we’ll see,” Carroll said. “I think we’re going to MRI him again, just to make sure we know what’s going on. It’s been a little bit different injury than a normal knee injury. He got hit on it. We thought bruised early on, but it just hasn’t gotten well fast enough for us.”

Jadeveon Clowney, the recalcitrant pass rusher of the Houston Texans, has the most of what Seattle has the least: Quicks to the opponent QB.

As Houston’s franchise player, he’s under a tag worth roughly $16 million. The acquiring team can’t sign him to a multi-year deal until next off-season. Even then, Clowney would want to be paid among the highest pass rushers in the NFL. The fit seems unlikely.

Besides, the Texans are said to be most interested in immediate help for the O-line, where Seattle is set, except for zero depth. Nothing to see here. For now.

WR DK Metcalf did not play Thursday, meaning he finished the preseason with one catch for eight yards. Slowed by minor knee surgery Aug. 20, his return been watched more closely in western Washington than a pod of resident orcas.

Pre-game, he was out running hard on long routes and catching throws from Wilson.

Carroll said Wednesday he wouldn’t guarantee Metcalf will start, but did suggest that the rookie was ready for a superhero role as befits his physique.

“He has referred to himself as Wolverine (the Marvel film character with regeneration powers), like he is going to bounce back,” Carroll said. “He’s remarkable. Really. He’s a very mature kid, very clear about the challenge of it. Very clear about his intentions, expectations. He’s counting on playing. He’s not even thinking about anything else.

His mentality is excellent. As good as it can be for a young kid. He just continues to kind of surprise us in all ways.”

Since training camp began, the Seahawks had five potential starters who were in some injury jeopardy for the opener Sept. 8 against Cincinnati. One who won’t make it is CB Kalan Reed. A neck injury that kept him out of last week’s game in Los Angeles was reported to be career-ending.

#Seahawks CB Kalan Reed suffered a neck injury that not only landed him on IR but is also likely career-ending, agent Harold Lewis tells me. Injuries to the 3rd and 4th vertebrae led to numbing after his final game and put him at serious risk if he plays again. A tough reality.

Reed, who joined the team during the season last year but didn’t play much,  was leading a field of four for the starting nickel cornerback job. But one among Akeem King, Jamar Taylor and rookie Ugo Amadi now figures to advance, unless the Seahawks decide to hire someone from the waiver wire Saturday.

The other injuries were to DE L.J. Collier, LG Mike Iupati, RT/TE George Fant and WR David Moore. Also, DT Jarran Reed must begin serving a six-game suspension for a domestic violence episode from 27 months ago.

Carroll said after the game that Iupati, Fant and Collier had chances to return for the opener. Moore is out longer with a cracked bone in his shoulder.

At a presser Wednesday, Carroll was optimistic that DE Ziggy Ansah, the free-agent signee replacing the traded Frank Clark as Seattle’s premier pass rusher, was getting close to the green light.

“He’s going to stay (at team headquarters) over the weekend and work through it and get one day of break and then come right back at it,’’ he said. “And then come back Monday and we’re going. We are counting on him making it through, until he can’t. That’s how we are looking at it.’’