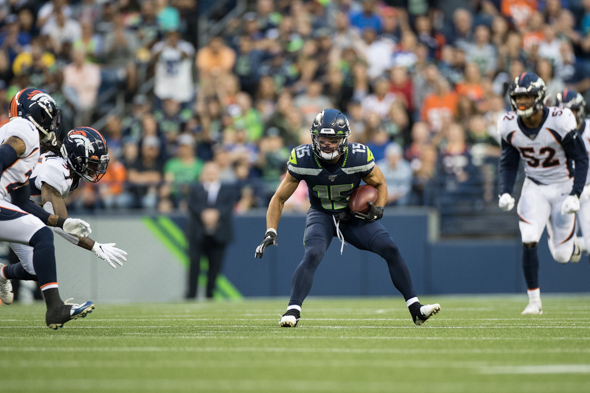 WR John Ursua may be the rookie with the biggest impact. / Drew McKenzie, Sportspress Northwest

If you have thrown a stick for a young Labrador retriever, then you know the exuberance of Pete Carroll in the first week of the NFL regular season. All things are possible. Joy and light abound. The world is written in exclamation points, underscores, italics and boldface.

Entering his 10th season in Seattle, he is fourth in wins among active coaches (Bill Belichick, Andy Reid, Mike Tomlin) and first in public enthusiasm. But if you have been watching for these 10 years, you know that.

Wednesday, amid the usual cavalcade of exultation and elusiveness before Sunday’s kickoff against Cincinnati (1 p.m. CBS), Carroll was asked why he was so excited about this team, even beyond the blockbuster acquisition Saturday of star DE Jadeveon Clowney.

He said something a little different than usual.

“Attitude,” he said. “These guys are making it happen. The energy and juice, the connected feeling I have with the leadership of this team — the captains (Bobby Wagner, Russell Wilson, Neiko Thorpe), Duane Brown, Tyler Lockett, Bradley McDougald; those guys we know so well.

“That is a real strength of ours. Knowing there’s going to be young guys involved, that makes you feel secure that messages will get passed.”

At face value, that sounds like typical opening-week hyperbole. But if you look back over Carroll’s tenure, you realize it means something more: Carroll in 2019 has no rival for the players’ attention.

No Marshawn Lynch. No Richard Sherman. No Michael Bennett. No Doug Baldwin.

In 2019, he has a collection of players — the fourth-youngest by average age in the NFL — who either have bought in, finding little reason to question his authority or wisdom, or are too young to say anything.

No disparagement is intended for the departed players who challenged Carroll. They were indisputably vital in Seattle’s success and encouraged by Carroll to be independent thinkers, for which he deserves credit. But mercurial talents and head coaches almost always clash, on every team in any sport.

No one addressed the subject better than baseball manager Casey Stengel.

“The secret of successful managing,” he said, “is to keep the five guys who hate you away from the four guys who haven’t made up their minds.”

Regarding Carroll’s enthusiasm for the group, it appears to resemble the 2012 team. As to how much that matters in a season is anyone’s guess. But free of holdouts, pouts and nationally televised insubordinations,  the observance of order allows Carroll, the staff and the front office to concentrate purely on football matters.

That may have had a bit to do with the success by GM John Schneider in purloining Clowney from the Houston Texans. Schneider was done with the draft, free agency and the large contracts of Wilson and Wagner, and didn’t have to give side-eyes to distractions. He could concentrate exclusively on burgling the Texans by slithering up the downspout and crawling across the porch roof to the open bedroom window and whispering, “Dude, let’s go!”

The pairing of Clowney with another top-shelf pass rusher, free-agent signee Ziggy Ansah, was one of the great moves of the Carroll era, and had him nearly giggling.

“To have Ziggy and Jadeveon, that’s different,” he said. “That’s a unique matchup. (It’s) where we were (in 2013) with Chris Clemons, or later with (Bennett and Cliff Avril), guys who could really do something on the edge, flying up-field.

“These guys have the ability to do that. We got to bring it to life. It’s exciting, the prospects of what it could be like. We got to do a great job of teaching them properly so they don’t do too much too soon.”

For Sunday, doing too much too soon likely is the biggest worry. Clowney and Ansah have only this week to practice. They’re up against a team coming off a 4-12 season that finally cost Marvin Lewis his job after 16 seasons of mediocrity.

The Bengals hired a guy they hope is the next Sean McVay. Zac Taylor, 36, worked the past two seasons under the Los Angeles Rams coach. Taylor, in his first head coaching job at any level, brought in 15 new assistants. So there is almost zero meaningful film of the staff’s work to study.

So, potential for lots of mayhem. As Carroll put it, “It’s not just assessments on what they’re doing, we have to figure out what we’re doing too.”

Despite the implied threat of contrariness, let us move forward with some orderly observations:

Rookies with the most immediate impact — Fourth-round CB Ugo Amadi and seventh-round WR John Ursua. Amadi impressed on special teams and has a shot at playing time as the slot corner, a position without known starter. Ursua has a shot to do what Doug Baldwin did best — help bail Wilson out of trouble.

Rookies with the least immediate impact — First-round DE L.J. Collier and second-round WR DK Metcalf. Due to injuries, both missed substantial time in the crucial first training camp. It’s hard to play catch up in the first year, both have better players ahead of them and both were drafted higher than their NFL talent ceilings.

Most valuable non-Ziggy Ansah free agent signing — PK Jason Myers not only is consistent, his field goal range to 55 yards will salvage numerous drives for an offense that means to shorten the game by reducing possessions.

Least valuable free agent signing — LG Mike Iupati, 32. A good career is at its end.  He’s too banged up to be a regular.

Veteran who needs to step up on offense — OL Ethan Pocic. Between Iupati and RG D.J. Fluker, plenty of important snaps will be available for a second-round underachiever, who has consistently won praise in training camp and preseason for his improvement.

Veteran who needs to step up on defense — FS Tedric Thompson. He doesn’t have to be Earl Thomas. He has to be much better than Tedric Thompson of the first two years.

Season prediction — 9-7. Before the acquisition of Clowney, I was prepared to say 7-9 because, in the absence of traded Frank Clark and suspended (for six games) DT Jarran  Reed, the Seahawks wouldn’t get enough pressure on QBs to bail out a weak secondary. But Clowney is a two-game improvement. Expect another slow start, perhaps 2-4, and another fiery December.

The stick gets thrown again.