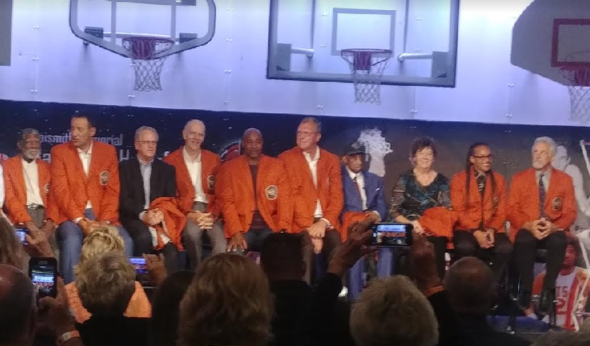 From disparate worlds, the rivals spent 12 years in each other’s grills, farm kid and Harlem kid meeting regularly in the low post in Seattle and Los Angeles. Friday night they meet again in more hospitable and salutary circumstances.

Abdul-Jabbar will join two other Hall of Famers, Lenny Wilkens and Wayne Embry, in presenting Sikma for enshrinement as part of the 2019 class for the Naismith Memorial Basketball Hall of Fame in the town where the game was invented.

Sikma chose Wilkens because he was the coach of the SuperSonics when he moved Sikma in his second season from power forward to center, a maneuver crucial in directing the Sonics to the 1979 NBA championship. Sikma chose Embry, a longtime NBA player and executive, because he lobbied on behalf of “Banger” with the secretive, 18-member panel that annually considers candidates for enshrinement.

And Sikma chose Abdul-Jabbar because he was the premier figure in a class of hoops warriors vanishing in the modern NBA like a mirage — powerful giants astride the industry, before the three-point line and analytics made for sissyball.

“You look at Kareem’s legacy, and he’s at the top of the list,” Sikma said Thursday afternoon as the weekend of events began. “It was such a battle with so many good centers in the league at the same time.”

Sikma nodded across the room at the Hall of Fame toward fellow enshrinee Vlade Divac, the former Lakers and Kings star.

“He’s the 15th Hall of Fame big man I played against,” he said, pride obvious. Abdul-Jabbar was chief among them.

“My recurring memory is seeing number 33 in purple right in front of me, with his right hand extended,” he said. “You just battled.

“There’s a number of guys here in the hall that I went against, and now stand beside.”

The implausibility of a skinny white kid from an NAIA school who had neither hops nor quicks standing with the regal and extraordinary Abdul-Jabbar bends the sporting mind. Jack Sikma helped the Sonics to the 1978 NBA Finals and then to a championship in 1979. He is guarded in a Coliseum game by Darryl Dawkins. / David Eskenazi Collection

No one is suggesting equality with Kareem here. But for Sikma to rate a place on the top shelf among his contemporaries, it took a similar kind of data-sleuthing from writers —  particularly this one from ESPN.com’s Seattle-based Kevin Pelton — that allowed former Mariners star Edgar Martinez to have his candidacy elevated to the Baseball Hall of Fame.

In a sentence, the analytics showed Sikma’s career from 1977 to 1991 in Seattle and Milwaukee revealed a high level of consistency, efficiency and durability that was superior to many already in the hall.

He also won a championship, became the first big man to lead the NBA in free throw shooting and conjured some hoops innovation too.

Sikma helped begin an NBA trend, mostly during his final years in Milwaukee, of freeing space inside by moving a good-shooting big man outside to face the basket and fire. It led to the increased emphasis on three-point shooting that has, for good or ill, consumed the pro game.

“As rules changed that opened up the court, spacing was a new way to play, which meant you had to shoot from distance,” he said. “I don’t know what place I have in that whole process, but the concept was there in my last few years in Milwaukee.”

He learned his shot-making as a forward, only 5-foot-10 as a high school sophomore. He didn’t lose any of his touch as he zoomed to 6-8 as a junior. By the time he entered Illinois Wesleyan in nearby Bloomington, he and his coaches developed an inside-pivot move that swept the defender’s hands away, clearing the way to step back and launch a jumper (well, a set shot) from high behind his head that was unblockable.

“I was a skinny, decent-shooting big guy,” he said. “It was a move that fit my skill. It was experiment after my freshman season, when my college coach sat down and said, ‘Jack, you gotta be more effective in the post if you want to take the next step.’

“Some coaches poo-poo it because you’re catching the ball in one spot and stepping back three feet. That’s not a concept, right? But I was comfortable with the pivot, and worked on a higher release point. Today there would be a big advantage because (of rules changes) that, when you face up the defender, he can’t put his hands on you.”

The shot distinguished Sikma’s career, in the manner of Kareem’s Skyhook, or Olajuwon’s Dream Shake or McHale’s Up and Under. Unfortunately, it just took longer for the basketball world to understand what it had in Sikma, despite seven All-Star appearances.

“One if the great things about being a late bloomer is you focus on just the next thing,” he said. “Don’t get ahead of yourself.”

Sikma’s game may have been ahead of his time. But at 63, he has every right to say basketball was way behind time in recognizing his value. That mistake ends Friday night here.

Former Sonics coach/player Paul Westphal in the Class of 2019

Westphal was part of one of the most controversial trades in Seattle history, a straight-up swap of All-Star guards, Westphal for a then-impetuous Dennis Johnson, MVP of the 1979 NBA Finals. Fans were outraged with coach Lenny Wilkens, who termed Johnson “a cancer.” Then Westphal broke a bone in his foot and never again played for the Sonics.

He also was fired in 2001 as Sonics coach when he struggled to manage stars Gary Payton and Vin Baker.

Asked to summarize his saga in Seattle, Westphal offered a wan smile and said, “Disappointing.”

He was candid about the problems with 6-11 forward Baker, a major trade acquisition who busted, and later was treated for alcoholism.

“Things didn’t go the way we thought at the time,” he said. “You don’t want anything to sound like excuses, but I broke my foot. Then as coach, Vin Baker turned into an alcoholic  — after a lockout.”

Westphal said he had an argument with then-Commissioner David Stern, who insisted that all coaches begin wearing a microphone to let fans become more engaged with the game.

“I said, ‘Can we talk about this?’ He said, ‘No!'” Westphal said. “It came at a time when we were, to put it mildly, extremely concerned about Vin’s drinking. This is no great secret, but there were bottles stashed in the rest room at halftime.

“Sometimes (coaches) have to talk about things that we don’t want on a microphone. This was inappropriate. There was media coverage negative to him, and Stern backed off.  I won the skirmish but I don’t think I necessarily won the war. I’m not his friend.”

If he wants to be around more non-friends of Stern, he’s welcome back in Seattle.

“I love Seattle,” he said. “The basketball community up there is second to none. It’s insane that they don’t have  a team. It seems impossible when you think about how much they love the Sonics.

“One of the biggest disappointments of my career is that things never worked out there.”