A long night of unpleasant surprises for Huskies

A two-hour, 39-minute rain delay was nothing compared to season-long discomfort the Huskies will feel after a home loss to Cal that exposed multiple weaknesses. 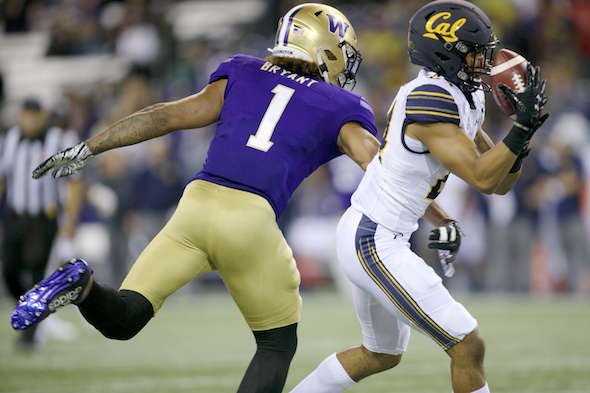 Husky Stadium, the scene of one of the most unusual Washington football games in its storied history, emptied out early Sunday morning not unlike some university nightclub or frat party at closing time. Senses were deadened. Hangovers were coming.

Those that braved the elements — and fewer than half of the announced 66,327 paid attendance stuck around following an agonizing 2-hour, 39-minute lightning delay — were left to mull a few stark developments while searching for their cars in the darkness.

More surprising than the prolonged battering handed out by Mother Nature was the scoreboard outcome: The heavily favored Huskies lost to the California Golden Bears 20-19 (box) on a last-second field goal. They lost to ex-UW assistant coach Justin Wilcox’s team for the second consecutive year. And they lost at home, for just the second time in 22 outings.

Washington’s weaknesses were exposed for all to see. Replacing nine defensive starters from 2018 has left Peterson searching for new playmakers. None stepped forward against Cal.

“Guys were out of position,” Petersen concluded of the defensive effort. “From the naked eye, it was more tackles than we’ve missed in a while.”

The Huskies receiving corps, as it did the season before, disappeared once more against a topflight secondary. Again, playmakers were lacking when needed most. Three guys dropped Jacob Eason passes delivered on the mark. Andre Baccellia hauled in a third-quarter ball in the Cal end zone but couldn’t get a foot down in bounds, leaving the UW to settle for Henry’s 22-yard field goal and a 13-10 lead.

Eason was not nearly as sharp as he was in his debut last week against Eastern Washington, a lesser opponent. While completing 18 of 30 passes for 162 yards, the Georgia transfer threw an interception to Cal’s Camryn Bynum, blunting a second-quarter scoring drive, and he fumbled the ball away in the same period after getting hit from behind by elite LB Evan Weaver, who led all tacklers with 18.

“We just couldn’t finish,” summed up C Nick Harris, showing no after-effects of a leg injury that knocked him out of the opener.

On this night, the Huskies and Bears barely got started when it seemed as if something resembling Hurricane Dorian consumed the city. No Sharpies were needed to verify the surprising storm’s course. It made a direct hit on Seattle.

Just 11 plays, amounting to an offensive series for each team and no scores, were run  following the 7 p.m. kickoff before the ferocious weather rolled in and the stadium was cleared. Lightning flashed all around the metal facility, though there were no direct hits. Fans huddled tightly in concourse areas. Monsoon rain pelted the field.

UW players spent the next 159 minutes holed up in their locker room. They watched other games on TV. They stretched. They resumed play at 10:30 p.m.

“We were talking with each other and relaxing,” defensive back Myles Bryant said. “We were still doing stuff to get ready. We wanted to come back out with an edge.”

Twenty-three minutes into the restart and early in the second quarter, Henry gave the Huskies a 3-0 lead with a 36-yard field goal. The drive stalled when Eason left the field for a play after a short run and backup Jacob Sirmon was sacked. It was 10:53 p.m.

Two possessions later, the UW went up 10-0 on Salvon Ahmed’s 21-yard scoring burst over the right side. He juked Cal’s Ashtyn Davis at the line of scrimmage and raced in untouched. Ahmed led all rushers with 119 yards on 21 carries. The night was still young — it was 11:13 p.m.

However, Cal settled in and put together its first scoring drive, getting on the board with Thomas’ 23-yard field goal to pull within 10-3. The teams broke for a 15-minute halftime, not really in need of another rest. It was 11:37 p.m.

The Huskies defense looked vulnerable at times. The front line was physically pushed off the ball as Cal piled up 192 yards rushing, 80 by starting RB Christopher Brown and 72 by backup Marcel Dancy. UW linebackers Brandon Wellington and Joe Tryon were badly fooled on running plays, whiffing on tackles.

Cal took the second-half kickoff and appeared more energized, coming up with an equalizing score on Dancy’s 23-yard run. The speedy back broke tackles by Benning Potoa’e and Cameron Williams to make it 10-10. The clock struck midnight.

Washington settled for a Henry field goal when Baccellia couldn’t stay in bounds on his end-zone catch, but Cal responded with a Dancy TD run from eight yards as the third quarter pulled to a close. It was 12:26 a.m. and Cal led 17-13.

Early in the fourth quarter, the Huskies squandered a big opportunity to take control. On fourth-and-1 at the Cal 2, they went for it with a power package. As Eason called the signals, sophomore TE Corey Luciano flinched and drew a false-start penalty. Mental mistake. Drive over. The UW settled for another Henry field goal and still trailed at 17-16. It was 12:44 a.m.

“That changed things right there,” Petersen conceded. “We were going to go for it.”

Thereafter, the late-game kickoff settled things. Henry, who reputation suffered mightily after he missed a potential game-winner the year before at Oregon, coolly stepped up and curled his 49-yarder inside the right upright to put the Huskies up 19-17 and set off a brief on-field celebration. But there were still over two minutes left. It was 1:04 a.m.

Cal was up to the challenge. Sophomore quarterback Chase Garbers calmly moved his team 74 yards in nine plays, exploiting UW weaknesses. In consecutive plays, he drew a pass-interference call on Huskies sophomore CB Kyler Gordon at the 30 and hit WR Kekoa Crawford with a 27-yard pass over the middle to the Huskies 3.

A slight breeze wafted through the stadium as the Bears’ Thomas took two steps to set up, swung his arms back and forth and easily split the uprights for the game-winning points.

The Huskies ran two plays, the clock ran out and the home team couldn’t get off the field quick enough, looking a little stunned. Senior LT Trey Adams was the last to go up the tunnel, walking slowly with his head down and his jersey rolled halfway up his chest.

Fast approaching was 2 a.m. Adams’ team had survived the storm, not the football battle.