Neither pass-blocking nor run-blocking well, the Seahawks’ offensive line, which didn’t play together much in preseason, didn’t look ready for the opener. 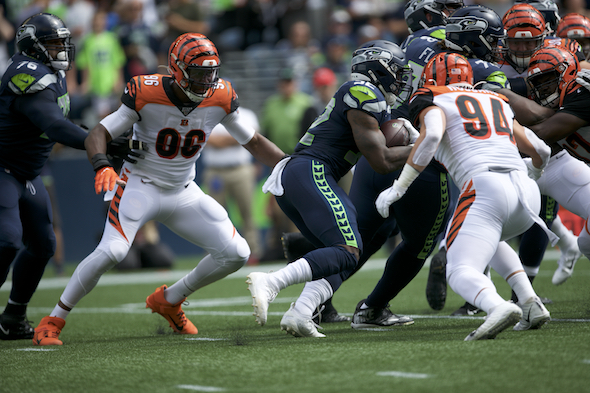 After quarterback and linebacker, the one position unit the Seahawks were all in on for 2019 was the offensive line. But after the first game Sunday, the Seahawks might want to claw back a chip or two.

Neither in run-blocking nor pass protection did the line distinguish itself, helping account for a modest 233 yards of total offense and the biggest disappointment in the unexpectedly tight 21-20 win over the Cincinnati Bengals, 4-12 last season.

Coach Pete Carroll skipped his usual supportive qualifiers and was, for him, direct.

“It was not as good as we expected,” he said in his Monday afternoon post-mortem with reporters. “We thought we’d come out more efficient than that in run game and pass protection.

“The run game would have helped us with play action. (The Bengals) did a nice job. They  totally planned on us (running) and did really good job with their coaching. (The line play) wasn’t as good as we hoped, and we’ll do quite a bit better.”

Earlier in his weekly Monday show on ESPN 710 radio, he used the word “arrogant” to describe the Seattle playcalling once it was discovered that the Bengals front four (and often five), led by Pro Bowl DT Geno Atkins, were even more stout than advertised.  The Seahawks rushed 25 times for 72 yards, 21 coming on RB Chris Carson’s run inside the final three minutes that helped keep the ball away from the Bengals until it was too late.

“We thought we would be able to knock them off the rock,’’ Carroll  said, and were “a little arrogant with our stuff at them.

“We didn’t get to all the stuff we wanted to do.”

The style worked well enough last season to lead the NFL in rushing, and made the offense one of the most efficient. But in the second quarter, C Justin Britt was shoved back and collided with TE Will Dissly, injuring both. Dissly left the game with a sore knee. Britt left and returned quickly after Ethan Pocic moved over from left guard for a play.

“We got knocked off on the play into the backfield more than we were counting on, and the penetration messed up the timing,” Carroll said. “It wasn’t one guy. It was different guys that had issues with some pretty intricate, finesse things things we do.

“Good attack by them. They were able to get an edge on us.”

“We didn’t get a lot of plays in the preseason, but it’s no excuse. We’re a veteran group and we know what to expect,” he said. “We have to be able to come out and play to a certain level. We didn’t start off that way.

“In pass pro, we’ve got to keep Russ clean – bottom line. So I’ll be better, we’ll be better as a group.”

Carroll said LG Mike Iupati, who played one play Sunday in Britt’s absence, will practice this week after missing most of the preseason.

Despite having been thrown away by two teams in the past year for various misbehaviors, WR Antonio Brown was looked at by the Seahawks before the New England Patriots Saturday swooped up the NFL free-agent desperado.

“We are involved in everything,’’ Carroll said. “I’ve been telling you that for a long time and we seriously mean we are trying to know what’s going on with every opportunity to get better.

“If we missed one of those, we messed up. So we did know what was going on in that one.’’

The Seahawks have a shortage of veteran receivers, and Brown’s talent would be a game-changer. But his actions with the Steelers and Raiders were so disruptive that each club unhooked from him.

The Patriots signed him to a one-year deal for $9 million, with incentives that could make the total $15 million. He didn’t play in the Patriots’ season-opening 33-3 win over Pittsburgh Sunday night.

Carroll said due diligence was done to find the whole story on Brown.

“We just weighed in on the situation to know exactly what was going on,” he said. “That’s what we needed to know, and why wouldn’t you? He’s a great player; see what’s going on. Not everything is always what it seems.

“You’ve got to check into stuff and figure out what’s going on. I have confidence in our guys and (general manager John Schneider), and our coaches, that we can figure those things out and see what’s best. I don’t mind getting real close to the edge of it and figuring it out.”