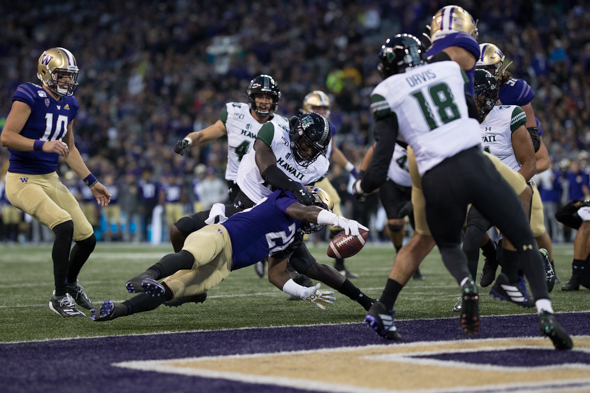 RB Richard Newton stretches the ball across the goal line in the fourth quarter against Hawaii. / Drew McKenzie, Sportspress Northwest

The disturbance in the purple force was palpable. The Huskies a week ago lost a conference game at home to underdog Cal, thanks to a combination of dropped passes, missed tackles and dubious play-calling that combined to scream “overrated” at eardrum-assault levels.

It was one of the worst losses in Chris Petersen’s time as Huskies coach. Yes, the Husky Stadium circumstances were awkward, a bad-weather delay on a 7 p.m. start that lasted so long Petersen admitted thinking about finishing the game in the Dempsey Indoor practice facility.

It would have fulfilled his fondest fantasy about playing a game without the annoyance of fans and media. But it would have roiled the several thousand Washington fans who for some reason endured the night to its dubious end.

Petersen would never admit that the mass dwindling of the home crowd hurt Washington more than Cal. Instead, he relied on what coaches always say in these situations: Lightning strikes both teams equally.

The upset loss suddenly made Saturday’s ho-hum, non-conference game against a Mountain West Conference team into a big deal.

Hawaii had already beaten at home two Pac-12 teams, Oregon State and Arizona, and flew to Seattle looking for a three-peat against the haughty Power 5 conference, which would have been a first in Hawaii’s history and the latest embarrassment for a conference that has misplaced its big-boy pants.

In order to thwart the humiliation, the Huskies took no chances.

They unloaded the heavy ordnance from the git-go.

Tangible evidence of acme of the Cal debacle’s pissed-offedness.

Perfect coach-speak. And it was true. It’s going to take all season to overcome the consequences of the Cal defeat, so the need for agitation against Hawaii was nil. The need for efficiency was paramount.

“I feel like we have a chance to have a really great team this year,” Bryant said. “We made some critical mistakes (against Cal) — if we hadn’t, the game would have been different.

“This week, we locked in on the details for our offense. That showed today.”

This time it was only the Rainbow Warriors seeking shelter.

The burst revealed the potency of Eason-to-Bryant — 115 yards on five catches. It was the game’s highest individual yardage total and a sign of connection.

“It’s been great,” said Eason. “Look at the guy. He’s a specimen. He’s a great possession receiver, but also a tight end who can make plays with the ball in his hands. Glad he’s on my team. Today he had his opportunity.”

Maybe because at 6-6 and 230 pounds, he’s almost equal in size, but Eason has something of a bromance with tight ends.

“For as long as I can remember,” he said. “In high school (at Lake Stevens), the tight end was my guy. I lived with my tight end in Georgia. Hunter’s now a big play-maker, and he’s my friend.

“I try to follow my reads and progressions, but it’s nice having a big body to throw to.”

At 6-2 and 239 pounds, junior Bryant is almost certifiable at this stage as the Huskies’ most (only?) reliable receiver. A very good Cal secondary exposed the shortcomings with the older wideouts such as seniors Aaron Fuller and Andre Baccellia.

Petersen has younger guys in the pipeline, such as Puka Nacua, the highly regarded freshman from Provo, Utah, whose career-first reception was a 28-yard reach-back in the end zone for the final TD in the 21-0 blitz. But freshmen are predictably unreliable. Perhaps Petersen’s hardest offensive task this season is to find receivers to complement Bryant.

Eason completed 18 passes to seven receivers in his 25 throws that generated 262 yards. The receivers cut back their drops to three from the horrendous six against Cal, a dubious feat that dumbfounded Petersen.

“I don’t know where that came from,” he said.

Bryant said the group seemed to calm down against Hawaii.

“We kinda took a step back, trying not to make key plays all the time,” he said. “We have so many explosive players at so many positions, the plays can come at any time.”

The first explosion Saturday to Bryant was a masterpiece, partly because he was so open.

“We had good play action on it,” Petersen said. “We were attacking the backers and safeties on that one. When you got a guy wide open like that in the middle of the field, it is usually because of some good play action or busted coverage, which I don’t think it was.”

Once he caught the ball around the 30-yard line, Bryant had time to look up at the stadium’s live-video screen to scan for hostiles.

“I was actually looking to see how far (the defender) was behind me,” he said. “I felt good about the space, then the corner came up on me at the last minute.”

Apart from his receiving skills, Bryant has become more adept in his third year at blocking, in which he takes pride.

“I’m a much better blocker than when I came in,” he said. “That’s what makes me happy, when I get a good block; being a part of working with the O-line and the running backs.”

The great tradition of Washington tight ends appears to have a worthy heir. It would help if he didn’t have to carry the offense. But if asked, he will crew the entire ship.