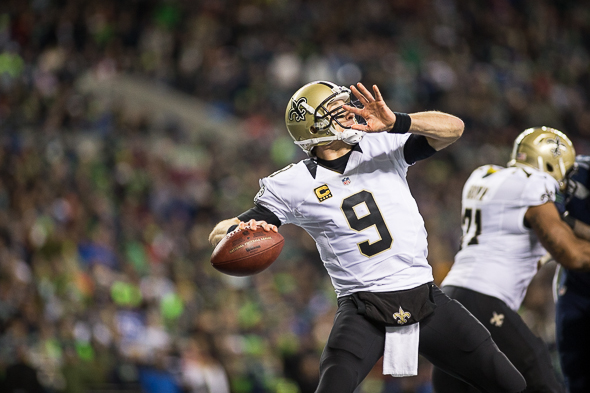 Since 2004, New Orleans all-world QB Drew Brees has missed four games, three because the Saints had clinched their playoff berth and didn’t need to risk injury. In 2015, a shoulder injury kept him out of week 3.

His second injury absence will be Sunday at the Clink, when the 2-0 Seahawks at 1:25 p.m. host the 1-1 Saints led by backup QB Teddy Bridgewater, who looked close to terrible in a 27-9 loss to the Rams Sunday in Los Angeles.

The thumb on Brees’s right hand, smashed against the hand of DT Aaron Donald in the first quarter, will require surgery that will keep him out six weeks.

The episode happened not long after Steelers QB Ben Roethlisberger was removed from the Seahawks game at halftime in Pittsburgh with an elbow injury. Monday morning the Steelers announced that he will be lost for the season after surgery to repair the elbow. Reasonable speculation is that the career of Roethlisberger, 37, is over. He was eight of 15 passing in the first half for 75 yards and one sack, moving like a guy with 15 years and serious hard miles in the league.

The coincidence of injuries to NFL greats happening in consecutive games against the Seahawks is yet more proof of the randomness of the cosmos. But no 12 who saw Seahawks QB Russell Wilson’s awkward, turf-ripping slide Sunday dares offer a snicker, much less a chortle, at the misfortune of others. Bad juju.

Best to rely on the axiom of the late Seahawks coach Chuck Knox: “In the NFL, it’s not always who you play, it’s when you play ’em.”

Which offers zero solace to the Saints, who must face the Seahawks defense renewed with with the first appearance of pass-rush DE Ziggy Ansah. The much-hyped free agent signee from Detroit likely will start Sunday after missing all of training camp, preseason and the first two games recovering from shoulder surgery, plus a minor groin strain.

“We have a real good chance to see Ziggy this week,” coach Pete Carroll said Monday morning on his weekly radio show on ESPN 710 radio. “We’re counting on him to have a big week. He’s practicing with a real clear intent to play.

“He’s going to be a factor. He’s been exciting in practice — he’s a big dude, same size as (Jadeveon) Clowney, but different players. I think they’re going to complement one another.”

Ansah joins a defense, Seattle’s forecasted weak link this season, on an uptick, having held the Steelers at home on a hot, humid day to 180 yards passing and 81 yards rushing. Granted, Roethlisberger was hurting and second-year backup Mason Rudolph isn’t ready for prime time, but two turnovers and 3-for-11 on third downs were positive stats for Carroll.

“I thought we did a lot of really good things — the first half was a really good half of football,” he said, referring to the Steelers’ first four drives of five, seven, 33 and 22 yards, the fourth producing a short-field touchdown after a Seattle fumble. “I liked our defense. We played really good ball. There were a couple of running-game mistakes,  and we didn’t get pressure on Ben, but we felt like we were around him and closed it down. He was having troubles.

“We’re growing, we’re figuring it out. I can’t wait for this week. I can’t wait to get going again. We’re gaining some traction.”

“There’s about six plays we had (hitting Pittsburgh receivers) that reminds me of a couple years back when we played zone and we were killing it,” he said. “It’s exciting.”

The one position change at free safety, in which FS Lano Hill replaced injured Tedric Thompson (hamstring) in the starting lineup, seemed to work well, except for Hill’s burn on a flea-flicker that went for 46 yards.

“He did fine,” Carroll said. “The one flea flicker, I wish didn’t happen. Other than that, he did pretty good. He was out there running and hitting making it competitive.”

Meanwhile in LA, Bridgewater, the highest-paid backup in the NFL at $7.25 million for one year, was 17 of 30 passing for 165 yards with no picks or touchdowns and a passer rating of 72.2. He also cost the Saints a third-round draft pick in a trade.
Bridgewater, 26, has been seen as a potential permanent replacement for Brees, 40, despite the fact that he lost two full seasons in Minnesota to a serious knee injury.

Saints coach Sean Payton laid off much of Bridgewater’s modest production to poor offensive line play and penalties. The Saints had 11 penalties for 87 yards. Probably true, but there’s no dispute that the Saints, in Bridgewater’s first start, have to fly back to the West Coast to play in the NFL’s most annoying house against two of the game’s premier pass rushers playing together for the first time.

No wonder Carroll was excited.