Thiel: Why Payton thinks Saints are OK at QB 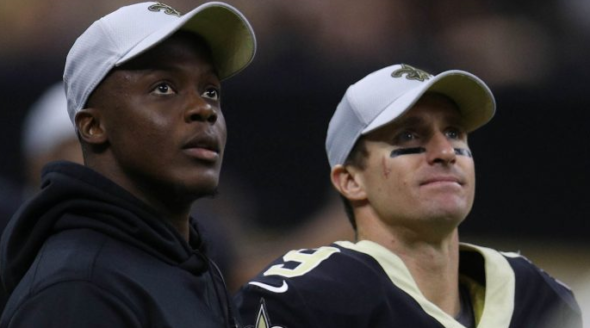 Teddy Bridgewater takes over for injured Drew Brees Sunday at the Clink. / NFL.com

For fans tee-heeing over the alleged good fortune in the Seahawks catching the Saints Sunday without QB Drew Brees almost for the first time since New Orleans was still property of France, here’s some advice: Stifle yourselves.

The last time his backup, Teddy Bridgewater, met the Seahawks, he out-played Russell Wilson. His team, the Minnesota Vikings, should have won the 2016 playoff game.

The fact that the Seahawks prevailed, 10-9, was due to a miss of the game-winning, chip-shot field goal by Blair Walsh in the final seconds. That, and the fact that the outdoor game in Minneapolis was colder than a stare from Don Vito Corleone, helps obscure the fact that Bridgewater was a Pro Bowl quarterback in 2015 after being a first-round draft choice of the Vikings in 2014.

So despite his mediocre numbers Sunday in Los Angeles after Brees left the Rams game in the first quarter with an injured thumb in a 27-9 loss, Bridgewater, 26, is the highest-paid backup in the NFL for a reason: Saints coach Sean Payton sees him as a long-term successor to Brees, 40.

And if Payton gives a thumbs-up to a guy when Brees goes thumb-down, it has noteworthy meaning across the NFL.

“I like his arm strength; I think he’s got really, really good leadership skills,” Payton told reporters Wednesday on a Seattle-media conference call. “He’s someone who knows how to win. He’s got a poise about him. He’s good with the rest of this group.”

Yet Payton wouldn’t commit to starting Bridgewater Sunday (1:25 p.m., CBS) against the Seahawks.

He insisted that all-purpose backup Taysom Hill, 29, who also plays tight end, wide receiver and on four special teams, was a viable option, even though he has thrown seven passes in his NFL career.

Yes, Hill threw for nearly 7,000 yards in his college tenure at BYU (2012-16). But to suggest he will make his NFL QB debut on the road at the audio hell of the Clink is preposterous.

It is classic Payton, always in pursuit of the smallest edge, up to and including disinformation.

“We’ve got two guys we’re comfortable with,” he said. “They’ve played and are experienced in our system. Both guys have endeared themselves to teammates, and are looked up to. Both are getting work this week. We’ll see how it unfolds on Sunday.

“Taysom has a live arm, and a quick release. He’s in the QB meeting rooms. He wears a lot of different hats.”

If we were to believe Payton, the rest of us should be wearing dunce caps.

“Well, it may be,” he said. “What’s more obvious is me not answering that question, at a Wednesday press conference with (Seattle) media calling.”

As you might guess, Seahawks coach Pete Carroll is not quite ready to bite on the pump-fake.

“I would think that Teddy goes, just by the structure that they’ve been in,” he said. “Taysom Hill’s a nice football player and I haven’t seen him play quarterback that much, but I know he’s on the roster like that.”

The propaganda is understandable. The absence of Brees, in his 19th season and a 12-time Pro Bowl selection, is a four-alarm fire for a team that reached the NFC Championship in January, and is among the favorites to do so again. This is an emergency, so Payton is like a battalion chief looking for all the entrances and exits in the burning building.

“Our job as coaches is to put a game plan in place to give our players the best chance to win,” he said. “I don’t know if any one person has to step up, but the group, by and large, does.”

But no one has command of the game as does Brees, on the Saints roster or anywhere in the NFL outside of Boston.

“We start the game plan, and by Wednesday, he’s spitting out everything like he’s had it for four or five days,” Payton said. “Teddy and Taysom have been around Drew, and are accustomed to the expectations of what it takes to play quarterback in this league.”

When last Seattle saw him, in the coldest game in the history of the Vikings, Bridgewater completed 17 of 24 passes for 146 yards, no TDs nor picks, for a quarterback rating of 86.5. Wilson was 13 of 26 with a TD and a pick for 63.3 rating.

But those brutal conditions were a trifle compared to Bridgewater’s long-term trauma starting eight months later at a preseason practice — a non-contact tear of his ACL and other ligaments that led to structural damage to his left knee. Many speculated the injury was so severe he might lose his leg, and seemed at the time at least career-ending.

In an astonishing recovery, Bridgewater was back to team workouts in a year, and in November 2017 was activated to be the backup behind Case Keenum. Late in the season, he made a token appearance, generating a resounding ovation around the NFL.

Bridgewater signed in free agency a deal with the New York Jets, who subsequently traded him to the Saints for 2018. Payton gave him a one-year deal worth $7.25 million. More than three years after his injury, Bridgewater returns Sunday for the first time to a starting lineup.

Regarding his last meet-up with Bridgewater, Seahawks LB Bobby Wagner claims no memory of him — for good reason.

“I think that game was like, negative two degrees,” he said. “When I came out and I saw a dude sneeze and it turned into ice before it hit his lip. That was the biggest element I was going to face.”

“He was in the Pro Bowl the year (before) he got hurt,” he said. “There’s no sleeping on him. We learned our lesson last week when the backup quarterback (the Steelers’ Mason Rudolph) came in and made some noise. We know this is the NFL. Everyone’s good.

“Teddy’s a quality guy, been in this league a while, won some games and took the team to the playoffs. He’s pretty good.”

With RB Alvin Kamara, WR Michael Thomas, and a good defense, the Saints don’t need the Taysom Hill fake. If Bridgewater, with a week of practice with the first unit, justifies Payton’s faith in him, the Seahawks may long for the lesser trauma of a sub-zero day on Lake Wobegon.