Among NFL QBs, the casualty rate so far is high. In Seattle, Russell Wilson’s health and enthusiasm remain undiminished. It may be his biggest feat of all. 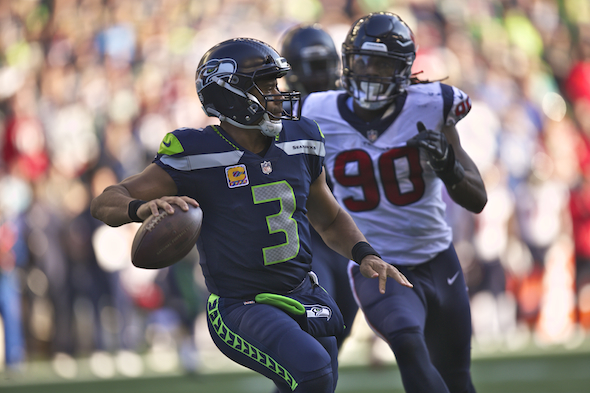 Over eight seasons, Russell Wilson has managed to keep guys like Jadeveon Clowney, here with the Texans,  from knocking him out of games. / Drew Sellers, Sportspress Northwest

After the injury downings of icons Drew Brees and Ben Roethlisberger, which followed the surprise retirement of the Colts’ Andrew Luck, quarterback longevity is the raging topic of the early NFL season. The casualty rate across the league is so high that two former Washington State quarterbacks, Gardner Minshew and Luke Falk, have risen to starting jobs with the Jacksonville Jaguars and New York Jets.

If current Cougars starter Anthony Gordon plays it shrewdly, he’ll be the Patriots quarterback next year after the retirements of Tom Brady and Bill Belichick, because WSU coach Mike Leach will obviously ascend to the New England job.

The truth remains that for all the Kevlar-enhanced bubble wrap that rulesmakers have glued around the position, QB vulnerability remains the NFL’s scariest element week to week. If you don’t believe it, check the shirt you were wearing Sunday when Seahawks QB Russell Wilson made his awkward slide into and under the Heinz Field turf in Pittsburgh. You know, the shirt upon which you spit up.

Wilson was fine, fine enough to win NFC offensive player of the week for his work in the 28-26 win over the Steelers (29-of-35 for 300 yards, with three touchdowns). Nevertheless, digestive hygiene was a momentary health crisis across the Northwest.

Because the Seahawks play the Brees-free Saints Sunday at the Clink, Wilson, 30, at his weekly presser Thursday at Seahawks headquarters was asked a variety of questions about perhaps the most remarkable feat of his career — he hasn’t missed a game in eight seasons since starting as a rookie in 2012.

In order to appreciate his answers and the stability he has brought to the position — it was a big part of the Seahawks’ decision in the off-season to make him the NFL’s highest-paid player — it’s instructive to compare the Seattle situation (and a few others elsewhere) to its polar opposite. 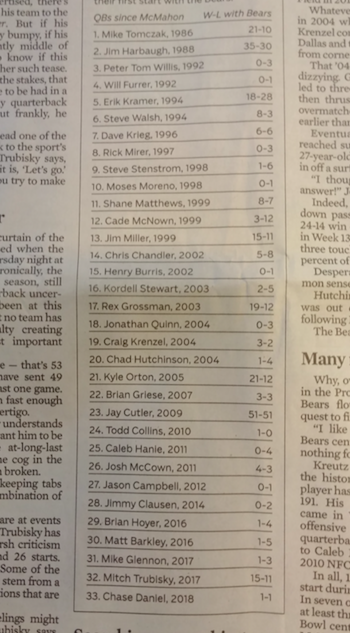 Since Jim McMahon played his last in 1988 for the Chicago Bears — a team that’s been around for the most recent 99 of the NFL’s 100 years and won their only Super Bowl following the 1985 season — they have had 33 quarterbacks start over the subsequent 30 years. Since the Super Bowl era began 53 years ago, the Bears have had 49 starters.

During a recent change of planes at O’Hare, I picked up a Chicago Tribune newspaper (look it up, kids). Its NFL preview section led with a story headlined, Endless Search for ‘The Guy’.

The story included the complete roll call of starters. It was remarkable enough to publish here. The list includes five starters of a single game, the inevitable seasons for Cade McNown and Josh McCown (similar-sounding backups who may have started once for every NFL team, plus the Mariners), plus two former Seahawks (Dave Krieg and Rick Mirer) and  former Washington signal caller Chris Chandler.

The most wins, 51, were by the breathtakingly mediocre Jay Cutler, and the second-most, 35, was by Jim Harbaugh, also mediocre but subsequently hugely entertaining as coach of the San Francisco 49ers.

The Seahawks’ history is also replete with mutts (Kelly Stouffer and Dan McGwire, anyone?), just not in the past eight years, which has been the best eight in club history.

“I’ve got to make sure that I’m changing the tires and making sure I’m doing everything I can possible, so the car is ready to roll,” he said.  “You invest a lot into that because really, it’s my car. It’s my engine.

“You have to be able to engineer your body, your mind, and your spirit to be ready to play a long season. I spend hours and hours training my body, and making sure that I’m able to move better. I’m able to really recover faster in every way. I think that’s a big, critical part of that.”

Wilson calls the work “prehab,” to help him avoid rehab following an injury. None of it, of course, can forestall the sort of random bad luck that Brees had Sunday when his throwing hand slammed into the onrushing meathook of Rams DT Aaron Donald. The torn ligament in Brees’s thumb was repaired surgically and will keep him out at least six weeks.

But Wilson does nearly everything he can to keep himself out of harm’s way. He’s careful to slide before tacklers reach him, he curls up tightly when the sack is inevitable, and the sideline exit after a scramble is a staple. But downfield blocking, which he did Sunday on RB Rashaad Penny’s 37-yard touchdown run, drew the double-arched-eyebrow scorn of offensive coordinator Brian Schottenheimer.

“For some reason, he thinks he’s a fullback when he gets out there in space,” he said. We’ve talked a little bit about that.”

Wilson also benefits from playing for a well-funded franchise that runs a disciplined, effective operation. In contrast, say, to the Detroit Lions.

In an si.com feature this week on  Calvin Johnson, the former star receiver disclosed that part of his decision to retire relatively healthy at 30 was the burden of playing for a crappy outfit, which did not win a playoff game in his nine seasons.

Johnson offered an anecdote about QB Jon Kitna, the Lincoln-Tacoma and Central Washington grad who played 14 seasons in the NFL, including 1997-2000 with the Seahawks, where he made 33 starts. In Johnson’s second season in Detroit, he was in a team meeting with Kitna, the starting quarterback.

“He left the meeting room one day, and he told the coaches and the whole team that we’re not gonna win a game if we go into the season with (this) system,’ Johnson said. “Somebody should have listened. Because we were 0–16 after that.”

Through his own diligence and the franchise’s steady progress, Wilson, unlike Luck, also has undiminished enthusiasm to continue. Because he uses so many shopworn platitudes, it’s easy to be skeptical of him. And he could have a change of heart at any time.

But as the QB casualty rate grows around the NFL, here’s his statement this week:

“I love the game of football,” he said. “I love winning. I love being on the field. I love being available. I love competing with my teammates and doing whatever it takes to play.”

Remember in school when no one liked the kid who had perfect attendance? Pro football is different.