Thiel: First quarter was all Huskies needed at BYU

BYU celebrated its national championship 35 years ago at Washington’s expense. The ’19 Huskies didn’t care, because they have Jacob Eason, and little else mattered in Provo. 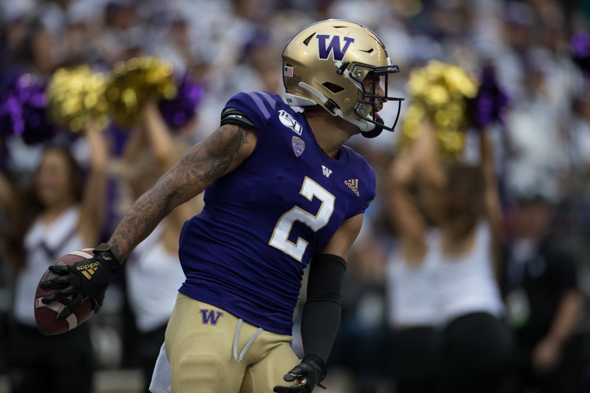 It’s tempting to suggest that Brigham Young University picked a dubious opponent against which to celebrate the anniversary of their one and only national championship. That controversial 1984 title came at the expense of the University of Washington, which finished second in the polls despite playing a much stronger schedule than the Cougars.

It seems BYU purposely timed their salute to the Huskies’ game Saturday at LaVell Edwards Stadium in Provo, Utah, just to be annoying. They reaped the whirlwind.

But really, since the Seattle grievance was 35 years ago, well before all the players and probably half the coaching staffs were born, the commemoration likely was of scant influence.

As the 45-19 triumph (box) attested, the Huskies were superior without history-induced injustice. And hey, since UW beat BYU 35-7 a year ago at Husky Stadium, it wasn’t as if the Cougars were blindsided by the heft and speed of the purple fist.

Just as in the previous game when UW jumped out to a 35-0 lead, it was 21-3 Saturday before the fans had a chance to unbutton the top button on their white dress shirts.

A pair of 75-yard touchdown drives and a 69-yard return of a fumble by senior LB Brandon Wellington settled matters before the game was 13 minutes old.

“Especially on the road, it’s critically important that you get out to a decent start so you can quiet the crowd down a little bit,” Chris Petersen said after his 50th win as Washington’s coach. “We couldn’t have started any better.”

Giant first quarters seem to be a thing for the Huskies, at least against the non-conference foes. The 3-1 seasonal start includes a 63-3 advantage in the opening period.

“Let’s not broadcast that,” Petersen said, laughing. “I don’t want other teams dialed into our game plan.”

The plan was altered slightly when starting RB Salvon Ahmed stayed back in Seattle with a previously undisclosed leg injury. But RBs Sean McGrew (110 yards) and Richard Newton (80)  stepped up nearly flawlessly.

There was no change in plan for QB Jacob Eason, who seems to take a step toward NFL readiness with each college game.

He hit 10 of his first 11 passes on the way to 24 of 28 for 290 yards, and touchdown throws of 17 yards to Newton, 17 to WR Aaron Fuller and 35 to WR Andre Bacciella. His only noteworthy error came in the third quarter when he threw his fastball into triple coverage and was intercepted.

“I thought Jacob was really, really sharp,” Petersen said. “Probably that last pass, he got a little too greedy. He saw things pretty well out there today.”

His decision-making was close to perfect, changing the calls at the line, and even later, once BYU’s defense revealed itself each play.

“A lot of our run/passes are a combination,” Petersen said. “He reads it post-snap. If they step up hard against the run, he looks to pull it out and throw it. If not, he’ll hand it off. He did a nice job of mixing that up.”

A big beneficiary was Fuller, the oft-maligned senior wideout who tied his career high with eight receptions (against BYU last year) for 91 yards. The TD pass was a laser in the end zone on a crossing route when he knew he would be blasted, but the 5-11, 188-pounder took the hit, held on and stared down his foe.

Early in the third quarter, and moments after Baccellia’s TD, Fuller took a punt and went untouched for an 88-yard score to put Washington up 38-12, putting to rest any throb of hope BYU fans had after the 24-12 halftime deficit.

“It was nice to get Aaron loose,” Petersen said. “We knew that was coming. He can do some things with the ball. He’s just got to get some help and some space. He finally got it.”

The Huskies defense gave up 356 yards, but benefited from three turnovers and a knee injury to leading rusher Ty’Son Williams, who exited at halftime with 28 yards on six carries. DL Benning Potoa’e reached QB Zach Wilson for two sacks.

But the Huskies, who came in to the game with the fewest penalties in the Pac-12, had 10 for 89 yards, including three pass interference penalties, two on CB Keith Taylor, and a bunch of offsides calls.

“I thought it was poor on us,” Petersen said. “We had five offsides penalties. That’s unacceptable. That was on me. (BYU’s) cadence was a bit different, and our guys were not locked in, not paying attention to what was going on.

“We talked about it, but we didn’t work on it enough. That was frustrating.”

Dominance elsewhere reduced the penalties to a mere nuisance. But that will be among several boxes Petersen will want to check for improvement as Huskies’ schedule finally gets serious after three lesser foes and the aggravating home loss to Cal.

UW hosts Saturday the conference’s mystery team, USC. The Trojans somehow lost two weeks ago to BYU, 30-27, yet Friday night beat No. 10 Utah 30-23 behind third-string senior QB Matt Fink, who threw for 351 yards and three touchdowns in the first significant action of his career.

Fink replaced freshman Kedon Slovis, who was concussed on the game’s second play.  The season’s original starter, freshman J.T. Daniels, is out for the season with a knee injury.

Whoever starts for the Trojans figures to get to earful from a sellout crowd. That audio may be second in annoyance only to the video-game passing of Eason.