The Seahawks have had odd games before, but none started with the coach getting hurt pre-game. Then things grew weirder, a 33-27 loss to the Saints the weirdest of all. 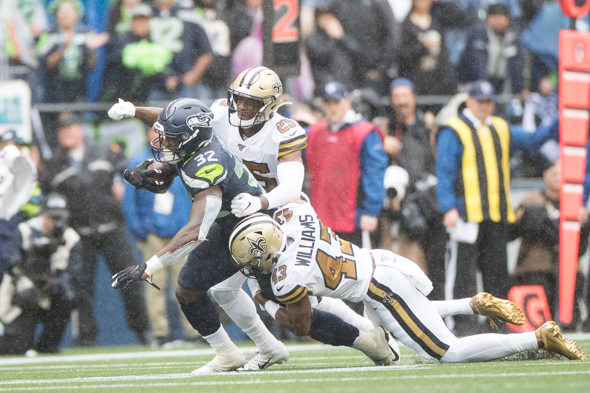 Seahawks RB Chris Carson is about to be struck from behind by CB Eli Apple (25), leading to a fumble that the Saints turned into a scoop-and-score touchdown by SS Vonn Bell. / Drew McKenzie, Sportspress Northwest

Omens are for the superstitious. But foreshadowing? Yeah, we rational folks can run with that. So let’s propose an NFL maxim that says: Anytime your head coach has to take stitches after the pre-game warm-up, it’s going to be a bizarrely foul day.

Otherwise, there is no explanation for why the Seahawks were so astonishingly inept in nearly every phase of Sunday’s game, including coaching decisions.

The New Orleans Saints certainly had a bit to do with stimulating the opportunity — like making sure injured QB Drew Brees’s replacement, Teddy Bridgewater, never held the ball beyond the count of “one-mississippi . . . ” . But the Saints often were more spectators than perpetrators in the 33-27 Seattle implosion (box) that left a Clink full house and a region stunned. It was the first home loss in September in the Pete Carroll era.

The Saints were not a party to the Seahawks lining up illegally for a field goal attempt, which failed but was erased by the penalty, and subsequently turned into a New Orleans touchdown. The Saints were not responsible for injured and ineligible Tedric Thompson running onto the field to celebrate a play, costing the Seahawks 15 yards, helping thwart a drive that went scoreless. The Saints had nothing to do with Carroll, packing two timeouts, mismanaging the clock in the final 30 seconds of the first half, wasting a 54-yard completion by failing to leave enough time to attempt a field goal.

There’s more, but you get the drift.

“I had a particularly bad day,” said Carroll, whose plus for candor didn’t out-weigh the minuses of his decision-making. “There were too many I had to make some things happen, and I tried too hard at times.”

And about that bright red gash on your nose?

“I got smacked in the nose with the football,” he said. “Last play of warmups.

Pete Carroll got hit in the nose with a football that required stitches #SEAvsNO #seahawks pic.twitter.com/72aRK8PHow

As can be seen in the video, rookie LB Cody Barton was tossing a ball toward a staffer as Carroll began jogging toward the pre-game locker room. Given subsequent events, it might be the most significant pass of the day.

Carroll didn’t elaborate on whether the blow impacted his thinking. But it seemed a viable question, at least regarding the episode just before halftime. Down 20-7 with the ball at the Seattle 21, 29 seconds to go and two timeouts, QB Russell Wilson had a nine-yard completion to TE Nick Vannett. But no timeout was called.

In the hurry-up offense, Wilson with 10 seconds left heaved a bomb that rookie WR DK Metcalf somehow pulled down between two defenders the the Saints’ 16-yard line. It was exactly the kind of play for which he was hired. But the clock ran out before the Seahawks called a timeout to set up for a field goal attempt.

“Russ came up with some magic and made a great play with DK,” he said. “If we knew that was going to happen, I would have called time out earlier. But, it didn’t work.

“That was just kind of how this thing went. It was one of those days.”

It was one of a myriad of mistakes that were self-imposed. As Carroll put it,  “So many things happened that (we) just hurt ourselves. Even the coach got hurt.”

Down 27-7 entering the fourth quarter, the Seahawks put on something of a rally. But even Wilson’s stupendous resolve couldn’t get them over the mountain of crap they had constructed.

As DT Quinton Jefferson put it, “We didn’t deserve to win with all those mistakes.”

Even the defense, which held the stripped-down Saints playbook to 177 yards passing and 88 yards rushing — the Seahawks had no sacks and two QB hits — nevertheless missed numerous tackles, open-field and between the tackles.

“That was very uncharacteristic of us,” said LB K.J. Wright. “We might have five of those in a (normal) game.”

But this game was driven into the perverse by two plays, one entirely unexpected and another numbingly predictable.

The Saints’ first score came off of Seattle’s normally reliable special teams. A low, 38-yard punt from Michael Dickson was returned 53 yards by Deonte Harris for a touchdown past a coverage team that looked bewildered.

Their second score came when RB Chris Carson, after a 23-yard gain that was his longest of the day, had the ball punched from his grasp, for the third time in three games. This one turned into the worst outcome, a 33-yard scoop-and-score by SS Vonn Bell.

Carson’s contributions have been considerable (53 yards in 15 carries Sunday), but he just doesn’t seem to keep ball tight against his body.

“He’s been a marvelous player on this team, and he has to fix this,” Carroll said.
“I can’t fix it for him, but we’ll help him.”

Carson knows he’s now the target for every ball-hawk in the league.

“If you see somebody fumble, of course they’re going to try and go after that,” he said. “I just need to keep my elbow tucked, and that’s it.”

Yet it turned out to be the Seahawks’ only turnover. The Saints offense had only 50 plays, nine possessions and two TD scoring drives, of 58 and 75 yards. They averaged 5.3 yards per play to Seattle’s 6.8. But the Seahawks’ inordinate number of mistakes more than made up for the statistical difference.

Still, in the fourth quarter of most any game Wilson plays, there was a chance.

For another couple of mistakes, it turned out.

Inside 10 minutes, the Seahawks were on their own 28 facing fourth-and-1 on a drive they needed to keep alive. Instead of a run or short pass, Wilson dropped back for a heave of more than 40 yards that was well past WR Malik Turner.

Too make matters worse, Carroll surprisingly challenged the play, seeking pass interference. Contact was minimal, the call upon review stood, and the Seahawks were dunned a timeout that might have proven important.

The ball went over on downs and the Saints took nine plays to travel the 28 yards for a touchdown to put the game out of reach.

“They had everybody on the line of scrimmage, and it’s a check out of the play we were running,” Carroll said. “(The long pass) was a very aggressive thought in how we do it . . . we tried to take advantage and score a touchdown right there.”

Instead, possession was lost, as was the game.

As usual Wilson did his part — 32 completions in a career-high 50 attempts for 406 yards and two TDs, plus another two rushing (51 yards in seven carries).

But with 13 games left, it remains to be seen whether he can carry 45 teammates and the coaching staff on his back by himself. Particularly if his duties include telling his coach to duck. 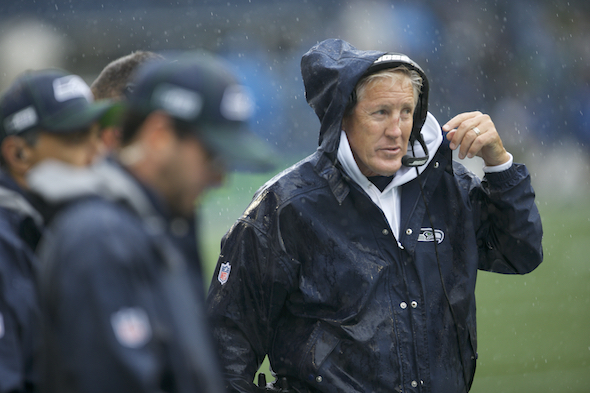