Once the Trojans eased up on the Air Raid and became Tailback U again, they scared Washington. But two big plays nearly back to back saved the Huskies. 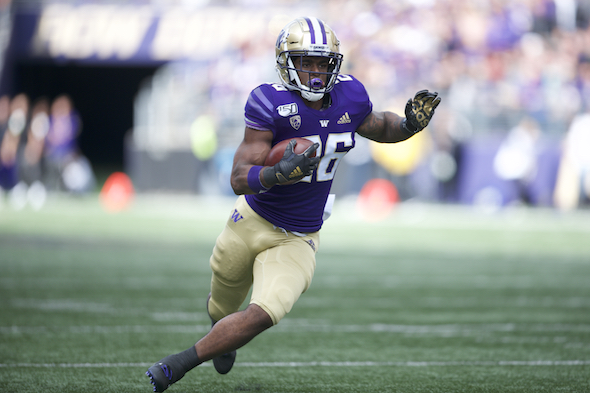 Despite all the controversies and travail surrounding USC, the most scandal-ridden university in the country (non-sports as well as sports), it is still Trojans football. Even if they were now supposedly running an Air Raid offense with a third-string quarterback, they were still 3-1 and ranked 21st after a surprising win last week over 10th-ranked Utah.

And they had won five of their past six games at Husky Stadium, including the most recent visit in 2016, when they upset fourth-ranked Washington. Sure enough Saturday, the one-time Tailback U put up 212 rushing yards against the No. 17-ranked Huskies.

Two large plays, made by best friends within a minute of one another, rendered the Trojans renaissance inert, returning coach Clay Helton to the hot seat, which has been a plumbing fixture in Los Angeles since Pete Carroll left 10 years ago.

Huskies fans would like to suggest beating USC 28-14 (box) foreshadows something great. But without a goal-line interception by junior CB Elijah Molden, followed moments later in the third quarter by a stunning 89-yard touchdown run by junior RB Salvon Ahmed, the Trojans likely would have been hailed as rising darlings by those in the national media who cling to the notion of USC as the West Coast’s lone team.

The Huskies missed enough tackles, made enough penalties and mistakes, and wrapped around an average output from QB Jacob Eason, were ripe for an upset loss. Especially to a team led by Mike Fink, a fifth-year senior starting his first career game, thanks to injuries to USC’s top two QBs.

Halfway through the third quarter with UW ahead 20-7 and USC stuck at its own 11-yard line, the Trojans exploded.

A 60-yard run by RB Stephen Carr, an eight-yard run by RB Markese Stepp and two short completions had USC at the UW 10-yard line. But on second-and-four, Fink tried to find star WR Michael Pittman in the end zone. He didn’t see Molden underneath the route.

“That saved us,” coach Chris Petersen said. “That was a 14-point swing. He picked it off and two plays later, Ahmed goes the distance. That was the sequence of the game.”

Molden, probably this year’s best secondary player, had yet to have a pick this season, despite numerous chances, and was getting irked.

“I just kept telling myself that it was coming,”  he said. “Especially after a game like BYU (last week in Provo, Utah), where I had a ton of targets and a ton of opportunities. I  had a feeling this game was going to be the one.”

His best pal on the team, Ahmed, had no chances at BYU. He stayed home from the 45-19 win nursing a leg injury.

“It was definitely weird,” he said. “I was at home with my family watching.

“It was big to bounce back from not playing. Those (injuries) are things you just gotta let go. My teammates had my back.”

Ahmed paid them back.

In the shadow of his own goal post, Eason hit TE Cade Otton for seven yards, then handed off to Ahmed.

“Is it normally a three- or four-yard run? Absolutely,” said offensive coordinator Bush Hamdan. “It’s an inside-hitting play which the defense overplayed, and he went outside with it.

“He gives you the spark you need to turn a short run into going to the other side of the field. One (defender)  fits the gap the wrong way, it’s a game-changer.”

Ahmed quickly burst free of the line and made it into an 80-yard footrace with three Trojans behind him. Given the caliber of athlete USC recruits, it was a remarkable thing to watch Ahmed hold his lead for the length of the field.

Not only was it a career-long for Ahmed, it was the fifth-longest run from scrimmage in UW history, and longest since Napoleon Kaufman went 91 yards in 1994.

‘It was probably my longest,” Ahmed said, grinning. “I was tired.”

After a two-point conversion that made it 28-7, the Huskies appeared in command. But after USC scored on the next series, the Huskies decided to add some drama.

After a short punt, Washington had a first down at midfield early in the fourth quarter and wanted to try a complicated gimmick play they worked on all week.

The play started with a fake toss sweep to the right, then Eason handed off to TE Hunter Bryant going hard left. He was supposed to flip the ball to WR Aaron Fuller sweeping right, who apparently was planning to throw deep.

But USC blitzed, knocked the ball from Bryant and recovered the fumble. Palms went to foreheads across Husky Nation.

“That’s on me,” Petersen said. “We wanted to be aggressive in that situation. We may have been a little too aggressive.”

Said Hamdan: “We were trying to put the game away. It was the wrong play against the wrong defense. They brought an overload and we tried some trickeration that didn’t work.

“We’re not going to sit back. Sometimes it doesn’t go your way.”

Fortunately for the Huskies, USC was penalized 15 yards on the turnover for too much celebration, then was guilty two plays later of offensive pass interference. The drive fizzled, as did USC for the rest of the game.

It must say something about the Huskies that they can do an Evel Knievel-level crash-and-burn stunt and still beat USC by 14 points. But perhaps it says more about the Trojans, who needed to abandon the Air Raid against Washington a whole lot earlier. Then again, Mike Leach has been told that for six years, and it has yet to sink in.