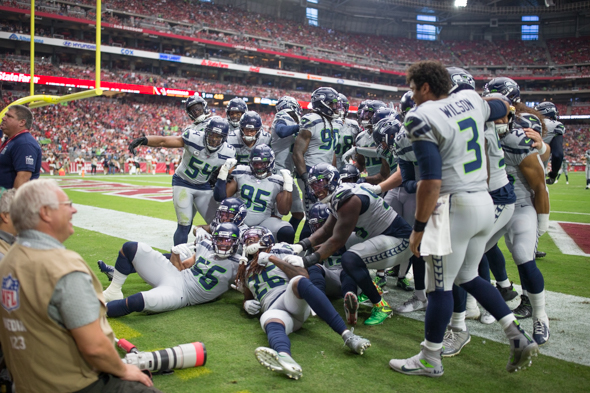 The Seahawks celebrated the pick-six by Jadeveon Clowney (90) by mugging for the cameras. / Drew McKenzie, Sportspress Northwest

On multiple levels, the loss at home last week to the New Orleans Saints minus Drew Brees was among the worst in the Seahawks tenure of coach Pete Carroll. Bad as was the coach getting hit in the nose with an errant pre-game football,  the outcome’s blow to the collective ego was worse.

“We got hit in the mouth,” said LB Mychal Kendricks. “It opened our eyes.”

The punches sent an alert that was team-wide: Don’t half-ass anything in the NFL.

“I thought this was a really complete game for us,” Carroll said of the 27-10 triumph (box) over the 0-3-1 Arizona Cardinals, who, as early as they are in a transformation under a new coach quarterback, were good enough to beat last’s week Seahawks.

Not the Seahawks Sunday in Glendale. The house of malign happenings was instead benign.

Chief protagonist was RB Chris Carson, who buried his fumble problems along with the Cardinals. He had 104 yards on 22 carries and another 41 yards on four carries, most done in the ruthless manner of 2018, when he led the Seahawks in welts given.

“He really made a statement about our style of play,” Carroll said. “Riding on his shoulders was really obvious today. I was really fired up for him.

“He’s a stud player, great competitor. He’s got style and toughness. We like to think of him as an example of the way we want to play. There were some freaky things that happened (on the fumbles). I was convinced Chris was going to put it away, and he did.”

The Seahawks next play the division-nemesis Los Angeles Rams. They do it on Thursday, at the Clink, where the Rams have to travel after being stunned Sunday at the Coliseum by Tampa Bay, 55-40, despite 517 yards passing by QB Jared Goff.

The travel on a short week after a shocker does not bode well for the Rams, now 3-1, as are the Seahawks.

“We’ll be cranked up for Thursday night,” Carroll said. “Looking forward to it.”

To beat the Rams, the Seahawks need to hold the kind of game control they held over the Cardinals, who moved the ball reasonably well between the 20s. The Seahawks countered by checking all the boxes they left unchecked against the Saints: Start with a lead, pressure the opposing passer into errors, make no turnovers or critical mistakes, and shorten the afternoon with a reliable running game led by Carson, without reliance on QB Russell Wilson to go Harry Potter every other play.

That way, no one needs to make any fourth-down decisions that lack a certain amount of rationality.

The acme of Seahawks control came in the fourth quarter, following Arizona rookie QB Kyler Murray’s best moments Sunday, an eight-play, 80-yard TD drive that closed the score to 20-10 and sent a ripple of discomfort through the thousands of 12s in attendance.

Despite starting the drive with a weird delay of game penalty, the Seahawks took the Cardinals on a remorseless grind through the next eight minutes, using a whopping 15 plays to go 75 yards. Carson carried seven times, one erased by penalty. The drive included a difficult third-down catch by TE Luke Willson, a free agent re-signed this week after Nick Vannett was traded to Pittsburgh for a fifth-round draft choice.

Even though it was RB C.J. Prosise who did the honors from nine yards out with 2:13 left, it was Carson’s clock-munching that put a big grin on the face of Carroll, who loves eight-minute, fourth-quarter drives like Labradors love tennis balls. 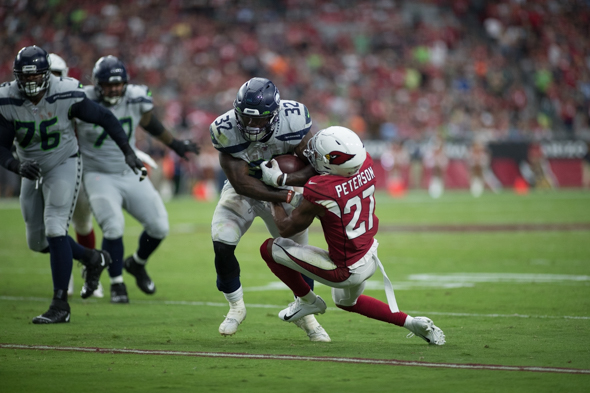 “I thought the whole thing worked out great,” he said. “The last drive was an extraordinary statement. It was exactly what we hoped to do — eat the clock up, score, and leave them not enough time.”

Carroll was nearly as happy with the defense, starting with the first big splash of the infant Seattle career of DE Jadeveon Clowney. In the first quarter, he leaped and stuck a meaty paw into a Murray pass behind the line of scrimmage for his first career interception, returning it 27 yards for a touchdown and and a 10-0 lead.

“A phenomenal athletic play, then staying inbounds,” he said. “That was awesome for him to get the pick-six.”

In his fourth pro game, Murray showed flashes of the early-day Wilson, particularly in his nimble evasiveness. He ran four times for 27 yards, completed 22 of 32 passes for 241 yard and was sacked four times in the debut of an Air Raid offense against a Carroll team.

“We probably missed four sacks because Murray’s such a special player,” he said. “You could see he’s a really fine athlete, and a pain in the future.

“But their offense threw for 240. That’s keeping him under control.”

Control. That’s what the Seahawks had none of against the Saints — who Sunday beat the Cowboys 12-10 in New Orleans — and nearly all of against Arizona.

Control will be necessary against the Rams. All they have to do this week is find a way to hit themselves in the mouth.