Under a new law, athletes at California colleges can get income for use of their likenesses. But not until 2023, which allows UW’s Petersen time to pay attention. 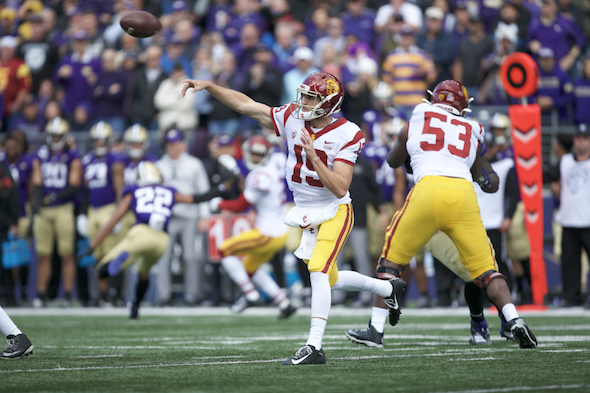 Imagine in a few years when USC comes to Husky Stadium able to pay its players OVER the table. / Drew Sellers, Sportspress Northwest

News Monday that the four California schools in the Pac-12 Conference were given legal permission to allow their football players in the future to receive outside income, which is not allowed for Washington players, did not muss a single one of coach Chris Petersen tightly coiffed hairs.

He has a football game to win Saturday, fools.

Predictably, Petersen wouldn’t deviate from his bland game-week patter to discuss how the conference’s most important state decided to go rogue on the NCAA, the anti-labor cartel that helps undercut American workplace principles in order to make wealthy its executives and football and men’s basketball coaches.

California Gov. Gavin Newsom Monday signed into law the right of his state’s college athletes to earn endorsement deals and sign with agents, just like any other students whose names might help companies sell products.

“Every single student in the university can market their name, image and likeness; they can go and get a YouTube channel, and they can monetize that,” Newsom told the New York Times. “The only group that can’t are athletes. Why is that?”

It’s because for more than a century, the NCAA has put a virtual corral around athletes called amateurism, an obstruction that no longer exists anywhere in the world. But here in the first-world USA, we have the capacity to go third world when it suits us, as it does with big-time college sports.

The corral just came down in California. Granted, the law’s implementation isn’t scheduled until 2023, which explains why Petersen wasn’t ordering everyone on campus to get on horseback and round up the strays.

But consider that Petersen now is recruiting for the class of 2020. Any player who chooses a California school and stays until his senior year can get income for his services. Change is closer than Petersen thinks.

But he isn’t oblivious to the fact the law is a clear and present danger to his profession, particularly if other state legislatures, like Washington’s, follow California’s lead.

“I mean, they got to get it figured out,” he said. “You got to have some rules to play by. I don’t know. I don’t have anything to do with this. They’re not asking me for advice on any of this stuff.

“So I just try to coach the guys, recruit the guys with the rules they give us.”

Petersen’s cop-out is understandable. It’s unlikely that he or any of his contemporaries would clear their throats in support of any boat-rocking reform, not when football coaches are the highest-paid employees in 39 of the 50 states, including Washington. There’s no status quo like the status quo in college sports, where for more than a century the periodic eruption of reformers gets distracted by shiny objects such as bowl games and basketball brackets.

In Petersen’s place, the Pac-12 office stepped in, issuing a statement Monday full of tut-tuts and tarnations, delivered with a harrumph:

Responding in a word: No.

Big-time college sports IS professional, with the exception of no pay for some of its employees.

Regarding unintended consequences, there are many already: the sex-abuse scandals at Michigan State and Penn State, the academic fraud at North Carolina and many other schools, the recent admissions-fraud scandals at several schools including USC, the FBI raids on men’s basketball programs for illegal payments to players . . . I could go on, but we don’t have time to take all of your requested favorites. Or were the examples cited intended consequences of big-time sports?

Regarding state laws that conflict with national rules, the solution is easy. Change the national rules. The NCAA is a trade association, not the old Soviet army.

Regarding blurring the lines for California’s national recruiting, there’s no blurring. The new law’s a helluva help. As one former California resident likes to say, always compete. Let the other states tear down their corrals.

Regarding de-funding Olympic (read: non-revenue) sports in college, the choice is strictly up to the colleges. Washington can pay Petersen $1 million less and fund two Olympic sports. Petersen is unlikely to starve. And as long as Alabama pays $4 million less to Nick Saban and funds eight sports, it’s fair.

College sports as an industry is reported to have grossed $14 billion in revenues in 2018, yet the new law does not seek to re-direct one dime toward players, only to let them make outside income off their work. But the NCAA is probably going to sue anyway, on the stupendously novel grounds that they need to keep their players broke-ass to survive. Save me a spot in the courtroom’s front row for that.

At least California was kind enough to give the NCAA four years to figure out reform for itself. If it doesn’t, Stanford, Cal, USC and UCLA will acquire all the best 18-year-old football and men’s basketball players in America.