Coach Pete Carroll’s conservative approach on a fourth-down call blew up on him, just as higher-risk calls did in the loss to the Saints. “Fatal optimism” is tricky. 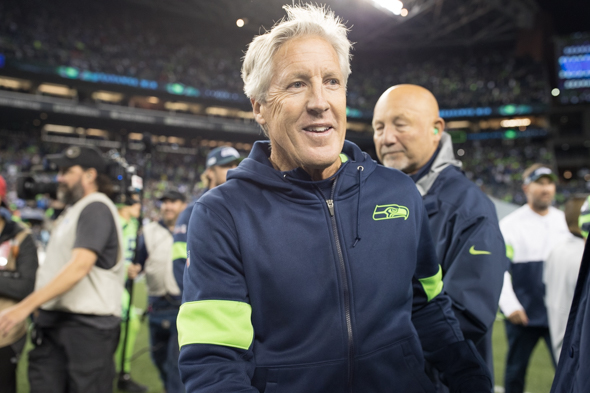 A side benefit for Pete Carroll on Greg Zuerlein’s missed field goal that re-ignited the Seahawks season Thursday was that it relegated a fan favorite, debating the coach’s judgments on third and fourth downs, to also-ran status. The 30-29 outcome couldn’t have been more narrow, but the narrative couldn’t have changed more completely.

That doesn’t mean the circumstance isn’t worth reviewing, because Carroll is secure enough to admit publicly he has impulse “issues,” the polite term favored by mental health counselors.

“When you’re fatally optimistic, it’s hard to think you’re not going to make it,” he said Friday on his weekly radio show on ESPN 710. “That’s what I have to battle against. I wouldn’t call it demons, but there are issues going on there.

“Without other considerations, my gut feeling is always to go for it. That’s what I’m fighting, and have to deal with my own issues.”

That might be an NFL first, a coach self-identifying publicly that he’s too positive for the good of himself and his team.

But in one instance Thursday, he executed a nifty self-check, undoubtedly pleasing his therapist. Carroll walked back his impulse to go for it on fourth-and-1 at the Rams 30-yard line and chose to attempt a field goal.

Except the decision blew up into nearly an outcome-changing sequence that, for a national TV audience, would have evoked the Play That Shall Not Be Uttered.

The Seahawks were up 14-6 with 1:38 remaining in the first half when RB Chris Carson was stoned for no gain at third-and-one. A subsequent field goal would have made for a two-score lead. But Jason Myers missed from 48 yards.

Rejuvenated, the Rams took over at the 38 and covered 62 yards in eight plays, abetted by a QB-roughing call on DE Ziggy Ansah. A nine-yard TD pass to Cooper Kupp cut the Seattle lead to 14-13 at the half, stunning the crowd into a mass murmur.

Asked what things he relies on in making such decisions, Carroll was amused.

“I don’t have a clue,” he said, laughing. “No, really, I try to take into account of everything, then go from my gut.

“In this game in particular, I wanted to do my part to play this as a championship game. Meaning you’re counting on your defense and your offense, and the length of the game, to not get into a moment where you feel desperate to go for it.”

More plainly, Carroll was not going to make the same mistakes he did in the loss to the New Orleans Saints, when he tried to play catch-up with higher-risk calls, and failed. Sometimes, your swash gets buckled.

“I wanted to attack (the Rams) conservatively, like we were going to beat them,” he said.  “I went into the game thinking that way and wanted to carry it through.

“We could have gone for it, taken a shot. But one thing we didn’t want to do was give them the ball back. We did. They had good field position. There was no question Myers was going to make it. Make or miss wasn’t a question.”

That where the optimism becomes fatal. He no more considered Myers missing than he considered against New England that Russell Wilson could throw an interception from the 1-yard line.

It’s tough being a coach. He went higher-risk against the Saints, and it failed. He went lower-risk against the Rams, and that didn’t work either. At least Thursday, he had enough game left — and Russell Wilson — to survive the presumptive 10-point turnaround.

Typically, the aggrieved parties on fourth-down optimism are fans, because players’ egos are more or less as intense as Carroll’s when it comes to risk-taking.

“They do appreciate it when you go for it,” he said. “They’re disappointed, but I don’t think it crushes them in any way.

“More than that, just do things normally.”

That’s what everyone tells an impulsive person. But rarely is life normal when in charge of a pro football sideline, making decisions every 40 seconds over three hours on national TV.

For most fatal optimists, the circumstances would be just plain fatal.