This wasn’t supposed to be the same caliber Stanford team of years past. Turns out, in a 23-13 loss, the Huskies weren’t even the same Huskies from last week. 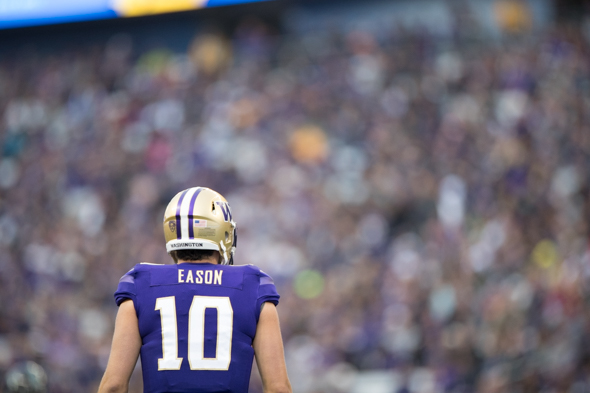 And you thought the Washington Huskies’ annual dork game was the 20-19 home loss to Cal, a contest that at least had the nearly three-hour weather delay that might be twisted, by a guy with huge forearms, into some some sort of pathetic excuse.

Turns out the dork game was Saturday night in Palo Alto. Unless, of course, this is a double-dork season.

System-wide failures were evident in the 23-13 loss (box) to a Stanford team that was a 17-point underdog, impressing almost no one in its 2-3 start.

After a slick, game-opening touchdown drive, the 15th-ranked Huskies offense imploded. An experienced line was unable to create a running game. QB Jacob Eason earned a Cyler Miles-grade effort for his judgment and accuracy. The wide receivers, plus TE Hunter Bryant, lived down to the worst expectations of them in August.

The defense . . . well, including the second half of the previous game against USC, it has given up 782 yards in the past six quarters. It seems as if that nearly every holdover starter has plateaued or regressed, and the new guys aren’t ready to start at the Pac-12 level.

They were up against a second-time starting quarterback, and the injury-bedeviled Cardinal line finished the game with three true freshmen starters. Nobody on the Cardinal was named Andrew Luck, Christian McCaffrey, Bryce Love or Zach Ertz.

It’s probably unfair to suggest that Washington State coach Mike Leach doesn’t have the only fat, dumb, happy and entitled team in the state. But it is fair to note that deservedly maligned former UW coach Tyrone Willingham was able to do something that coach Chris Petersen has yet to accomplish in three tries — win at Stanford.

True, Willingham’s feat was so long ago (2007) that the iPhone was just showing up in stores. Yes, kids, Old Testament stuff.

But it’s fair to bring up the coaching comparison because the game echoed the worst of Willingham — the lack of strategic answers for the unexpected.

“We got whipped, across the board,” Petersen said. “They outplayed us in all phases. They executed their plan a heck of a lot better than we did.

They got after us. On offense, I don’t know if we had enough answers.”

That last remark points directly at the coaching staff, primarily first-year offensive coordinator Bush Hamdan. On a night of widespread futility, the inability of the coaches to dial up countermeasures against a defense that entered the game ranked 115th in passing defense (287.4 yards per game) and 111th in touchdown passes allowed (11) was a shocker.

Heralded QB Jacob Eason was a non-event. He completed 16 of 36 passes for 206 yards, a career-first TD to TE Cade Otton and one interception. In addition, he nearly spun himself silly running from the pass rush, including one horrific sack that nearly dropped him in The Bay.

He counted minus-18 yards in the rushing stats, which left the team total at a miserable 88.

“If you don’t run the ball for 100 yards in our offense,” Petersen said, “that’s going to be a problem.”

Then the news grew worse. After running for a respectable 64 yards in 10 carries, redshirt freshman RB Richard Newton had to be helped off the field in the fourth quarter with a badly injured left ankle. By then, the trailing Huskies abandoned the run and grew desperate to pass, helping account for a whopping 39-21 disparity in minutes of possession.

“It’s like playing an academy school that plays option,” Petersen said. “They get the time of possession and you stand on the sidelines feeling like you got to make all your plays.

“If you don’t, you punt, and they hold it again. The defense was on the field too long and got tired at the end.”

In the first half, Stanford averaged seven yards on first down. Even though the Huskies defense hulked up in the red zone to hold a pair of field-length drives to field goals, the Cardinal led 13-10 at intermission and seemed in control of events.

That happened despite the absence of senior QB starter K.J. Costello (thumb). His backup, junior Davis Mills, was, like Eason,  five-star recruit who showed why when he completed 21 of 30 passes for 298 yards and a touchdown. He was everything Eason wasn’t.

In fairness to Eason, he had little help from his receivers aside from senior Aaron Fuller, who caught nine balls for a career-high 171 yards. He was targeted 17 times in UW’s 34 attempts, a stark sign that the other receivers are not trusted. Fuller and Bryant each had two drops.

Meanwhile, Stanford RB Cameron Scarlett, a 6-1, 216-pound senior from Portland, behind a makeshift line, rumbled for 151 yards on a clock-eating 33 carries.

“It wasn’t surprising what they did — they held the ball, and they converted third down,” Petersen said. “They had about three run plays. Scarlett put his pads down and broke tackles. It was everything we tried to work on in the week.”

But failed. The inability to wrap up Cardinal ball-carriers was acute, as was the failure to disrupt Mills, who was sacked once and hurried once.

The upshot is the Huskies are 4-2 (1-2 in the North Division) and heading in the wrong direction a week after a 28-14 triumph over USC. They have another road game Saturday in Tucson against a 4-1 Arizona team the leads the South Division at 2-0 after beating Colorado 35-30 Saturday.

At least it won’t be a dork game, because the Wildcats appear to be the better team.