11 MLS seasons, 11 playoffs for Sounders. The No. 2 seed Saturday hosts No. 7 Dallas, which in two matches vs. SEA, never scored a goal itself, yet didn’t lose. 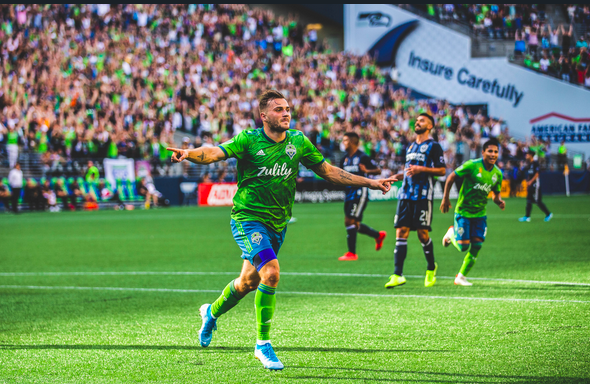 Jordan Morris is likely to be named MLS comeback player of the year. / Lindsey Wasson, SoundersFC.com

The Sounders making the postseason is as sure a sign that it’s October as seeing candy at the front of the local grocery, or witnessing Starbucks customers indulge in pumpkin spice. The club is back, hosting FC Dallas (13-12-9, 48 points) Saturday (12:30 p.m., FS1) as it begins its pursuit of a second MLS Cup.

Seattle (16-10-8, 56 points) has qualified for the playoffs in each of its 11 seasons in MLS, a league record for consecutive postseason appearances.

This postseason offers an updated format. Gone are the criticized, two-legged series and the use of away goals as a tiebreaker, in favor of single-elimination matches hosted by the higher seed.

The move was designed to abbreviate the MLS postseason, long hamstrung by fall’s other annual soccer tradition: The pair of FIFA international breaks that call away the league’s top talent for national team duty.

The first of those breaks stretches was Oct. 7-15, explaining the time between the regular season finale Oct. 6 and the first round of the postseason. By the arrival of the second break Nov. 11, the league will have crowned a 2019 champion the night before.

Stuck with the longest travel distances of any domestic soccer league in the world, home field advantage will be a massive boon to clubs that earned their top spots over 34 regular-season contests.

Seattle is no exception. The Sounders were 11-2-4 at CenturyLink Field, fifth-best home record in the league. The club has a decade-plus of positive play at home — a 12-2-3 record during the playoffs.

Dallas also has lost nine of the 10 games it has played in Seattle, something coach Brian Schmetzer is not eager to have discussed.

“Let’s focus on the why, so we don’t become complacent. It’s the playoffs. You can throw the records out of it.”

In recent years, Sounders seasons seemed to follow to a consistent narrative: A poor start marred by injuries and absences was overcome with late-season heroics that rallied momentum heading into playoffs. The recipe was perfected in 2016, when the club rebounded from a 6-12-2 start and to win the MLS Cup on a frigid night in Toronto.

This year was different. The Sounders have been consistent  nearly all the way through. True, there were setbacks: A 4-7-2 stretch from late May until mid-August, the mid-season retirement of centerback Chad Marshall, a season-ending ACL tear to forward Will Bruin in mid-June and a 10-match suspension for Roman Torres after the centerback tested positive for performance-enhancing drugs.

But for every setback, an answer revealed itself.

Lacking two crucial defensive players, the offense stepped up with late game-winners, as the back line leaked goals. The gate has swung shut in recent fixtures, shutting out three of their last four opponents.

The loss of Bruin was offset by the return of hometown golden boy Jordan Morris, whose 10 goals and seven assists in 26 appearances make him all but a lock for Comeback Player of the Year after missing 2018 with an ACL tear. Despite being limited to 22 appearances following a concussion and a lingering ankle injury, Raul Ruidiaz leads the team with 11 goals.

Even Torres’s absence was resolved by his return for the regular-season finale. The Panamanian, having shorn his iconic dreadlocks, headed in the winning goal against Minnesota United in the 30th minute of the 1-0 win that secured the No. 2 seed in the Western Conference.

FC Dallas claimed the seventh and final playoff spot in the West with a 6-0 beatdown of Sporting Kansas City Oct. 6. The win was a bright spot in what was a dreary September, in which it went 0-2-2, including a scoreless draw against Seattle at CenturyLink Field Sept. 18.

On June 1, the Sounders lost their only other meeting against FC Dallas, on the road in bizarre fashion. Seattle scored all three goals in a 2-1 loss, as defenders Brad Smith and Xavier Arreaga each had a cross bounce off them into their own net.

Rather than relying on one star, FC Dallas scored by committee in 2019, with six players recording five goals or more, led by Jesus Ferreira’s eight goals and six assists.

The clubs have a brief but intense history in the playoffs.

The Sounders won two of three consecutive meetings from 2014 to 2016, the last of which led to Seattle’s only postseason championship. The series have been close; one was decided by a shootout, while another saw Seattle advance thanks to a road goal over the two-legged series.

The matchup seems to favor Seattle. The club’s recent defensive improvements, combined with the return of Torres, should make it difficult for Dallas to find success at CenturyLink Field. Add in an attack that has shown a penchant for goals in big moments (and big matches) in 2019 and there’s a blueprint for playoff success.

A potential limiting factor for Seattle is absence of momentum. While the past few seasons held moments of drama that kept Puget Sound cardiologists in the black, the late-season rallies seemed to have pulled the club and its fans together. The momentum help the club to consecutive MLS Cups in 2016 and 2017, before last year’s playoff run was unceremoniously ended by the Timbers on penalties.

Banking on incredible unbeaten runs just to make the playoffs is not a sound long-term plan. Seattle’s methodical execution yielded the club an impressive 5-2-1 record over its final seven matches.

Now it’s a matter of whether consistency and excellent record at home holds true over the two-week break as the playoffs enter the era of single elimination.

For 11 years, the Sounders have been the picture of playoff consistency. The 2019 season was no exception. Seattle made all the right moves over the course of the regular season. A solution was found for every problem.

Now, the club must demonstrate the same level of consistency in their postseason play to fulfill aspirations of a third final in four years.

Andrew Harvey is a staff writer for Reign FC in the National Women’s Soccer League and serves as the home play-by-play voice for Tacoma Defiance, Sounders FC’s affiliate club in the USL Championship.