Thiel: 49ers give Seahawks a plan for Browns

After the Browns gave up 275 rushing yards to the 49ers Sunday, Seahawks may as well give Chris Carson 40 carries and let Russell Wilson put up his feet. 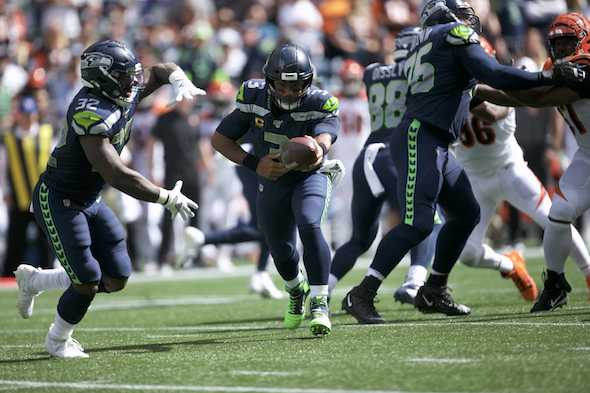 The Seahawks need to do this play about 40 times Sunday in Cleveland. / Drew Sellers, Sportspress Northwest

Based on the Monday night game in which the San Francisco 49ers gashed the Browns for 275 yards rushing in a 31-3 triumph, here’s a brilliantly conceived game plan for the Seahawks game in Cleveland Sunday: Give the ball 40 times to Chris Carson and his fellow running backs, leaving about 10 pass attempts for Russell Wilson.

The Seahawks would win, by about 41-17. Pete Carroll, you can thank me later.

Wednesday in the Seahawks locker room, I suggested the idea to Carson. He smiled.

“I feel like it would make sense,” he said. “But at the same time, we have a Hall or Fame quarterback. You gotta use that weapon.”

True. But I didn’t suggest retiring Wilson at halftime. As we have seen, the more the Seahawks run well, the more efficient Wilson gets with his pass attempts. Few defenses can handle both.

Besides, why subject Wilson to unnecessary risk from a pass rusher as menacing as Browns DE Myles Garrett?  You may have heard that, despite rules protections worthy of Churchill in World War II, the casualty rate among NFL quarterbacks in 2019 is high.

I’d like to claim credit for the 40/10 idea, but the Seahawks have already made some test runs with the concept. Noteworthy was a year ago in Seattle’s first game against the 49ers, when the Seahawks were up 20-3 at halftime after giving Carson 20 carries for 90 yards.

That’s the sort of efficient purity found in nature only with photosynthesis.

The 49ers Monday took the run-first-second-third concept to another level, their 275 yards coming on 40 carries, allowing for 37 minutes of possession. Four turnovers helped, but the stiletto was slipped in on the game’s first scrimmage play when RB Matt Breida, on a brilliant design behind a block by FB Kyle Juszczyk, went 83 yards for a score.

It began an overwhelming night for the Niners, at 4-0 off to their best start in nearly 30 years. Whoever presumed the run game is dead in the NFL apparently goes to bed before West Coast games.

“(The Browns) got stung right off the bat,” Carroll said Wednesday. “It was a play that they stopped later. It just got out one time; they made a mistake on it. You saw a real committed running team from San Francisco. They stayed after it and they had plenty of success. They had some big plays and kept the yardage popping. Such a hard start (for the Browns).

“That night was San Francisco’s night. It didn’t matter what happened, really. The ball kept coming their way and they kept making the plays. They looked great.”

As a partial result, the Browns (2-3) defense is giving up a per-game average of 150.8 rushing yards, 29th in the NFL. Even Carson couldn’t quite understand it.

“They’re banged up in the secondary with two corners out, but it was just weird because they got a good defense,” he said. “The front group is great, and linebackers come downhill and play the run pretty well.”

Carson was impressed with Breida’s burst as he ran away from defensive backs.

“Was it 22 miles an hour?” Carson asked, the figure quoted on broadcast as Breida’s top speed. When asked to offer his best clocking, he was quick.

The confidence flows from a guy who played on a Sunday (104 yards rushing) then a Thursday (118), plus five receptions for 46 yards combined, and doesn’t seem at all worn.

“Friday I was all good, then Saturday I realized I took some hits,” he said of the mini-bye weekend after the Rams win. “It’s the recovery that’s important. I love Thursday games because you have so much time to get your body right.

The man seems close to indestructible, and the Browns defense seems kinda crumbly. So the game plan makes sense, right?

The 49ers’ game plan was so ruthlessly effective that it blew up Carroll’s Monday instruction to players to watch the game between opponents they play three times in the final 10 regular-season games.

“I don’t think it was my best assignment as a teacher,” he said. “The game didn’t work out. I was hoping it was going to be a real battle. The game kind of got lopsided, so it wasn’t as beneficial.

“It’s still really good to see the (opponents). You hear the stories about the players and the backgrounds. The guys will come in here today much more familiar with them.  Too bad it wasn’t a better game.”

Then again, it laid out the plan, which would then create opportunity for Wilson to become the first quarterback MVP in NFL history to have a regular-season game of, say, eight completions and five touchdowns.

BTW, Seahawks at 49ers, Nov. 11, Monday night football. Get your Jim Harbaugh inflatable dolls out the closet, and test for leaks now.