The Seahawks’ best O-lineman, LT Duane Brown, is likely out Sunday for the game in Cleveland, as is RG D.J. Fluker. Ethan Pocic was put on injured reserve. 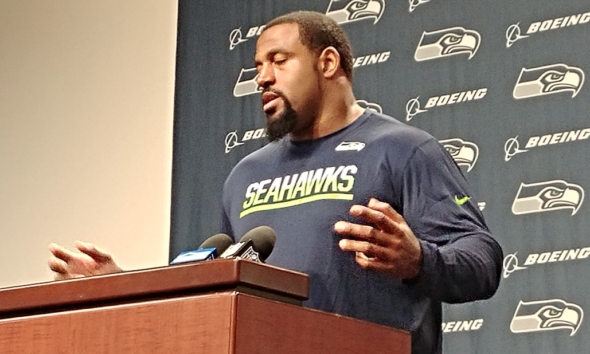 Duane Brown has started 30 games for Seattle since his midseason trade acquisition in 2017 from Houston. / Art Thiel, Sportspress Northwest

The Seahawks offensive line is in injury trouble — two starters, LT Duane Brown (biceps)  and RG D.J. Fluker (hamstring) are likely out of Sunday’s game at Cleveland (10 a.m., FOX), and versatile backup Ethan Pocic was put on the injured reserve list with a back problem.

Brown, Seattle’s best O-lineman, played the past two games despite a muscle damaged in the Saints game. He didn’t practice Friday and is officially listed as doubtful.

“That means that when you’re as optimistic as I am, there’s a chance,” coach Pete Carroll said after practice Friday, after which the team left for Ohio. “There’s a chance. He couldn’t practice today.

“It’s not responding as well as we had hoped.”

Carroll praised Brown’s toughness for going the whole way in the Seahawks’ 30-29 win over the Rams Oct. 3.

“That was heroic — he just toughed it out,” he said. “It was hard and really uncomfortable. He wouldn’t say anything about it, and finished the game. Couldn’t have been more admirable the way he pulled off a great game for us.”

In the same game, Fluker strained a hamstring early on and had to come out. He was replaced by second-year OL Jamarco Jones, who had been a tackle throughout his college career at Ohio State, as well with the Seahawks. But without Pocic, Jones changed positions and sides of the line to fill in well for 65 plays.

Among all Seahawks linemen in that game, Pro Football Focus graded Jones highest, despite the fact that he was often up against the best defensive player in the NFL, Aaron Donald.

“It’s really first class (to) come through for us, that he went over there and played so admirably under the circumstances,” Carroll said.

But he played it coy when asked whether Jones would get his first career start Sunday.

“We got to get that worked out,” he said. “If you don’t mind, we’ll let you know on the weekend. There may be an edge there somewhere for us. I’m not sure there is.”

However mysterious Carroll wants to be, Jones seems the logical choice at guard, while George Fant is the likely replacement at left tackle. But that would take away a tool Carroll covets — the tackle-eligible extra blocker Fant plays as a nominal tight end in the jumbo package.

Carroll wouldn’t say whether anyone else would step into Fant’s role.

He didn’t minimize the loss of Brown.

“If Duane’s not ready to play, you’re losing a lot of experience and a lot of vision that he has, and he shares,” he said, suggesting much will fall to Justin Britt. “He’s got to have a really good game for us. He and (Russell Wilson)s have to communicate really well.

“The perception (Brown) has is extremely unique, and you’re going to miss some of that.”

To help compensate for the loss of Pocic, who hasn’t played the past three games and won’t be eligible to return for the next eight, the Seahawks promoted OL Jordan Roos and TE Jacob Hollister from the practice squad. To make roster room, the Seahawks also waived safety Adrian Colbert.

The good health news was that RB Chris Carson, who appeared on the Thursday report with a shoulder problem, was a go for Sunday.