4 TDs in the first 5 drives of the second half rescued a moribund start and gave the Huskies a 51-27 win at Arizona, reviving their dignity in time for Oregon Saturday. 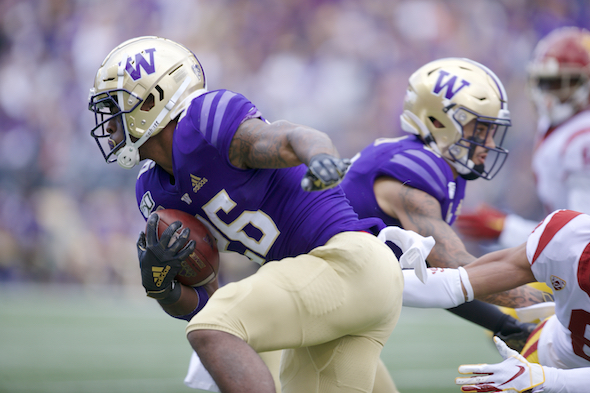 After six consecutive quarters of brutal college football, the Washington Huskies heard the giant sucking sound of a season going down the drain. Or, it could have been the Oregon Ducks snorting heavily. Whatever the source of the early audio horror on a warm Saturday night in Tucson against the University of Arizona, a moment was at hand.

“We started slow,” said QB Jacob Eason. “We got in locker room at halftime and checked ourselves. There was a lot of talk. I spoke. I’m not one to speak a lot, but I felt it was necessary.”

Whatever were the subsequent words, someone needs to transcribe them, print them large and put them under glass for posterity. They helped produce touchdown drives on four of UW’s first five second-half possessions (249 yards) to brake the plunge and create a surprising 51-27 triumph (box) from the mud, leaves and entrails of a wretched first half.

Or perhaps it was the fear of going into Oregon week looking and acting as hapless as Seindfeld‘s Kramer, evidence for which was 16 consecutive drives over two games without an offensive touchdown.

Whatever the inspiration, it retrieved from the precipice the dignity of coach Chris Petersen, who had not lost two games in a row since 2015. The outcome that seemed all but certain after trailing 17-13 at the half while gathering the pittance of 135 yards of offense and four first downs.

“The first half was maddeningly frustrating,” he said. “We just didn’t capitalize. We just had to keep swinging. That’s how the game goes sometimes.

“It was a weird game. It felt like (in the first half) we couldn’t get any rhythm going. We had unbelievable field position, the defense played great, and we did nothing in the red zone.”

In the second half, Eason came out afire, completing eight of his first 10 passes for 178 yards and TD throws of three yards to TE Jack Westover and 22 yards to Aaron Fuller. The ground game, which had 69 yards in first half, piled up 207 in the second half, led by 106 yards from Sean McGrew on 13 carries, and 95 on 23 from Salvon Ahmed, who had touchdown runs of four, three and 10 yards.

Injuries accounted for at least some of the first-half offensive problems. RB Richard Newton stayed home with an injury, as did C Nick Harris, and RG Jaxson Kirkland went out early with an unspecified injury.

Eason was 15 of 22, but made the throws count for 243 yards, and his much-derided receivers this time hung onto his fastballs, including three for 97 yards to heralded freshman Puka Nacua.

“He showed up and made big plays,” Petersen said. “That was as heart-warming as anything I saw tonight.”

The night’s premium kudos went to the defense, which was worked over the previous week by Stanford but took out its self-loathing on the Wildcats, which entered leading the Pac-12 South with a 2-0 mark, 4-1 overall.

The Pac-12 Conference’s No. 2 offense was throttled — four turnovers, four sacks, nine tackles for loss and a scoop-and-score, five-yard TD by LB by Brandon Wellington that was Washington’s only first-half touchdown.

The score was generated by feared senior QB Khalil Tate on the worst in a series of surprisingly dubious plays for the only player in conference history with games of 400 yards passing and 200 yards rushing. From his own 25, he was sacked for a 15-yard loss by DE Benning Potoa’e, but before landing seemed to pitch the ball backward, despite no teammate being anywhere near. Wellington had one of the easiest scores in UW history.

After a 404-yard passing day the previous week against Colorado, Tate had 184 Saturday on 13 completions, and finished minus-28 in rushing. The Huskies, with a new starter at safety in freshman Asa Turner and increased time for sophomore LB Ariel Ngata, seemed to anticipate well Mack’s choices. They also held top RB J.J. Taylor to 89 yards in 18 carries.

“Those are their superstars,” Petersen said. “Our defense played so well the first quarter and a half — we should have had bunch of points. You knew (the Wildcats offense was) going to come back.

“Tate is so dangerous when he scrambles, and we contained him really well. We were equally worried about Taylor. He’s as explosive as anybody in the league. We tackled him really well, and keeping him under 100 yards is pretty good.”

The 27 points were the most given up this season by the Huskies, but given the degree of difficulty winning in the desert — Saturday was only the second win in the past 13 visits to the Arizona schools — Petersen wasn’t complaining.

“It’s hard to come to Arizona — it’s a long trip,” Petersen said. “The first half was not good enough. It was not and everybody knew it. I’m really pleased and proud how these guys responded in the second half.”

Fortunately for Washington (2-2, 5-2), both are at Husky Stadium. But no amount of hooting and heckling will make a difference against the Ducks and Utes unless the Huskies do something they have yet to accomplish in conference play — stringing together four quarters of that that don’t include stumbling and bumbling that ends in a humbling.