Pete Carroll hopes that another harrowing win by the Seahawks, 32-28 in Cleveland Sunday, is another teachable moment in a nearly absurd string of them. 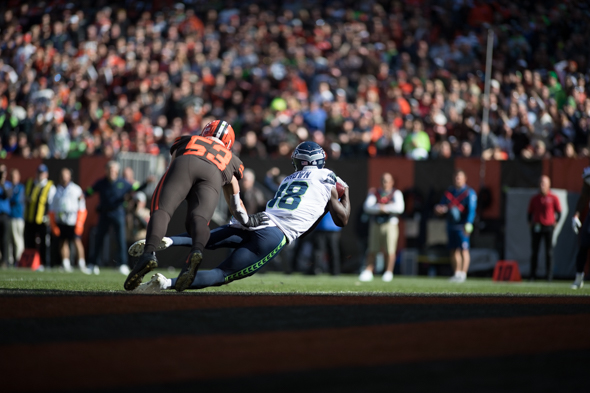 WR Jaron Brown had three catches, two for touchdowns, including this one in the third quarter. / Drew McKenzie, Sportspress Northwest

Amid the shards, leaks, broken glass and trash fires of a 20-6 deficit Sunday in Cleveland against the irked Browns, it seemed apparent that as good as the record was, the 2019 Seahawks weren’t going to be a dominant team. Just too many talent deficits to be championship caliber.

Then, after the acrid smoke dissipated to reveal a 32-28 (box) Seattle triumph, one requiring surviving a foreboding set of sequences that could only have been created by J.R.R. Tolkien with a migraine, the Seahawks were 5-1.

Yes, it’s only mid-October. But here’s the counter-point.

What if the NFL’s fourth-youngest team, you know, learns?

Four of the Seahawks wins have been by one, two, one and Sunday’s four-pointer, plus a solid 27-10 win at Arizona. Each game contained problems solved and perils avoided. It’s a way a good team gets great.

“Every game’s been hard,” said coach Pete Carroll. “These are character-builders that will make us better. We need all of these situations that happened today.

“These guys are all together. They’re connected. That’s why you can make it through the tough stuff. When we make an error, another guy pulls him up and helps fix it. That’s why we’ve been so positive for months and months with this team, sensing this makeup is part of it.”

Those are developments that cannot be dissected via analytics, nor measured with metrics. But since the Seahawks are 3-0 on the road for the first time since the Carter administration (1980), and 13-6 in the last 19 road games with the formerly dreaded 10 a.m. PT start, Carroll’s claims are hard to refute. Especially since 5-1 happened previously only twice in team history (2003 and 2013).

That doesn’t mean that the presence of will and and a good plan will always overcome a deficit in talent. But since the margins between good and bad in the NFL are thinner than in any sport, it’s possible to get farther faster if a team is purposeful and cohesive.

Russell Wilson’s helmet communication system went out during a third quarter drive, so he called his own plays and led the Seahawks to a TD 💪💪 @DangeRussWilson pic.twitter.com/hBuT0qTm76

The alternative was visible in the Browns. With a first-year head coach and a second-year quarterback, their emotional edge — at home and raging after a 31-3 national embarrassment to the 49ers Monday night — evaporated in a hail of mistakes in need-to-win moments.

The Browns gave up the ball four times (three interceptions and a fumble), had a punt blocked and lost 83 yards with nine penalties, many of them critical to sustaining Seahawks drives in the second half. The Seahawks, on the other had, persevered.

“There was so many opportunities to let this game go away from us,” Carroll said, “and our guys just would not do it.”

Examples were numerous, but two sequences, one on offense and one on defense, stood out to illuminate.

Trailing 20-12 with 1:36 left in the first half,  FS Tedric Thompson picked off in the end zone a tipped pass from QB Baker Mayfield and returned it 12 yards.  From there, QB Russell Wilson needed just 1:07 to go 88 yards in eight plays, completing four of six passes, including a 17-yard beauty in the end zone to WR Jaron Brown.

The interception and textbook drive included rushes of four yards by Chris Carson and an 11-yard scramble by Wilson, who had 22 completions in 33 attempts for 295 yards, that turned a potential 27-12 deficit into a field-goal differential.

On defense, early in the fourth quarter and ahead 25-20, the Seahawks turned away the Browns on a goal-line stand after a 10-play grinder suffused with all manner of penalties, mistakes and apparent referee confusion.

On fourth-and-goal at the Seattle 1-yard line, Nick Chubb, a great young running back who had 122 yards on 20 carries, was dumped for a one yard loss by DTs Poona Ford and Quinton Jefferson. Seahawks ball.

All that, after giving up touchdowns on Cleveland’s first three possessions of the game.  Apparently, learning can happen rapidly.

“The goal-line stand — all that it took, and the things that happened down there — was an extraordinary sequence, but our guys stopped them,” said Carroll. “I was so fired up about that. That’s when football is at its very best. The height of intensity, the most intense moments of a game, and our guys figured out s way to get off the field.”

But not for long. The offense, stuck at the one, went three-and-out and P Michael Dickson shanked in haste a punt that traveled 24 yards. The Browns scored in two plays, and with a two-point conversion, led 28-25.

Carroll admitted the sequence was his error. He wanted Dickson to accept a safety and send the subsequent punt deep, to avoid exactly what happened — a Browns short-field TD.

“We didn’t handle it very well — I messed it up,” he said. “I was signaling to Mike, and he didn’t see me. I should have called  a timeout. It was a perfect time to do (take a safety) and kick the ball out.”

The players had the coach’s back.

Wilson took the Seahawks on a nine-play, 79-yard drive for the winning TD from Chris Carson, then the defense sealed it with another tipped-pass pick, this by LB K.J. Wright.

The outcome again was harrowing. But the kids learned another lesson: The NFL is not a beauty contest, but a survival test. Gold stars for everyone Sunday. 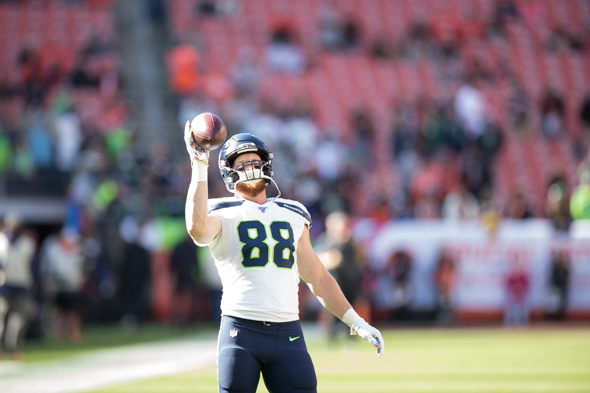 TE Will Dissly, warming up for the game in Cleveland, tore his left Achilles tendon in the second quarter. / Drew McKenzie, Sportspress Northwest

Dissly likely out for season with Achilles tear

TE Will Dissly’s season is over early. Again.

A non-contact tear of his Achilles tendon — on the left leg, the one didn’t have surgically repaired a year ago, when he tore his patellar tendon — sent a shock wave through the Seahawks Sunday.

“It’s a serious one; a big loss,” Carroll said. “He was in the open field. It just happened like Achilles do — out of nowhere. It’s a devastating injury for him.

“Every play he was in last year and this year, he was a top-flight competitor.”

In five games this year, he had 23 catches for 262 yards and four touchdowns. A year ago, the former fourth-round draft choice out of the University of Washington had eight catches for 156 yards and two TDs before his injury.

He had become a staple in the offense, with route-running as reliable as his blocking.

Achilles tears can take a long time to heal, as former Seahawks star Richard Sherman can attest. His tear in the middle of the 2017 season wasn’t fully healed until the start of the 2019 season.